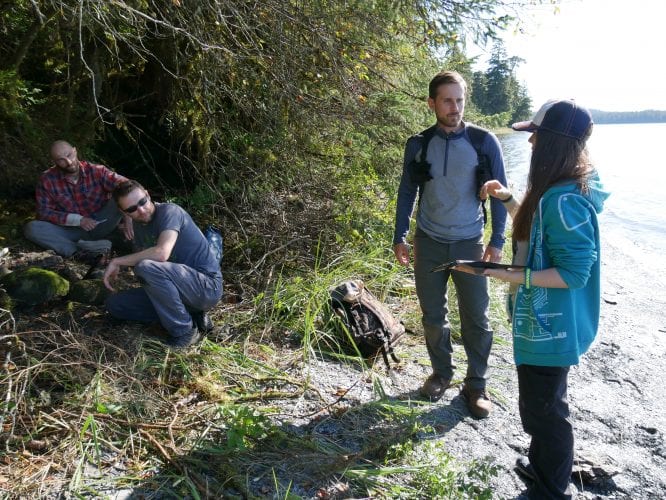 A Petersburg couple is in the midst of making a full length feature film locally. Heather and Brandon Thomas hired a few outside actors but are mostly relying on friends and family to produce the drama, The Last 40 Miles. KFSK’s Angela Denning reports:


Along the rocky shores of Mitkof Island, the scene is set. Two actors are huddled near a campfire under bushy trees along the bank. Director Heather Thomas is nearby. She’s in her comfort zone telling others what to do. She knows exactly what she wants.

“I’m looking for a nice open shot of you guys,” Heather said. “Not super wide. But I want this to start with the two of you.”

Thomas wrote the entire script herself and will be editing the finished product too. The story idea came to her over two years ago and she then spent about a year writing it out.

“I think I’m best at being bossy so writing, and directing, and editing because I’m a control freak,” Thomas said, semi-joking. “Start to finish I like to be involved with everything. I have a very clear vision and I think that’s probably the only way to pull that off.”

Thomas has had a clear vision of what she’s wanted since the beginning. She set up a framework of what she could accomplish with a limited budget. And she wrote the script to fit that.

“In a way it kind of helped having all these limitations location wise and budget wise because then I made sure not to put in too many shots that were going to take a ton of time or were going to take a lot of money,” Thomas said. “Some days when we’re shooting I’m actually like, ‘Oh, man, this is easy, we don’t have to relocate, we don’t have to do this. And [then I realize], ‘Oh, right, we did that on purpose. We wanted to go to bed and get a full night’s sleep and get out here and do this’.” 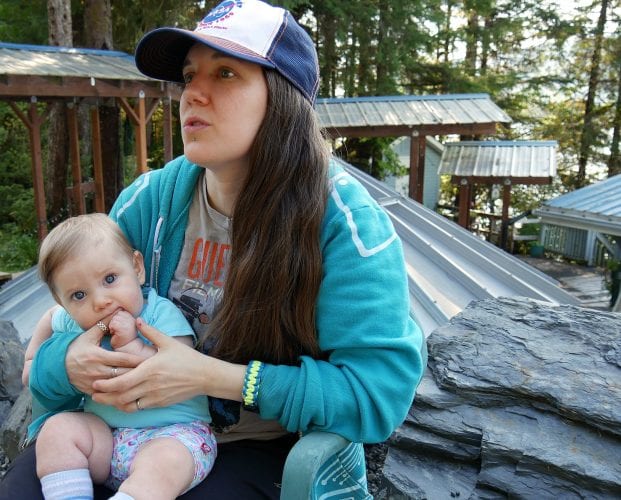 Handling the camera work is Heather’s husband, Brandon Thomas. Together, the couple owns the local production company, Rocket Raptor Films. Brandon’s day job is at the U.S. Forest Service and Heather takes care of their two young children. But on the side, the couple does contract work for filming and photography. They have one movie under their belt, a short zombie film produced five years ago called Dead End Job. Heather has worked on a few movies in the Lower 48 but this is the first one that is entirely theirs.

“Pretty much everything we’re doing on our own,” Thomas said. “We saved the money to do it, we’re paying for everything and it’s 100 percent ours.”

The Last 40 Miles is a survival story about a man who is deep in the Alaska wilderness on a hunting trip when something catastrophic happens. With no contact to the outside world, he sets off in a kayak to paddle nearly a thousand miles back to his family. Along the way he meets another traveler whose intentions are questionable. Heather says ultimately it’s a character driven story.

“How can you trust somebody when you have no idea what’s going on and you spent months by yourself just struggling to survive?” Thomas said. “Do you just abandoned somebody or do you help them or do you try and together figure out what happened? Is it worth the risk because can you really trust people? Are you ever going to find your family? Could this guy somehow get in the way of that?”

The couple hired actors Kamy Bruder from L.A. and Brady Roberts from Canada to play the film’s main roles. They chose Bruder from about 200 applicants and Heather knew Roberts before the project and he was on board from the get go. Otherwise, the couple is relying on friends for running audio and on-the-set assistance. They have also saved time and money by looking to friends for shooting on private property. 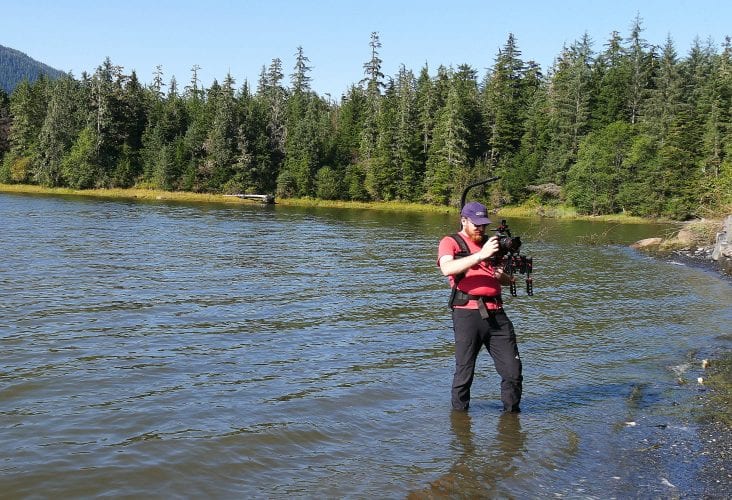 Brandon Thomas gets ready for shooting The Last 40 Miles along the Narrows near Petersburg. (Photo by Angela Denning/KFSK)

“We found a lot of really great locations from friends and family and people who just offered to help us out,” Thomas said. “So, it’s been nice because I anticipated having to pay for a lot of permits every day and the cost associated with our locations has been next to nothing.”

The Thomas’ plan to have the film edited in the next few months and hope to have a screening in Petersburg by the first of the year. After that, they will seek distribution. Heather says their main goal is not to make money on their first full length feature but for as many people as possible to see the movie.

She would like to host screenings all over the state.