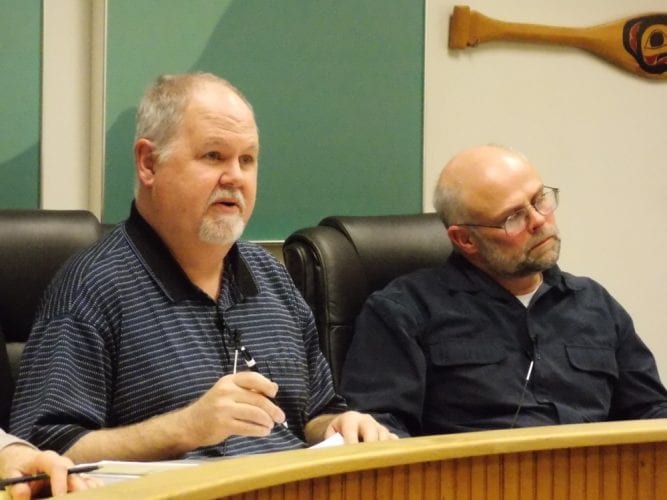 Petersburg’s borough assembly Monday voted to extend the contract for the borough manager and give him a raise. That was after approving a positive job performance evaluation and hearing support from former assembly members.

Steve Giesbrecht started as manager of the city of Petersburg in October of 2011. Before that he was city administrator in Electra, Texas. As borough manager he’s making over 116,000 dollars a year and his current contract runs through November of 2018.

Former assembly member John Hoag said he well aware that some had run for office opposing Giesbrecht’s continuation and urged those assembly members to reconsider.

“Steve’s evaluation, the highest marks are for fiscal responsibility,” Hoag said. “We’re gonna be facing a fiscal crisis the next few years.”

Giesbrecht was evaluated by department heads and the assembly for his job performance in 2016 and into 2017. The 18 who evaluated him all rated him as meeting job standards, exceeding standards or outstanding. Former mayor and assembly member Cindi Lagoudakis also sent in a letter in support of the manager, along with other members of the public.

Current assembly members also were in support of the job Giesbrecht’s been doing and approved the evaluation that most of them completed earlier this year.

It’s a security thing for sure,” borough clerk Debbie Thompson responded. “He probably would feel like he needs to start looking for another job pretty soon. It takes a while to find a city manager position that you probably wanna take. That’s just my take on it.

“And my two cents worth is that we are going to be demanding quite a bit from him here this coming winter,” said assembly member Kurt Wohlhueter. “If he knows that he has some skin in the game for more than just one year, we will get more performance out of him. Don’t think you’re gonna get off easy Steve. At least not from me.”

“In addition to what Kurt said, he’s got four year’s of experience watching income drop,” said assembly member Nancy Strand. “So I think we’d be fools to let him go, to get rid of him.”

Marohl also asked about the increased retirement matching money and the vehicle allowance. Mayor Mark Jensen wanted to clarify that the manager would still receive one year’s salary as severance pay if he’s terminated without cause, or receives nothing if the assembly terminates his contract with cause.

“So the severance is part of the, again that’s the key issue to making sure that I’ve got some security,” Giesbrecht responded, “that if the assembly changes directions and wants somebody else in here, then I’ve got time to look for a job.”

“So I just wanted to make sure that it was still the same and I assumed it was which, asking for a five-year extension of the contract seems a little long to me but, that’s not going to keep me from voting for this, that’s just how I feel,” Jensen said.

Marohl agreed that five years seemed long for an extension. Nevertheless, the assembly voted 7-0 to approve the manager’s proposal keeping him on with the borough through through November of 2023.