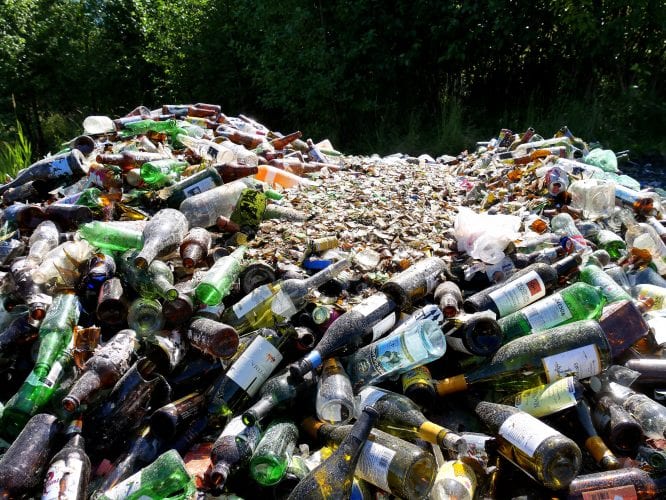 A pile of glass at the Petersburg landfill gets crushed and used in layers to build a road. (Photo by Angela Denning/KFSK)

Many communities in Southeast Alaska recycle, but none of them recycle glass in the traditional sense. As part of the CoastAlaska series Talking Trash, KFSK’s Angela Denning looks at some of the challenges of recycling glass and what communities in the region do with it instead.

Most recyclables in Petersburg go into a single bin at people’s homes. Plastics, aluminum, paper, it’s all picked up by the borough once a week.
But glass is different.

If residents want to recycle glass they must bring it to a dumpster like this one, labeled “Glass Only,” and drop bottles through a hole in the lid. There’s three of these drop offs around town. 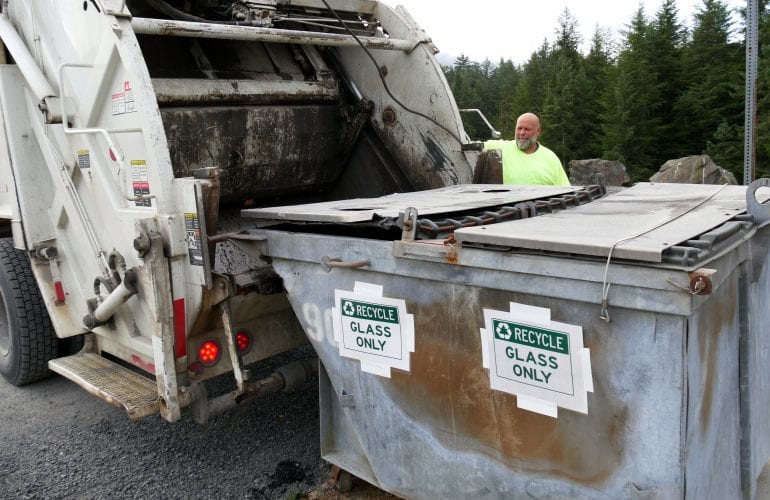 In the first half of this year, the borough collected 50,000 pounds of glass.

“It does save money,” said Karl Hagerman, Public Works Director in Petersburg. “Any weight that we can take out of the solid waste stream, we’re saving that money. It removes it from the waste stream, it’s not in our recycling stream. It’s the best solution right now.”

For years, the town has shipped its trash to Washington because it’s cheaper than maintaining it in the local landfill. The borough pays about $113 a ton to ship solid waste and about $20 a ton for recyclables because there are rebates for reusable products. But that wasn’t always the case. When glass was included in recycling, the borough could sometimes pay more to ship it than the trash.

“It was a huge problem,” Hagerman said. “The amount of glass that was included in our recycling stream became a burden to the recycling facility in Seattle.” 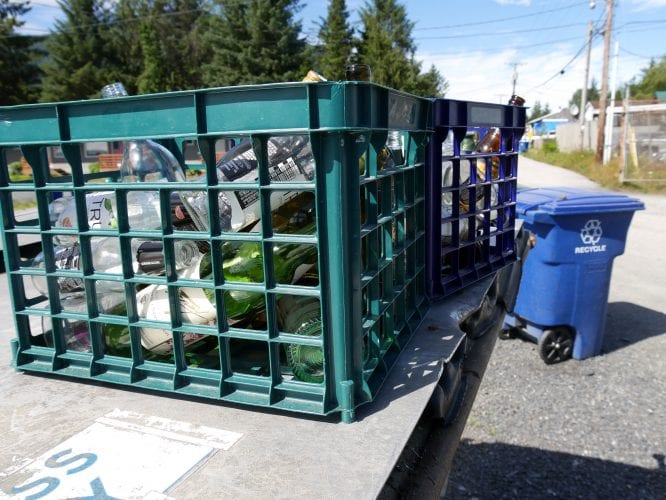 Crates of glass bottles sit on top of a “glass only” dumpster in Petersburg. (Photo by Angela Denning/KFSK)

“They can only receive as much as they can use,” said Matt Stern, Director of Recycling Operations for Waste Management-Pacific Northwest. “So, it’s not an unlimited market.”

Stern says fewer facilities are processing mixed glass now. In the area that Stern covers—Idaho, Oregon, and Washington–there’s only one remanufacturer of glass, located in Seattle. He says mixed glass takes extra sorting.

“It tends to have a certain portion, 10 plus percent of non-glass material with it,” Stern said. “Whether it’s plastic caps or chicken bones or whatever might make it in with the glass.”

The colors have to be separated too.

Another reason there’s not much interest in glass is because of the material. Glass is mostly silica or sand and it’s just not valuable.

“There’s no shortage of sand,” Stern said. “As so it’s not replacing sort of a critically limited resource, so I think that’s part of the problem.”

The flip side of that is that glass is arguably better for the landfill than toxic products such as plastics. It doesn’t leach chemicals into the soil.

Which brings us to Petersburg’s landfill. We drive to the back where the sanitation department is building an access road. It’s made from layers of rock and broken up glass. 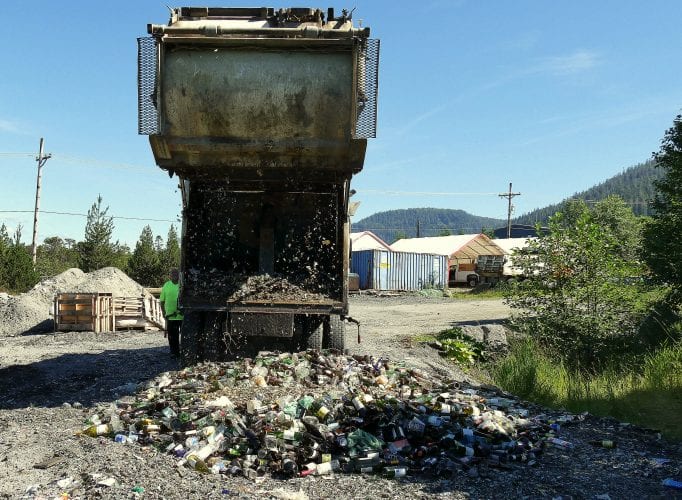 Petersburg Public Works employee, Kevin Granberg, empties crushed glass from a dump truck onto a road at the landfill. (Photo by Angela Denning/KFSK)

This dump truck crushes the glass into small chunks in the back of the bed. Then the back door lifts high off the ground and a rainbow of glass comes raining down onto the road.

What’s left is a heap of shining pieces in greens, blues, browns and clear.

Petersburg is not alone. Nearly all of the communities in Southeast do something similar. Ketchikan, Sitka, Skagway, and Juneau also collect glass, crush it, and use it at the local landfill. Wrangell doesn’t have a landfill anymore so it ships its glass south with the trash. Haines’ private landfill wouldn’t talk about what they do with their glass.

In Juneau, Jim Penor is the solid waste coordinator for the city and borough. He’s been in the business for nearly 45 years. He says the challenge with recycling glass is its heavy and it’s not worth much.

Some Southeast towns are looking at using glass for road beds, sanding icy surfaces and other uses. Penor says that would be great but it’s an expensive process.

“You’ve got to crush it, you’ve got to remove any labels or any paper that’s possibly on the glass has to come off,” Penor said. “Then it has to go through another crushing machine. And then it goes to the fine, making the mesh glass and now that’s usable.”

He says the necessary equipment is just over $3.5 million. Petersburg’s Karl Hagerman would like to pursue that possibility in the future. But for now, Petersburg, Juneau and many other towns in Southeast will continue to encourage residents to separate out their glass and save their communities some money.