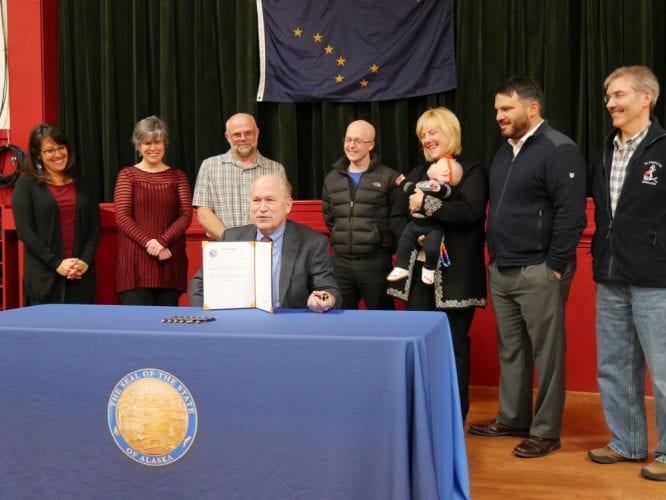 A major increase to the land granted to the new Petersburg borough is now official. Governor Bill Walker Thursday signed legislation granting over 14-thousand acres of state land to the local government.

Governor Bill Walker signed the bill at Petersburg’s Sons of Norway Hall and spoke about putting lands under local control.

“Im not a big fan of someone in another state saying what we can do in our state,” Walker said. “And nor do I think we oughta be saying here what they can do in their state. They oughta do their thing, we do our thing. So this is sort of a version of that, is that you didn’t get all the land you were entitled to, I’m only too happy to put my name on the signature and again all the credit goes to those that have spoken before me because they did all the heavy lifting. I get to hold and kiss babies and sign documents…”

Under state law cities and boroughs are entitled to select 10 percent of available state land within their boundaries. When voters approved the formation of the Petersburg borough in 2013, it meant expanded boundaries for the municipal government and an additional land selection beyond what had already been chosen by the city of Petersburg. Borough officials went to the legislature this year to increase that amount and scored big. Senate bill 28 is nearly a tenfold increase in the land grant and allows the borough to take 14,666 acres.

The bill’s sponsor Sitka Senator Republican Bert Stedman was out of state but his staffer Melissa Kookesh said the legislation will give the borough opportunity for future economic growth.

“That’s vitally important in this climate that we have and I know Senator Stedman was very happy about that but again sends his regrets for not being here for this historic event,” Kookesh said. Kookesh helped shepherd Stedman’s bill through the legislature and noted it was her first. Sitka Democrat Jonathan Kreiss Tomkins introduced a companion bill in the House.

The bill saw no votes of opposition in the legislature and was one of only a couple dozen passed by both the House and Senate this year. It’s almost all of the remaining state land in the borough that hasn’t already been designated for another use. Parcels are spread throughout the borough and could be sold off to generate revenue from the sale and property tax from future owners. Some parcels could also be developed for rock and gravel pits or other uses.

Mayor Mark Jensen thought the borough would have many ways to use the land. “Some of it’s going to hopefully be used for mitigation for projects and maybe on the island for some rock sources, so there’s many, many uses and I think now it’s up to our land selection committee to pinpoint down what we want,” Jensen said. “And then of course before you can do anything I understand it all has to be surveyed. So I don’t know the specifics but there’s a ways to go before we could actually probably put it up for sale or develop or whatever we’re going to do.”

A committee of local residents met into last year to determine top priorities for a smaller land selection. With the increase, they’ll have to restart meetings to lengthen that priority list. The state Department of Natural Resources values the total land grant at more than 78 million dollars.