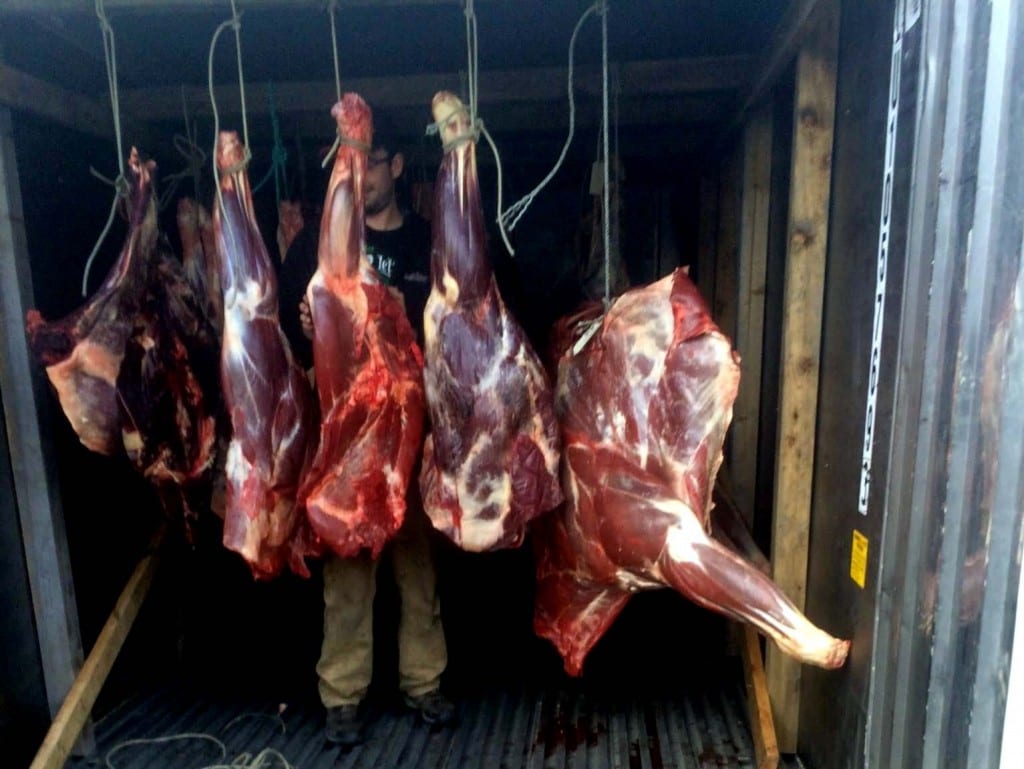 These are legal moose quarters hanging after the 2015 hunt. (Photo courtesy of Peter White)

Hundreds of pounds of free moose meat are given away every year in Petersburg. KFSK’s Angela Denning reports on a program that takes illegal moose kills and gets the meat to families in need.

Free ground up moose meat is given away every year to Petersburg schools and non-profits.

But first let’s back up to where the meat actually comes from. Every fall during the month-long moose hunt, a handful of hunters inevitably kill some moose illegally. It’s not intentional. It’s just not the easiest hunt because it requires specific antler configurations.

“Just the general population, the morphology of the antlers around here, we’ve got some of the hardest antlers to judge and some difficult conditions,” Litster said. “So one reason or another we end up with a lot of illegal moose.”

Every year several moose are illegally killed near Petersburg, Kake, and Wrangell because their antlers don’t meet the requirements.

This year twelve moose in the hunt area became state possession. The moose are divided among communities in the unit. Five of the moose went to Petersburg this year. Each animal produces about 120 to 300 pounds of ground meat depending on the size.

The meat give-away program is more organized that it was just a few years ago. Back then, Litster used to drive around town in his truck asking folks if they wanted moose meat. But he says that was inefficient.

“The problem has been over the years that a moose is such a big animal, what do you do with it?” Litster said. “Especially if you get a handful of them in a small community, really quick you can tap out the resources that people have available to take care of moose.”

The community formed a committee to address the issue. The committee identified charities in town that could use larger sized portions of meat like the schools and the Mountain View Manor Assisted Living Facility.

The hunter plays a role too. They hand over the illegally shot moose to Litster skinned and quartered and also pay for the processing. Litster says the court can include the processing fee in lieu of the hunter’s fine. He then delivers the meat to a processor and after it’s ground up it’s stored at Community Cold Storage in town.

The ground up meat then gets distributed to two non-profits, the Rotary Club and the Salvation Army Church.

“It’s worked out through the Salvation Army where non-profit organizations can come in and get large chunks or families can come in and fill out a declaration of need and get small chunks,” Litster said.

Litster says the new program is the most equitable way to get the moose meat to people who need it.

For more information about the meat program you can contact the Salvation Army in Petersburg or the Rotary Club.