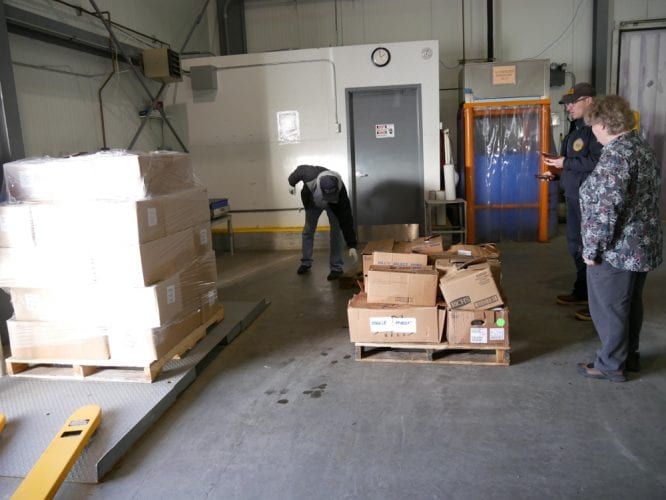 Volunteers picked up hundreds of pounds of moose meat from the community cold storage in Petersburg last Thursday afternoon, for distribution around town. Service organizations and the schools will make use of the forfeited meat from this fall’s hunt.

Petersburg Community Cold Storage manager Marv King wheels two pallets into the front area of the building. The pallets are stacked with boxes and contain hundreds of pounds of forfeited moose. State wildlife trooper Cody Litster said the meat is ground up and packaged in two and five pound packs.

“Hammer and Wikan and Tonka Seafoods processed the meat for us,” Litster said. “So we’ve got two different pallets. We’ll see how much each of those are and today we’re taking, we’re gonna leave the school’s share here and then the other share we’ll move to the Salvation Army freezer for their distribution. So we’ll see how much we’ve and how far it’ll go.”

The two stacks represent the meat from five moose shot during the month-long hunting season in September and October. The animals did not meet strict antler requirements set by the state. In total 12 moose in this year’s record-setting season were taken by the state and divided up between Petersburg, Wrangell and Kake. Hunters forfeit their kill and if the court agrees can pay the cost of processing instead of a fine.

Last year was the first year for an official distribution program that involves the court system, schools and local service agencies. Before that it used to fall to Litster to drive around town with the meat and ask people if they wanted some. Now others are involved.

“Well the Salvation Army is going to disburse it to, there’s 10 service organizations in town,” said Salvation Army major Loni Upshaw. “So, I don’t know if I’m going to keep any at all for food boxes but we have an extra agency so. It’ll depend on how much we get but I wanna make sure the service agencies which are child centers, the manor, the hospital and other people that feed homeless people. So they’re gonna get it. It’s more for them.”

It’s Upshaw’s first year in town and her first time with the distribution but thinks it’s a good program. “I haven’t worked with it yet. I don’t know about carrying a bunch of moose meat around but most of the people I’ve called they’re willing to come pick it up to pick it up for their agency,” she said. “So that’s the good thing. And I know that they are blessed and honored to get this. I know it’s hard for the people who lost their moose but hopefully they can get a little bit of it some place down the line.”

The total is just over 1400 pounds. Volunteers help split that into two stacks. Nearly 800 pounds will go to the 10 service organizations through the Salvation Army. That’s almost 80 pounds apiece and nearly double the distribution from last year according to Upshaw. The rest will go to the school’s food service program and will wind up in moose tacos and other lunch offerings throughout the year.