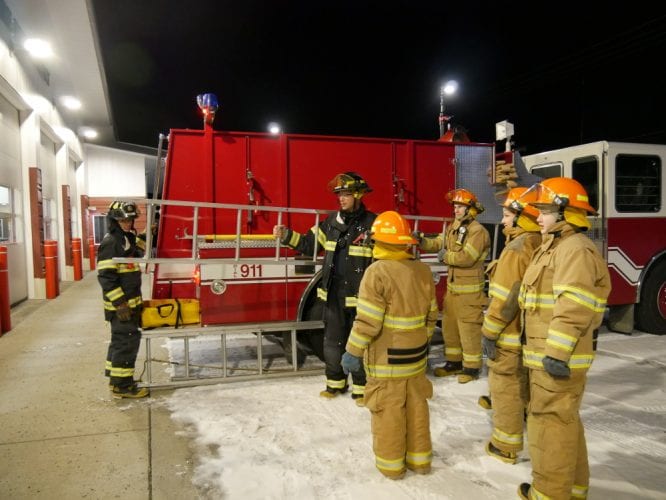 Some local teenagers have been spending one night a week this fall learning many of the skills needed to become a volunteer fire fighter. The junior fire fighters program is in its eighth year and has some youngsters thinking about joining the force when they’re older.

It’s a chilly night in November and five high schoolers and a handful of adults from the volunteer department have turned out for an evening training session at the Petersburg fire hall. PHS senior Austin Dow heard about the program during announcements at the high school.

“One day he was reading off the announcements and he said volunteer fire fighting department,” Dow said. “And I just thought it was pretty interesting. When I was in middle school and like elementary school I was like, I wanna be a fire figher. Now I kinda am.” Dow thinks he might be a volunteer when he’s older.

Sophomore Althea Malone said the whole experience has been a step out of her normal comfort zone but explains her father inspired her. “Well my dad is a fire fighter and when I was little I used to come watch his fire fighter drills when he was doing them and when I learned about this opportunity I thought hey maybe I can do that too.”

She said her favorite part of the training has been learning to use a self-contained breathing apparatus. “It was scary at first just kinda getting that used to there’s limited air around you but after a while it’s gotten a lot easier to feel comfortable with.”

Malone’s father Alan is teaching the class on ladders this particular evening. “They’re doing really good, really good,” he said. “I’m impressed with all of them. We’ve got some returning people and some first year people. They’re all doing great.”

Sessions started in October and have had as many as nine local teenagers this fall. The students learn all the skills that the local volunteers do – from tying knots to setting up ladders, using fire hydrants and breathing gear and breaking into a building during a fire.

After a little class time, Malone sends the students scrambling into the fire station bay to put on their fire-fighting gear as quickly as possible

With only two paid staffers the local fire, emergency medical and search and rescue squads depend on volunteers to respond to emergencies. The junior program started in 2009, just after Devren Bennett joined the force. He took over the in 2012 and says the training helps the students and the adult volunteers as well.

Students can’t join the department until they’re 18. Trainers hope they will consider joining when they’re older, or use the skills they learn elsewhere. Bennett said some former students have used their training after leaving Petersburg.

“We had one student go to the fire science program in Fairbanks and he is currently a firefighter in Juneau,” he said. “We’ve had a couple others go on to medical careers. And either way, whether they take this immediately on or maybe later on in life they decide to volunteer or something, this is an amazing skill set to have, something that I kinda feel like everybody should go through just to learn.”

After suiting up the students work on carrying ladders, setting them up, and learning to climb safely. They set one up into the second story of the fire engine bay and practice. The Monday night classes and training sessions will run into December. Later on the winter, they’ll shift to drills, practicing many of the skills needed to respond to a fire.