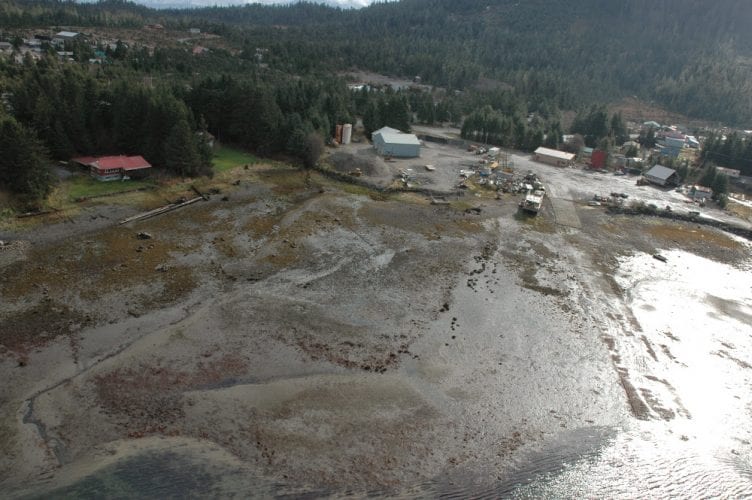 The Scow Bay turnaround with the existing boat ramp to the right. A proposed new ramp would be just to the right of that and against an existing rock jetty. (Photo from ShoreZone)

Petersburg’s borough assembly Tuesday voted against issuing a special use permit for a new boat ramp at the Scow Bay turnaround south of downtown Petersburg. However, the assembly was supportive of a lease for that ramp.

John Murgas owns the boat hauling and storage company Island Ventures and he wants to pay to build a new temporary crushed rock public use ramp just south of the existing ramp at the Scow Bay turnaround. He told the assembly that he wanted a special use permit for the ramp on borough tidelands.

“I think it fits the definition very well for a special use permit which is, let’s see it says ‘the city council shall issue the permit if the request is found to be of a beneficial nature to the community and that adjacent and surround properties will not be adversely impacted,'” Murgas read from borough code. “I just think that the boat ramp I’m talking about would be best as a public use facility.”

In the past two decades, the municipality has issued those permits mostly for driveway or utility connections on a public right of way. His application was submitted to the planning commission and that group sought direction from the assembly about whether a permit was the way to go instead of a lease of the property. Murgas, who already has a lease in Scow Bay for his business, did not think leasing was preferable for the ramp.

“To have it as a lease facility would preclude it from being a public use,” he explained. “The insurance requirements for a public use facility for a private facility may not even exist.”

Murgas has proposed spending an estimated $20,000 building a ramp 24 feet wide and 170 feet long, against the existing jetty. He would use it to haul boats during certain wind conditions and explained it would make that practice safer.

Petersburg’s attorney however, recommended the ramp be covered by a lease of tidelands, instead of a permit. And borough manager Steve Giesbrecht explained the past practice for the municipality. “Generally on waterfront properties and tidelands, the borough in past precedent we lease that property before, so that that money is, there’s a lease payment associated with that,” Giesbrecht explained. “That then comes to the borough and helps take care of off-setting the fact that it’s being taken care of in the private sector. So for example, Piston and Rudder leases property from us. ACE Electronics leases property from us.”

Some assembly members were concerned that other businesses with leases of borough waterfront property would be interested in a free special use permit instead. Borough officials also cautioned that a permit could be more permanent than a lease.

However, Kurt Wohlhueter supported the permit and was not worried about setting a precedent. “This sounds to me like a win-win,” Wohlhueter said. “You’re willing to put the money out to put the ramp in to make it safer so that more people can use. It won’t be exclusively yours now and we don’t assume any more liability than we already have so, I’m going to be voting for this.”

Some wondered if granting such a permit would impact the borough’s plans to develop a permanent ramp and vessel work yard in the same location. Voters last year approved spending money to design that project and the borough is applying for grant money to construct it.

“I certainly don’t wanna see something get in the way of developing that area,” said assembly member Jeff Meucci. “I appreciate what John wants to do and is doing and I hope we get a chance to help him out but I just wanna make sure we don’t get boxed in where we can’t develop that property out there because we have a special use permit that is excluding us from working out there.”