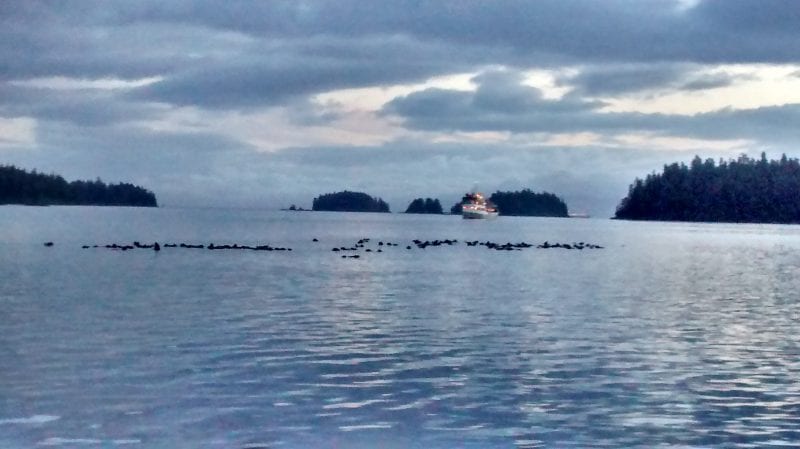 Sea otters raft up in the inside waters of Southeast Alaska in June 2014. (Photo courtesy of Matt Lichtenstein)

Crabbers and dive fishermen returned to Alaska’s Board of Fish this month seeking changes to commercial fishing regulations in Southeast Alaska for crab and other shellfish impacted by a growing population of sea otters in the region. Some told the board that time is running out on their fisheries because otters are eating clams, sea cucumbers, urchins and Dungeness crab.

For the past decade the board has heard sea otter concerns from crabbers and divers as it meets on Southeast regulation changes every three years. This year was no different as industry representatives sought to reverse declines in fishing areas or seasons.

Wrangell crabber Mike Lockabey told the board the commercial Dungeness crab fleet is being compressed because of the otter predation problem.

“It is acute,” Lockabey said. “It will not make the next board cycle without losing fisheries. Not just area, fisheries.”

Crabbers sought relief from the state Board though, asking for fixed season lengths, without the possibility for reduced fishing time like 2017 saw.
Lockabey, who was representing a coalition of Wrangell crabbers on a Dungeness management change, also wanted the board to bring the issue to the federal government. He told the board he’s written to president Trump and interior secretary Zinke.

“The reason I wrote them is ‘cause I’ve been encouraged by their actions in the North Pacific marine conservation zones, they’ve opened five up by executive order. I’m also encouraged by the actions they took in Utah, opening up parks and monuments to fishing and hunting and commercial hunting, guiding if you will. They’re acting to reduce these regulations and right wrongs. What’s happened with this is wrong. Nobody in my coalition wants to see the eradication of otters. We want to see a balance.”

Lockabey wants active management of otters, like the state does with other predators like wolves. Otters once nearly hunted to extinction are protected under federal law. Only coastal Alaska Natives allowed to hunt them, and there are strict guidelines for use of their pelts. Petersburg officials are still hoping to see changes to that law and plan to lobby in the nation’s capital this winter with the hopes of making it easier for Natives harvest and sell unmodified pelts.

Dive fishermen in the region continued to seek help with the problem from the board of Fish as well. Phil Doherty, executive director of the Ketchikan-based Southeast Alaska Regional Dive Fisheries Association said several of his organization’s proposals were prompted by loss of area from otter predation.

Doherty explained that otters were wiping out those prey species in parts of the region.

After they were essentially wiped out of Southeast by fur traders, the state reintroduced around 400 otters to the region in the 1960s. A 2012 estimate put their numbers at 25,000 and in some parts of the region otter numbers are growing by as high as 12 percent a year.

Kyle Hebert, the Alaska Department of Fish and Game’s dive fisheries research supervisor for the region, said fewer parts of Southeast are open and he noted declines on the outer coast of southern Southeast.

“Although geoduck and sea cucumber areas are still open in this area, the populations are steadily declining and with each survey that we conduct we expect commercial harvest opportunity to drop.,” Hebert told the board.

He called otters the greatest threat to the future of the dive fisheries. Hebert also answered questions from the board on the topic. He told them he thought the waters of Southeast have not reached carrying capacity.

“While the sea otters were nearly exterminated I think those shellfish fisheries had a chance to flourish in the absence of perhaps their top predator,” Hebert said. “And then when the sea otters were reintroduced, they’re introduced with a few hundred otters, but it took time for them to increase and now like an exponential situation as rapidly as we’re higher and higher, that’s the situation there.”

Meanwhile, board member John Jensen told of the animals becoming a more regular sight around his home town of Petersburg. But board member Orville Huntington of Huslia wanted to let nature take its course.

“They’re gonna limit their self at some point,” Huntington said. “Traditional harvest of sea otters probably was a bit more, a bit better back when sea otters were there along time ago so. I just don’t wanna spend a lot money in the industry that’s probably in trouble. I think nature will take care of itself at some point.”

The board is deciding over 150 proposals for both shellfish and finfish management changes during a nearly two-week meeting in Sitka.