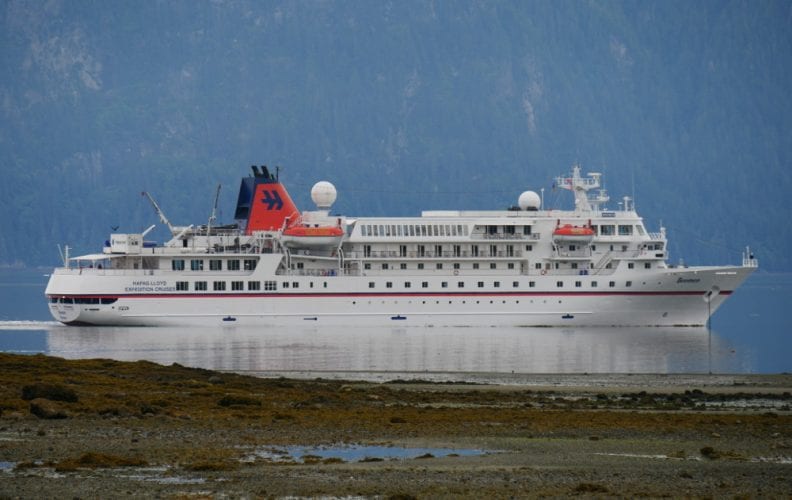 Petersburg is close to passing a new fee for passengers on cruise ships visiting the borough. It’s based on a similar charge for cruise passengers in Juneau, which has prompted a lawsuit from the industry. Some of the cruise companies that stop in Petersburg are not opposed to the idea but would like to see changes.

As drafted, the new ordinance would have the borough billing cruise companies based on their passenger manifest, each time a ship docks in Petersburg’s harbors. The new fee would be five dollars per passenger per visit. It won’t be charged to ships with fewer than 20 passengers or those without overnight accommodations.

During the second reading of an ordinance to create the new fee, the assembly agreed to change the name of it. It will now be called a marine infrastructure fee, instead of a marine passenger fee. Assembly member Eric Castro suggested the change after hearing from local residents.

“I know it’s just a name but sometime semantics makes a difference and perhaps the industry would prefer infrastructure fee instead of fee assessed for each of their passengers,” Castro said.

The name change wasn’t popular with the borough’s finance director Jody Tow. “I know Juneau uses a lot of their marine passenger fee money to beef up their police department in the summers when they get so many people and use it for their fire department and their ambulance services and their hospital,” Tow said. “You know we need to be careful about the wording. I do agree that marine passenger fee is not probably the best title but I’m not sure infrastructure is either but I really don’t like marine infrastructure.”

Nevertheless, that change passed on a 4-3 with Kurt Wohlhueter, Mark Jensen and Jeff Meucci voting against the amendment. Castro also suggested charging the fee based on the length of a vessel instead of the number of passengers but the assembly didn’t vote on that change. Assembly members want to use money from the fee for infrastructure projects that help cruise boats or their passengers.

The ordinance passed in second reading with Jensen and Wohlhueter voting no. As drafted it would take effect in January of 2019.

A similar fee in Juneau has prompted a lawsuit from the cruise industry which is contesting how the money is spent along with the constitutionality of a tax on shipping. KTOO radio reports the case is headed to trial and Juneau has spent more than 600-thousand dollars to defend the lawsuit.

Whatever it’s called at the local level, industry representatives still call it a head tax. Among the companies that bring ships to Petersburg there is not opposition to the new fee but there are some concerns.

UnCruise Adventures CEO Dan Blanchard has three issues. “One the timing,” Blanchard said, “two are the funds actually dedicated to the general fund or are they actually going to the need, and then I think lastly is making sure you don’t discriminate against boats that might wanna come there and make Petersburg their home, which brings a lot more income to the community. You don’t necessarily wanna discourage that. We’ve seen that in some ports that have later gone around and changed the ruling.”

As far as timing, Blanchard said his company has had 2019 prices out for about a year already and can’t absorb the additional 5 dollar a head fee. He says they coming out this winter with prices for 2020 and will factor in the proposed Petersburg fee.

He also said UnCruise plans to base a boat in Petersburg, with passengers spending more money in lodging and restaurants and shops and thinks that should not be discouraged. “Juneau typically doesn’t discourage boats that are based out of Juneau, in other words they want the hotel revenue and the taxes that brings,” Blanchard said. “They want the fuel purchased there, they want the food purchased there, they want the boats repaired, so they don’t penalize companies that choose to make Juneau their home by adding a head fee to each passenger. However, what they do do which I think is totally legitimate is they, any vessels that are stopping by for a port call they certainly charge the $5 fee for and I would suggest Petersburg look at that as well.”

UnCruise is basing its ship the Safari Quest this year and next year in Petersburg. UnCruise offers high end cruises on smaller ships to Alaska and other destinations.

Another company, Lindblad Expeditions also has cruise stops in Petersburg on several National Geographic boats. In an email from the company, Lindblad’s chief expedition officer Trey Byus wrote “We support a fee that is fair, reasonable and allows time for us to budget. While we have already priced 2019, a $5/head fee would not prevent us from visiting Petersburg.

Another company, Alaska Dream Cruises did not respond to requests for comment on the fee.

As drafted, the fee will only be charged to boats docking in Petersburg harbors. Other ships that bring passengers ashore in Kupreanof, Thomas Bay or other parts of the borough but don’t dock in the harbors wouldn’t be charged. The money would be put in a special revenue fund with the assembly deciding on how to spend it each year. But the ordinance spells out the types of projects or programs that the money should be used for. Because a limited number of passengers stop in Petersburg each summer on smaller vessels, it’s only expected to generate at most about 35,000 dollars a year for the borough.

The new fee needs one more approval by the assembly before it takes effect next year.