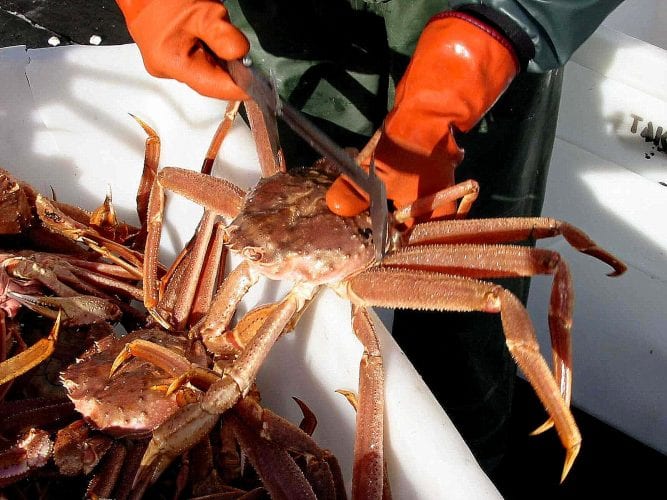 Tanner crab get measured by Alaska Department of Fish and Game staff. (Photo courtesy of ADFG)

The upcoming commercial Tanner crab fishery in Southeast could bring another high harvest while the Golden King crab fishery will likely be slow again. Both fisheries open Saturday, February 10.

Biologists with the Alaska Department of Fish and Game have been tracking tanner crab in Southeast since the late 1990s. This year’s survey numbers look better than ever. Managers estimate about 6.64 million pounds of mature male Tanner crab this season, which is what the fishery targets. That’s a 35 percent increase over last year’s estimate.

“That’s the largest biomass estimate we’ve seen in the tanner crab surveys,” said Joe Stratman, the lead crab biologist for the Alaska Department of Fish and Game in Southeast. “Things do, at least by our survey, look pretty good for tanner this year.”

He says they saw improved survey numbers in many of the survey areas.

Last year’s fishery brought in almost a million pounds by 73 permit holders. The fishery was valued at $2.68 million with an average price of $2.70 per pound. The recent ten year average harvest for Southeast Tanner is 1.03 million pounds. 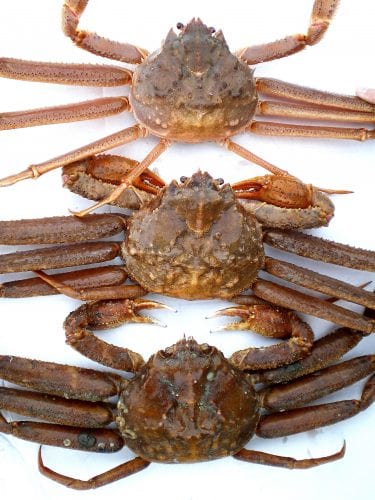 Tanner crab at different stages of their life. (Photo courtesy of ADFG)

Most of the fishermen use baited pots, which is a limited entry fishery and allows 80 pots per boat. But about 20 fishermen are registered to use ring nets, which is the only open access fishery for crab in Southeast. Fishermen are limited to 20 rings or what are called hoops.

“It’s a circular frame with kind of a mesh suspended from it. So the rings basically just lay on the bottom,” Stratman said. “They don’t retain crab like a pot would so there fairly inefficient type of gear but they’re baited and if the ring is brought up properly they’re able to stay in that ring net and be retained.”

Southeast Tanner harvests in recent years have been strong. The commercial fishery is considered a stable one with surveys showing consistent growth in the population.

That’s different than the Golden King crab fishery, which is not abundant in Southeast. This year, managers are seeking a maximum harvest of just 70,000 pounds, which is the smallest harvest goal in the last couple of decades.

Harvests for the crab have fluctuated widely since the 1970s reaching peak levels in the 80s followed by a collapse in the early 90s. Stratman says the fishery has been on a steady decline the past seven years and managers are lowering guideline harvest levels accordingly.

“The intent of the reductions is to stop and reverse the decreasing trend in commercial fishery catch rates and also to prevent damage to the long term reproductive potential of the stocks,” Stratman said.

The state manages the Golden King fishery in seven areas. Most of those areas will see reduced harvests. One area, including Frederick Sound near Petersburg, will be closed completely.

“So, sort of in a nutshell the closure of the East Central management area and GHL reductions mid Chatham, Northern, Lower Chatham and Icy Straight management areas are based on poor and in some cases very poor fishery performance,” Stratman said.

The Golden King crab fishery is a particularly hard one to manage. There’s little known about the species because there are no surveys done. Managers rely on harvest data and port samples during the fishery. Biologists do know that Golden King don’t reproduce on an annual cycle like other crab. It’s more like every 20 months. Commercial crabbing coincides with the Tanner fishery not according to the crab’s life cycle.

Permit holders can register to fish up until the start so managers are not planning on announcing the exact season length until Saturday morning before the noon start. But historically, the tanner fisheries have been about a week long for core areas and additional days are usually called in the non-core areas. Announcements will be made in press releases and aired on NOAA weather radio and on VHF channel 16.