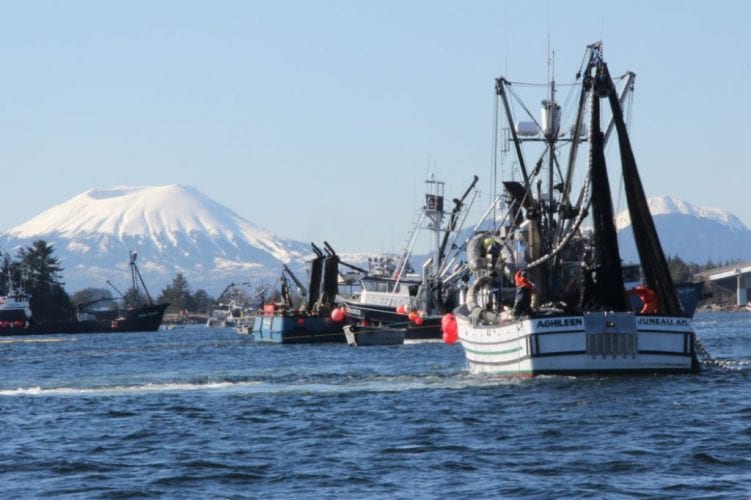 Despite three days of impassioned testimony before the Board of Fisheries in January, not much has changed for the Sitka Sound sac roe herring fishery, which will ramp up in about a month. Local subsistence harvesters won an increase in the size of their exclusive use area, but failed to persuade the board to reduce the commercial catch. Fishermen and processors from Petersburg joined with other commercial interests to remind the board of the economic importance of the annual springtime export.

Commercial fishing representatives at January’s meeting testified in oral and written comments about the economic importance of the annual fishery in Sitka Sound. Icicle Seafoods processes some of the catch at its Petersburg plant and the company’s John Woodruff talked about the impact to the Petersburg economy.

“Last year we spent roughly 450,000 dollars just on Sitka herring labor,” Woodruff said. “That’s our plant folks and our engineers, not the office crew, not the grounds crew here etc., but $450,000 dollars. Most of this stays in Petersburg and it comes at a time when there’s not much other economic activity in town and a half million bucks might not seem like much but at that time of year for a town like Petersburg, I think it’s impactive.” Woodruff said the work was important to other businesses in town as well.

In written comments, the Petersburg Chamber of Commerce noted that Icicle employs about 75 people for that processing while there are seven permit holders homeporting boats in Petersburg along with 15 local tender boats taking part in the commercial fishery. The chamber letter called that fishery important to the community as a whole.

The sac roe seine catch is worth millions of dollars to the commercial fleet every year.

Angela Christensen said she packed herring from Sitka to Petersburg with her family every spring. She said there was no biological basis to reduce the harvest rate and defended management by the Alaska Department of Fish and Game.

“The department’s long history of stock assessment and the care and consideration they put into their conservative guideline harvest level is reflected in the returning biomass each year,” Christensen said. “The Sitka herring fishery is a sustainable herring fishery for all, subsistence and commercial.”

Petersburg’s Julianne Curry has crewed in the commercial fishery, and now holds a permit. “In the decade that I’ve been participating in the fishery I’ve heard arguments to close or curtail the commercial fishery shift every three years,” Curry said. “Every board cycle a different set of talking points are focused on with the goal of discrediting the department and reducing or eliminating commercial herring harvest. I urge you to look past the rhetoric and focus on the data.”

The Alaska Department of Fish and Game reported that herring populations have been stable, increased and decreased under the current commercial harvest rate. ADFG statewide fisheries scientist Sherri Dressel noted opposing patterns for herring stocks in Alaska and British Columbia.

“When Alaska was low in the 70s, British Columbia was high,” Dressel said. “When Alaska peaked in around 2010, British Columbia was at its lowest and now as British Columbia is starting to increase Alaska is starting to go down, suggesting that there are large scale environmental influences that are affecting these populations because we’re seeing similar trends regardless of what harvest rate has been applied. What this suggests to me is that large scale environmental influences are having an impact.”

The sac roe fishery in Sitka Sound along with a spawn on kelp fishery in Craig and a winter bait fishery in Craig were the only commercial fishing opened for herring in the region last year. Other stocks were too low for managers to open fisheries.

Subsistence harvesters in Sitka Sound share their herring eggs with other communities around the region and they lobbied the board to reduce the commercial catch. Harvey Kitka is chairman of the Sitka Tribe herring committee.

“We wanted these proposals to come forth and hopefully that you guys will see that the needs for conservation is very important,” Kitka said.

Subsistence harvesters reported a tougher time getting the herring eggs they needed in Sitka Sound. Jeff Feldpausch, resource protection department director for the Sitka Tribe of Alaska, said the tribe and the state’s Division of Subsistence started surveying its members in 2002.

The Board was considering competing proposals. Some sought to reduce the commercial harvest rate in the region or Sitka Sound specifically. Others sought to close more area to the commercial fleet. The Southeast Herring Conservation Alliance, a commercial industry group, had proposals in to reduce the herring spawn needed for subsistence and repeal closed commercial areas but ended up withdrawing those.

The board was somewhat split over the herring proposals. Orville Huntington of Huslia had conservation concerns.

“I’ve seen conservation plans fail time after time,” Huntington said. “We’re in a rock and a hard place with king salmon right now and I think this one is going to end up the same way. It’s like that last stronghold we’re hanging onto and if we let this herring fishery go, it’s just gonna keep going.”

But others, like Fritz Johnson of Dillingham thought the management was working. “The stocks do fluctuate somewhat based on a number of factors but this is the same exploitation rate that’s been used in the Togiak sac roe fishery and it seems to work,” Johnson said. “I realize there are a lot of factors at play here but given all the stakeholders that are dependent on this fishery, I’d be reluctant to take this radical a change at this point as these proposals suggest.”

Reed Morisky of Fairbanks and Huntington were the only votes in support of reducing the commercial harvest rates.