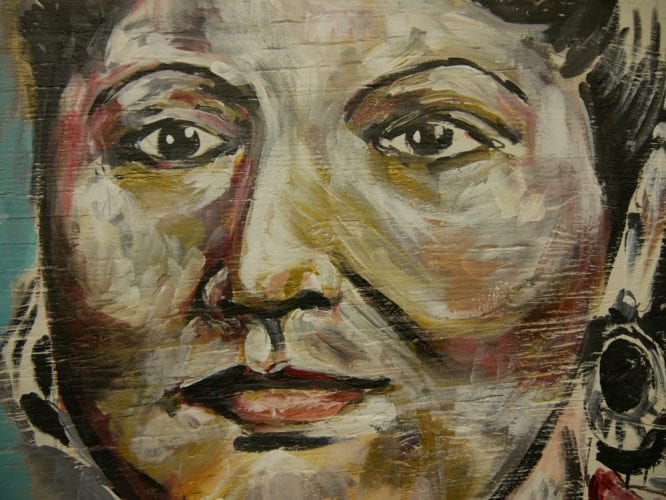 A portion of the portrait of Elizabeth Peratrovich painted by Janine Gibbons. (Joe Viechnicki/KFSK)

Today, February 16th, is Elizabeth Peratrovich Day, celebrating the Native civil rights leader born in Petersburg. She’ll be honored with a parade this afternoon and the unveiling of a new portrait. There’s also an effort underway for a new mural that’s planned for the courthouse building. The artist for both works is Petersburg resident Janine Gibbons. She and another local resident, Malena Marvin, are part of a new local group called the Petersburg Mural Society. They are fund raising for a new mural that could feature Peratrovich and another leader of the civil rights movement from here, Amy Hallingstad. Joe Viechnicki spoke with Gibbons about the portrait and plans for the mural.

Gibbons hopes the mural can go up this summer, in between her other projects, including one new book for the Baby Raven Reads program and a photography trip to Haiti she’s planning. Today’s Peratrovich parade is at 1 p.m. The portrait will be unveiled this afternoon at the ANB Hall, now called the John Hanson Sr center, during a celebration from 4-6 p.m. There’s also an open house Saturday, February 17 at the public library from 4-6 p.m. for people to learn about the mural project and give their input.