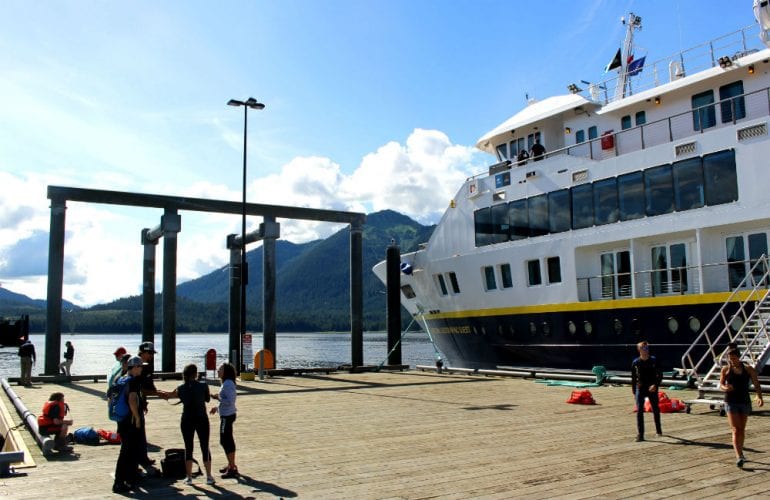 The National Geographic ship Quest tied up to Petersburg’s drive down dock in the summer of 2017. (Nora Saks/KFSK)

Petersburg will start charging a $5 a head fee for passengers on cruise ships in 2019. Petersburg’s borough assembly Monday gave final approval to the new charge, despite a lawsuit over a similar fee in Juneau and concerns from the cruise ship industry.

Among Southeast communities, Petersburg will join Juneau and Ketchikan in charging a local fee on passengers, sometimes called a head tax. Petersburg’s assembly has gone back and forth over what to call it because of concerns that the industry has sued Juneau over use of head tax money. This month they agreed to change the name back to a marine passenger fee, instead of an infrastructure fee. Eric Castro agreed to reverse course from the name change he suggested at the last meeting.

“After we received a letter from our attorney, she made a good point mentioning how the term infrastructure only refers to physical structures and that we shouldn’t probably limit the way we can spend money on so severely,” Castro said. “So for example we might be able to be able to use the marine passenger fee to be able to fund training of personnel, an activities director, any type of part time position and many things that aren’t a physical building.”

Cruise companies that stop in Petersburg, haven’t opposed the fee but have asked for changes.

Rick Erickson of the Cruise Line Agencies of Alaska wrote to the borough asking to table the ordinance and come up with a more narrowly focused fee for infrastructure that would aid cruise ships. “The broad nature of the proposed ordinance to allow for funding of services to passengers and not just vessels is at the heart of the legal debate between Cruise Lines International Association of Alaska and the City and Borough of Juneau,” Erickson wrote.

Other companies have asked for a delay in implementation, because they’ve already priced their cruises for the next two years, or ways to encourage ships to start and end their trips here.

Assembly member Jeff Meucci proposed an amendment clarifying that ships starting and ending a cruise in Petersburg will only be charged once.

Kurt Wohlhueter wanted to consider an exemption for boats homeported here. “We’re in a unique position right now where we could be the only community in Southeast that doesn’t charge a head tax for anybody who wants to homeport out of Petersburg and I think that’s something that we need to consider,” Wohlhueter said. “Because they’re gonna to bring that money in here, they’re gonna spend the night here, their ships are going to be moored here, we’re gonna make more money on those people then those that just do touch and gos. So instead of passing this amendment, you know we should consider, if they want to homeport here, not to charge them any head tax at all and then let main street benefit from the added income that they’re gonna spend here.”

Nevertheless, Meucci’s amendment passed with only Wohlhueter voting no.

Only smaller to mid-size ships stop in Petersburg, which doesn’t have a deep water port to accommodate the larger vessels. Because of that, the community only sees a few thousand passengers a year. At best, the new fee is expected to raise about 30,000 dollars a year, not the millions paid to larger communities in Southeast. Assembly member Jeigh Stanton Gregor thought it would still pay for important improvements.

“That could be great money to invest let’s say new bathrooms, more subtle infrastructure over time that could also contribute to a ship wanting to homeport here, being able to invest that back into our infrastructure for that,” Stanton Gregor said. “I know it’s not a ton of money but, we’re so limited in exactly what we can use it for it’d be a good asset for the cruise industry as well.”

Use of the money will be determined by the assembly during the annual budget process, but the ordinance also includes a broad list of the types of expenditures it can go toward. Those include capital improvements for ships or their passengers, land or building purchases to help the industry, along with passenger surveys, along with personnel and equipment needed as a result of cruise ship visits.

Mayor Mark Jensen didn’t want a lawsuit over Petersburg’s fee. “I just am concerned about not generating enough money, I know it would add up but I’m just worried about any kind of litigation towards the city, so I will be voting no on this,” Jensen said.

Jensen and Wohlhueter were the only no votes and the amended fee passed on a 5-2 vote in third and final reading. It takes effect in January of 2019 and will be based on passenger manifests of ships docking in Petersburg’s harbors. It also exempts ships with 20 or fewer passengers.