King salmon sport fishing shut down on Southeast’s inside waters 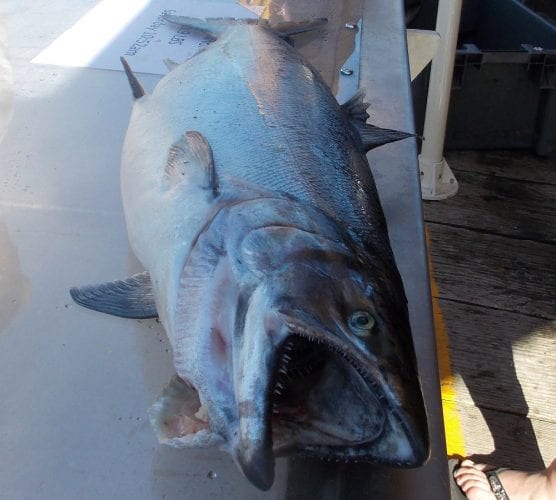 A king salmon is weighed in at Petersburg’s Memorial Day weekend salmon derby in 2015. The 2018 derby has been cancelled. (Joe Viechnicki/KFSK)

The Alaska Department of Fish and Game is shutting down sport fishing for king salmon this weekend on most of the inside waters of Southeast Alaska due to conservation concerns. Anglers can’t keep king salmon in many parts of the region, except the outer coast, starting April 1st.

In Petersburg area, the closure impacts not just district 8, the waters around the mouth of the Stikine River. Also closed are districts 6 south of Mitkof Island and 10 north of Petersburg along with other areas of the inside waters stretching from Ketchikan to Skagway. The district 8 closure runs through mid-July. Other areas are closed to king retention for April, May and half of June.

Fish and Game does still expect to open some king fishing June 1st in this area, for hatchery Chinook returning to Blind Slough and City Creek.

The measures are meant to conserve non-hatchery, wild kings returning to spawn in rivers in Southeast Alaska and British Columbia. The waterways have seen historically low runs in recent years and are not expected to meet Fish and Game’s goals for spawning fish. Three rivers, the Unuk near Ketchikan, King Salmon in Seymour Canal and Chilkat River near Haines are listed as stocks of concern for continuing low returns. But Fish and Game says the wider restrictions are needed to protect to fish returning to the other rivers in Southeast, like the Stikine near Wrangell and Taku near Juneau.

The department has even closed a portion of Behm Canal north of Ketchikan to all salmon fishing year-round. And the department says fishery managers in Canada are considering similar restrictions for sport and commercial fishing.

Southeast’s commercial winter troll fishery closed March 15 and a limited spring season is expected only around hatchery sites and on the outer coast.