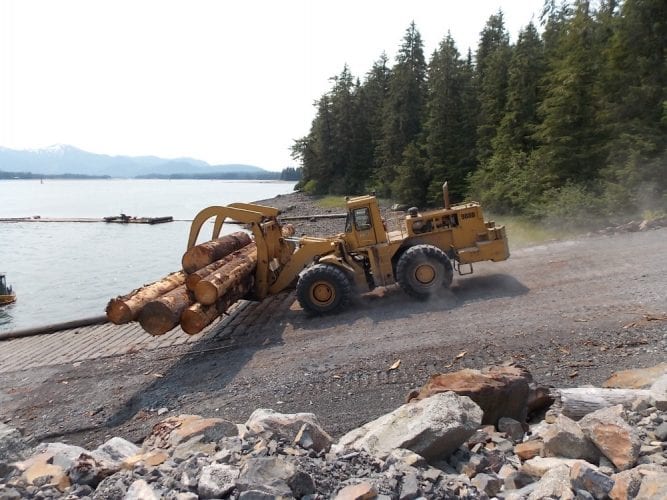 Logs are brought to the Tonka log transfer facility on Kupreanof Island 10 miles south of Petersburg in the summer of 2013. (Joe Viechnicki/KFSK)

An environmental advocacy organization says the U.S. Forest Service doesn’t appear to be taking steps to correct costly problems in Tongass timber contracts. Public Employees for Environmental Responsibility says the federal agency has released thousands of pages in response to its Freedom of Information Act lawsuits. But those documents don’t describe any significant changes.

Last year, PEER published a review of two Tongass timber sales done by Washington office staff of the Forest Service in 2016. That document listed problems with appraisal and oversight of the Big Thorne timber sale on Prince of Wales Island and the Tonka sale on Kupreanof Island near Petersburg. PEER asked for other agency records and then filed lawsuits when it said the federal agency did not respond to those requests.

Staff Counsel Adam Carlesco has been litigating the two lawsuits. He said one seeks background information and documentation on the appraisals for the sales and how the agency made decisions on valuing timber.

“We saw that high-profit trees like Sitka spruce were removed, whereas the subsidized ones that were supposed to be removed, namely hemlock, were left within the forest by the harvester, against the forest plan prescription and whatnot,” Carlesco said. “So we wanted to get documentation as to how this sort of thing happened.”

A second suit seeks information about what changes have been made to address problems found in the 2016 Washington office review. Carlesco said the Forest Service has been responsive to PEER’s lawsuits and has released thousands of pages of documents.

“In terms of producing material, yes, we’re getting material, it’s coming to us,” he said. “In terms of getting the answers that we’re looking for, we haven’t exactly seen the material there that would show us specifically what’s been done, what amendments have been made to make sure these sorts of things don’t come again and we’re not seeing the level of accountability that we were hoping for in this production.”

The 2016 agency review found the way the sales are appraised and has cost the agency revenue. The review stated, “If the hemlock saw timber volume is not being removed, then sale value based on what is actually occurring on-the-ground has been under-represented.” On one of the sales it noted that difference exceeded $1.7 million. In also stated, “Given the low-value to non-existent market for this material, the results from appraising this material will often (and maybe always) result in a deficit sale.”

The review recommended an independent evaluation of Big Thorne to follow up the issues identified with sale preparation and administration.

PEER is hoping the documents produced in the two lawsuits will be enough to convince the U.S. Agriculture Department’s inspector general to audit Tongass timber sales. The Forest Service is part of that department.

PEER asked for such an audit but was denied last year. Carlesco explained PEER wants to make sure the problems are not being repeated in new timber sales.

“There really is not clear evidence that there have been programs to prevent this sort of thing,” Carlesco said. “In actuality, we’ve been looking at documentations from contracts that have gone into place since this review has come in and we’re seeing some of the errors that were highlighted within this Washington office review be repeated. So we’re not really entirely sure specifically what the Tongass office is doing to ensure this sort of thing does not happen in the future.”

Citing the ongoing litigation, a spokesman for the Tongass National Forest Service on the Tongass declined to answer questions on the lawsuits, the timber sale review and steps taken to fix appraisal problems. In court filings, the U.S. attorney’s office denies violating the federal law for release of the records. Government attorneys also deny how PEER is characterizing the Washington office review of the timber sales.

Last year, the agency responded to PEER’s release of documents saying the Forest Service prepared an action plan to address the review’s findings and was implementing that plan. The Forest Service said it had updated the appraisal process and administration of timber sales.

Earl Stewart, Tongass forest supervisor, was asked about the Washington office review at a March 7 meeting on the Central Tongass Landscape Level Analysis in Petersburg.

“A lot of this is still going on so there’s really not an absolute answer on different components of it,” Stewart said. “That’s why I say it’s a really long conversation, because now there is a whole national forest products modernization effort that’s going on that are just having sub-teams identified now. So literally you’re talking about a year and half to two years of ongoing effort.”

Both timber sales were Integrated Resources Timber Contracts, with the proceeds kept on the Tongass and used to pay for stewardship work such as replacing culverts or repairing hiking trails. 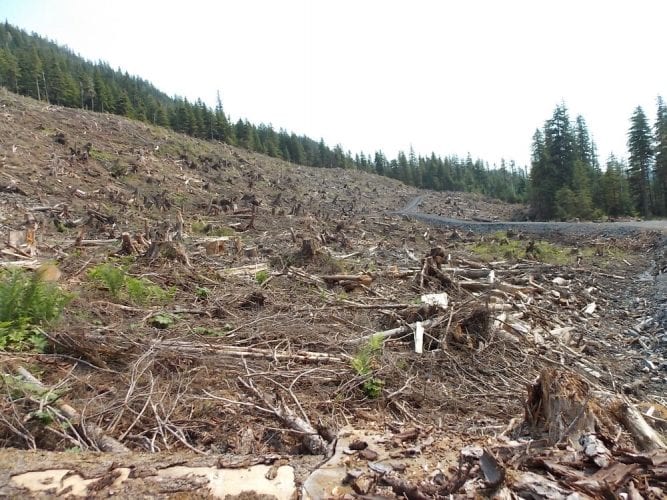