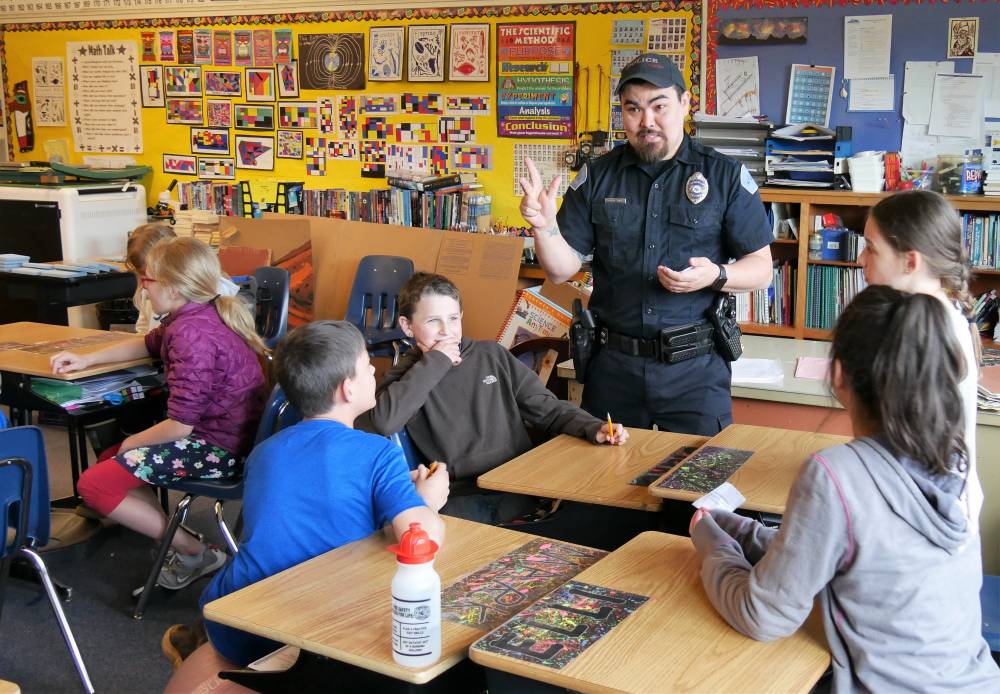 Petersburg police officer, Jared Popp, has been named DARE coordinator for Alaska. He’ll be the liaison between Alaska and the lower 48 police departments participating in the program. KFSK’s Angela Denning stopped by one of his recent DARE lessons at the grade school and has this report:


About 20 fifth graders are finishing up a snack at their desks and getting ready for their DARE lesson of the week. It’s the last lesson in the 10 week program taught by local police officer, Jared Popp.

Popp brings their attention to the front of the classroom. The students get out their DARE work books and flip to the back. They take turns talking about times when they needed some help: doing math, studying for tests, folding laundry, washing dishes.

DARE stands for Drug Abuse Resistance Education. The acronym has been around for decades. It used to be targeted at getting kids to just say NO to drugs. The program would teach kids a lot about the bad side effects of taking different drugs. But in recent years the curriculum changed. It’s now called, “Keeping it Real”, and it’s a lot more broad based. Now, Popp says, it focuses on staying healthy, making good choices, and being responsible.

“We’re teaching [them] the tools to use to make good decisions,” Popp said.

In Petersburg the program is geared towards fifth graders because next year, they’ll be moving on to the junior high school.

“Hopefully, that will give them the tools to make good decisions when they go into middle school and high school when temptations are more prevalent, I would say,” Popp said. 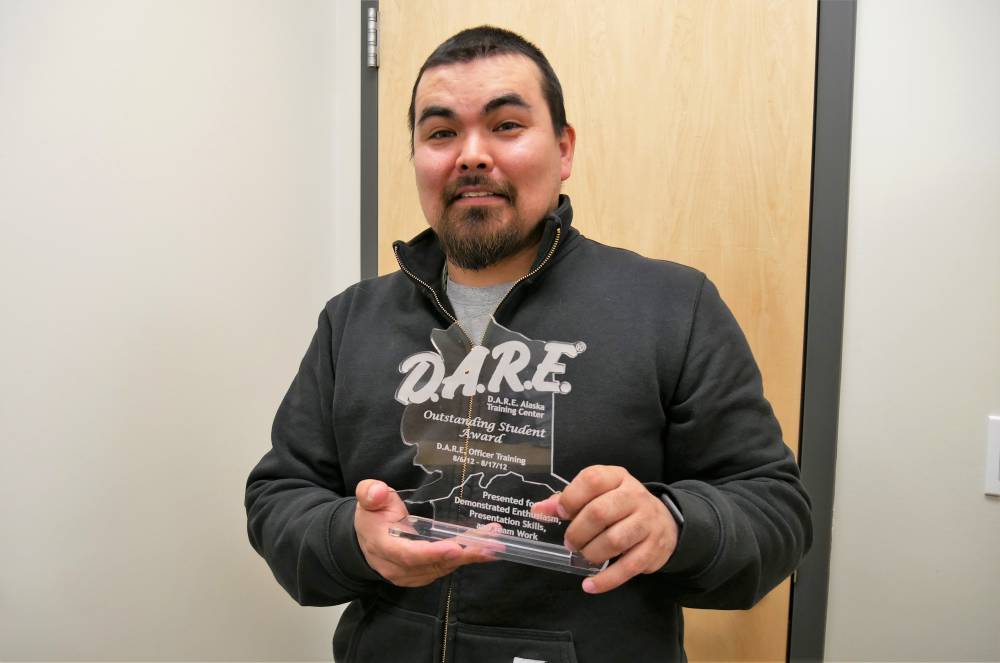 Officer, Jared Popp, holds an award he received for being an exceptional student in his DARE training. He has been named the DARE coordinator for Alaska. (Photo by Angela Denning/KFSK)

Popp has been a police officer in Petersburg for almost 11 years. He says he has always been interested in teaching the DARE program. When the former DARE officer retired, Popp jumped on the opportunity to take it over. He remembers DARE from when he was a kid in Fairbanks.

“I took DARE when I was in 6th grade by an officer named Officer James,” Popp said. “For some reason, he stuck with me, he was always there. Whenever I would see him in the town, I’d always wave at him; he probably didn’t know who I was. I always wanted to become a police officer…when I finally became one, it was, ‘You know what? I want to be a DARE officer now.’”

So, what has Popp learned from the teaching experience?

“I guess I’m surprised that the kids are smart…like REALLY smart,” Popp said. “My favorite part of the DARE lesson is at the graduation when the kids read their DARE essays. When I was a kid I was kind of all over the place and I kind of feel like some kids kind of seem like they’re all over the place and maybe not really paying attention but when they read their DARE essays I can see that they’re really picking it up and that they really understand the tools and that they do absorb all this information really well.”

Popp’s new job as the statewide DARE coordinator won’t affect his duty as a local police officer. He won’t be getting a raise either. He’s just doing it because he wants to and the borough police department supports it.

He’ll be providing support for other DARE officers around the state helping them get the materials that they need. And hopefully, bring some new communities on board to the program’s updated curriculum.