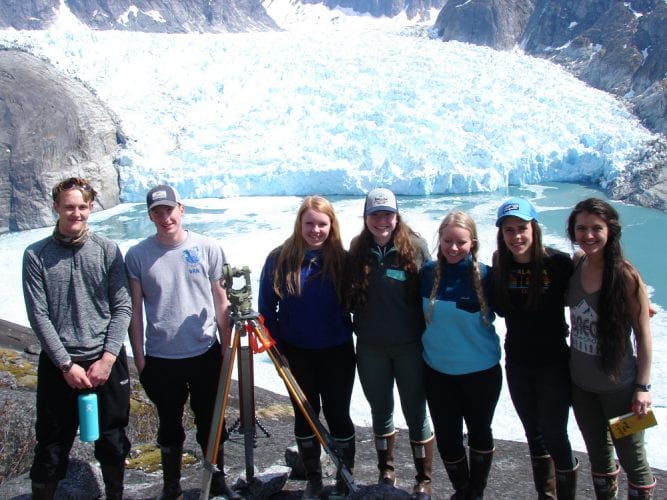 A team of students from Petersburg High School Thursday finished up their latest calculations on the position of the LeConte Glacier near Petersburg. The annual survey has been recording the retreat of the ice mass since 1983. This year students witnessed massive ice blocks breaking off the face a documented a small retreat of the southernmost tidewater glacier in the northern hemisphere.

Seven students and two teachers helicoptered out to two positions on the steep wall of the rocky fjord. There survey markers are fixed in the rock, one on the north side and one on the south side. And, like they’ve been doing since teacher Paul Bowen started the program 35 years ago, the students use survey equipment to record angles to different spots on the ice. A couple days later, they’re back in the classroom going reviewing the math needed to calculate the position of those points.

One of the biggest problems the students have is those points sighted on the glacier are constantly changing. Giant blocks of ice the size of city buildings fall off the face of the glacier into the water of LeConte Bay, in a process called “calving.”

Teacher Victor Trautman explained the ice was doing a lot of that during the team’s visit.

“It surprised me because usually in the spring when we’re there, it’s pretty benign,” Trautman said. “But we basically saw at least half of that face go away over the period of time we were there.”

Trautman explained the students worked smoothly to take their sightings despite this dynamic situation. “They had just finished collecting all their data from one side and a third of it calved off. So they just sat down and reshot another six more points, just so that we’d have the data, without being told, oh you need to do that. No they knew they needed to do that.”

Senior Helen Martin made the trip for her second year and witnessed the big pieces of ice falling into the bay. “They kind of compared it to a 20-story building falling off the face of the glacier and then of course that made a lot of different waves but it was really cool because once all the like glacial debris was in the water we could really see which way the current was taking it because it was like a total divide between ice and then just glacial waters,” Martin said.

Another senior Josh Thynes was on his first trip to survey LeConte. “You can drive a skiff into that area but there’s nothing really comparable than actually being there up on the rocks, up on the cliffs,” Thynes said. “You can’t really get that view anywhere else.” Thynes called it a once-in-a-lifetime chance and thinks more students should apply to make the trip.

The older students work with juniors and sophomores who will be making the trip in future years.

Sophomore Maria Pfundt is learning the math and waiting her turn to do the survey in the next two years. “I like that we’re like all together like trying to figure out together so that if we have questions we can ask our peers which is nice,” Pfundt said.

Next to her, senior Julia Murph calculates another point on the ice. She was making her first survey trip and she described the vast scale of the glacier and the ice falling from the face.

“The sound from the glacier when it calved was disconnected because it was so far away from actually watching it,” Murph said. “So you kind of got to a point where you’d hear it and you’d be like well it’s pointless to look ‘cause like it’s already fallen. But sometimes it’d go for long enough where you’d hear the sound and you’d turn and look and there’d be more falling after that so that was really interesting.”

“We’re a mile away and it was hard for me to understand that just because all of your reference points are huge,” Murph continued. “There’s huge mountains and a very large glacier and I couldn’t tell how far it was away. It didn’t seem that far.”

This year’s trip to LeConte and the students’ work to study it were documented by a photographer working on a project through an early career grant program with National Geographic. Ian Strachan is capturing still photos and videos.

“I’m trying to do a storytelling project where I’m describing glaciers in general, kind of the basic geology at work as well as their level of retreat, or rate of retreat and especially how LeConte is factoring into that,” Strachan said.

Strachan planned to return later in May for more recording and photographing of the ice in LeConte Bay. He expects the community will be able to see his work sometime later this year.

So after all the number crunching, the bottom line is the ice retreated about 300 feet from its position a year ago. It’s been relatively stable but scientists expect to see a more dramatic change in the future.