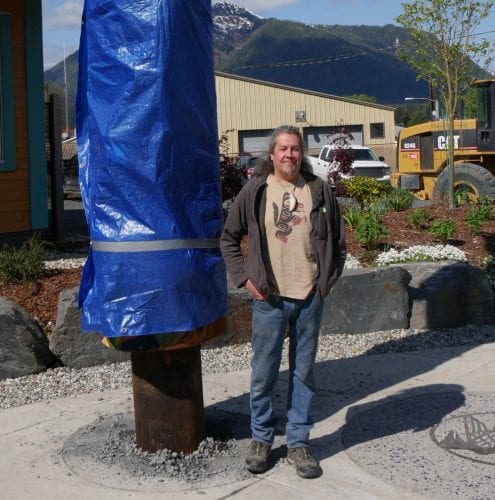 Tlingit carver Tommy Joseph of Sitka will unveil the story tellers pole Thursday, May 17 in front of the Petersburg Public Library. (Joe Viechnicki/KFSK)

The Petersburg Public Library Thursday, May 17, 2018 unveils a new outdoor carved wooden artwork that’s being called a “story tellers pole.” The piece has generated some opposition among the local Native community.

The artist is Tlingit carver Tommy Joseph of Sitka. He also carved Petersburg’s first ever totem poles, the eagle and raven poles raised in October of 2001. Joseph and the organizers of the project want to make sure that people know this latest work is not a totem pole and they are purposely not following traditional Tlingit protocol for welcoming a pole to its new site and raising it.

Because they are not following tradition, the artwork has generated a variety of reaction from local tribal members, according to Petersburg Indian Association tribal council president Tracy Welch. She writes that the library contacted the PIA about a month ago about the project with information about its non-traditional nature and she has since spoken with many citizens about the project. She also encourages people or organizations planning cultural activities or events to work with the tribe for feedback in the future.

The project cost 42,000 dollars and it was carved from a red cedar tree from Prince of Wales Island. The work was funded by the Rasmuson Foundation, the Petersburg Community Foundation, Friends of Petersburg Libraries and individual donors. It was transported from Sitka by Icicle Seafoods on the tender Windham Bay, arrived in Petersburg last Friday and was installed Tuesday morning.

Joe Viechnicki spoke with Joseph about the inspiration for his work.

Tribal members are invited to meet with Joseph and discuss the story pole on Thursday, May 17, 10 a.m. in the community room at the library. The unveiling of the pole is Thursday afternoon at 4 in front of the library. Nicole Hallingstad, granddaughter of Native civil rights from Petersburg Amy Hallingstad, is the featured speaker.

Thank you for reaching out to PIA about the new pole being installed at the library this week. In answer to your question, PIA doesn’t have an official standpoint on the pole itself. We had heard rumors about a pole being carved for Petersburg, but were not really in the know as to who the pole was being carved for, what was going to be depicted on the pole, or where it was to be located. A month or so ago, we were contacted by the library and invited down to hear more about the project. The project itself was emphasized to be “non traditional” in nature. The vision of the carver was to use characters from literary stories that kids grew up reading about, rather than images/characters that you would traditionally see on totem poles in this region. I believe this is where the idea of naming this the “storyteller pole” originated from, unlike in the traditional sense, where all totem poles tell a story. I asked about the plan for raising the pole and whether there would be a traditional raising, and I was told that the carver had advised that as this was a non traditional pole, a traditional raising was not called for.

As with any project or idea, there have been a wide variety of responses from our tribal citizens. I have spoken to a good number and cross section of citizens, gathering feedback and explaining the vision behind the pole, as it was explained to me. I think as people learn more about the artist’s vision behind the piece, that it was meant as more of a piece of art than a representation of Tlingit culture, and why a traditional totem pole raising process was not followed, some of those responses will change a bit.

One reoccurring theme that I’ve heard has been centered around consultation and wishing that the local native community had been part of the discussion as this project moved from idea to completion. Going forward, I would encourage people or organizations that are planning cultural activities or events to work with your local tribe/tribal citizens for planning/feedback.

We are very excited to see the revived interest our local community has in learning more about Tlingit and Haida culture and we look forward to bringing more cultural activities to town in the near future.

Again, thanks for reaching out and I hope this answers a few questions. Have a great week!