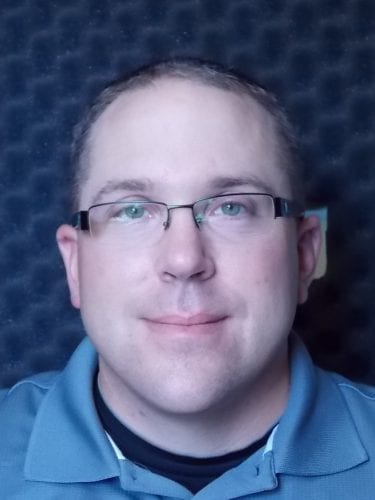 Petersburg police sergeant James Kerr is one of four finalists for the chief’s job. (Joe Viechnicki/KFSK)

Petersburg plans to interview four finalists for the position of police chief this month. The borough is seeking to fill the position with the planned retirement of outgoing chief Kelly Swihart at the end of the month.

20 people applied for the job and four will be interviewed in person. The applicants were reviewed by the public safety advisory board and recommended by a screening committee of borough staffers and others.

One local candidate is among the finalists. Sergeant James Kerr has worked with the Petersburg Police Department since 2013. Prior to that he worked as a police officer in Kingman, Arizona and started his career as a deputy with the sheriff’s office in Mohave County, Arizona. Kerr is married with two sons and writes that he moved to Petersburg for the quality of life.

Derek Bos of Colorado Springs, Colorado owns a security consulting business after a long career in various roles at the sheriff’s office in Chaffee County, Colorado. While there he worked as under-sheriff, commander of the patrol division, sergeant and patrol deputy. Before that he worked in campus security on for college in Iowa. He’s studying for his masters degree in criminal justice and law enforcement administration through and online program at Colorado State University. He has a wife and three kids.

Another finalist is Joe Gasper of Glenwood, Springs Colorado. He’s a sergeant at the Basalt Police Department in Colorado. Before that he worked for the police department in Saint Petersburg, Florida as a police officer and senior detective in the special victims unit. He has a prior career in business and manufacturing. He has a business degree from university in Fort Lauderdale and an undergraduate degree from a university in Tampa, Florida. Gasper is a competitive power-lifter, martial arts instructor and youth football coach.

Steve Lewis is a detective sergeant in the sheriff’s office in Klamath Falls, Oregon. He’s worked there in various roles since 1987. While there he started up and supervised a canine unit, using dogs to detect illegal drugs and do other law enforcement work. Lewis ran a campaign for Klamath County sheriff in 2016 but was not elected.

The borough plans to bring the three out-of-town applicants and their spouses to Petersburg. All four will be available to meet the community on June 12 and will be interviewed on the following day.