Driver in fatal van wreck to change plea next month 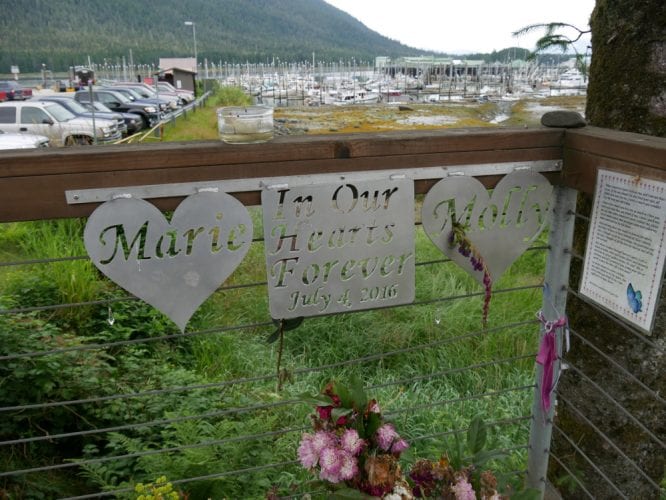 The crash site on South Nordic Drive is marked by a memorial for Marie Giesbrecht and Molly Parks. (Joe Viechnicki/KFSK)

It looks like the driver of a Petersburg borough van that crashed on July 4th, 2016 will not be going on trial for murder and manslaughter charges this summer. Attorneys in the case have reached an agreement on a jail sentence for the fatal wreck.

In two court appearances this month the defense attorney for 25-year-old Chris Allen told superior court Judge Trevor Stephens of Allen’s intention to change his plea. He plans to enter a guilty plea to a manslaughter charge in exchange for the state dropping other charges against him. He was charged in the deaths of Molly Parks and Marie Giesbrecht when the van he was driving flipped over just south of downtown. Those three and another passenger were working for the borough’s Parks and Recreation Department and helping set up for a recreational running race that morning.

Allen was originally charged with two counts of murder in the second degree, an unclassified felony, and two counts of manslaughter, a class A felony, along with assault in the first degree and unsworn falsification. The state alleged that Allen suffers from a seizure disorder, ignored doctor’s orders not to drive a vehicle and lied on applications for a driver’s license. The prosecution alleged that Allen had a seizure while driving that morning and was unresponsive at the wheel when the van crashed.

Defense attorney Julie Willoughby and prosecuting attorney Adrienne Bachman told the judge they had reached an agreement for a 16-year jail sentence for Allen, with nine years suspended, giving him seven years to serve. His other conditions and probation would be set by the judge, who also has to approve the sentencing agreement.
Willoughby told the court that Allen had to consult with a doctor before reporting to serve a jail sentence.

Willoughby had motioned for the judge to dismiss the indictment citing numerous errors in the grand jury presentation. However, Stephens ruled against that motion July 9.
A change of plea hearing is scheduled for Wednesday, August 8th at 1 p.m. Meanwhile, the family of Molly Parks has also filed a separate civil suit against Allen, the Petersburg borough and the state of Alaska.