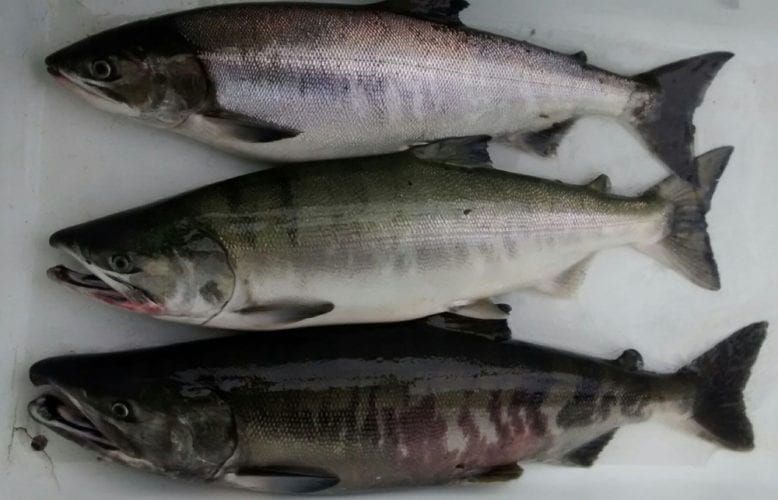 Operators of fish hatcheries in Southeast Alaska are a little puzzled with early returns of chum salmon this summer. The numbers of four-year-old dog salmon are not living up to expectations, while younger and older fish are making up a bigger portion of this season’s catches.

Hatchery managers say the four-year-olds make up the bulk of chum returns, while three-year-old and five-year-old fish return to spawn at the same time in much smaller numbers. The numbers are skewed this year with bigger percentages of those younger and older fish.

At the Hidden Falls hatchery on Baranof Island, the Northern Southeast Regional Aquaculture Association had a forecast for a return of just under 600,000 chums. But NSRAA general manager Steve Reifenstuhl expects the run will not meet that forecast.

“Well I would say yes under any other year but we’re seeing some anomalies that we haven’t seen before, a tremendous number of three year olds, which is very unusual for Hidden Falls, normally it’s two percent or less,” Reifenstuhl said. “And right now we’re running 13 percent three year olds. Also the four year old age class is weaker than expected. So it’s kind of being held up with more fives than we thought and a lot more threes.”

He’s seeing an even larger proportion of three-year-old chums returning to Deep Inlet near Sitka. Reifenstuhl thinks there was some kind of significant survival event for chum salmon for the three-year-old fish. It could bode well for the future but then again maybe it doesn’t.

“It probably means there’s going to be very large returns of four-year-olds in 2019 but I would caution that it could mean that the survival event was so good that there was so much feed the fish grew so rapidly that many of the fish that would normally return as four-year-olds crossed that threshold in size and returned as three-year-olds,” Reifenstuhl explained. “So you have to be careful because this is anomalous. It could be, you know, one of those two.”

Hidden Falls is an early season spot for the seine fleet to catch hatchery chums. By mid-July the total catch there had reached 283,000, valued at 2.1 million dollars at the docks. About 200,000 chums are also needed for brood stock, or the next generation. While NSRAA gathers those broodstock fish, Reifenstuhl doesn’t expect any further seine openings for at least 2-3 weeks, if at all.

Seine catches there have not been great. The fleet totaled 61,000 during a one day opening in early July. With 94 boats there that made the average catch only 649 chums per boat. Other openings have been slightly better, with averages just over one thousand chums a boat.

Seiners have also had several shots at hatchery chums at Amalga Harbor near Juneau where fish are returning to Douglas Island Pink and Chum. A Thursday opening the second week in July at Amalga saw 80 boats landing 125,000 chums, or a little over 1500 per boat average. The week before, 84 boats netted around 86,000 total.

DIPAC executive director Eric Prestegard was hoping for bigger catches at Amalga and says DIPAC’s returns are a little mystifying this year.

“Both fives and threes should be over forecast,” he said of the returns. “The four-year-old component is the mystery one and it just doesn’t seem to be showing as much strength at this point that it should. So we’re kinda watching that closely. So it’s been a decent return but not a great return.”

For all its release sites, DIPAC is forecasting a total chum return of around three million. By the second week in July, catches of DIPAC chums had topped 1.3 million. That includes some decent hauls for drift gillnetters fishing in the waters around Juneau and Lynn Canal.

Prestegard speculates that warm ocean conditions may have played a part. “So brood year ‘14 went out in 2015 out in the ocean,” Prestegard explained. “That was sort of the tail end of but sort of in the mix of that warm blob and all that. So who knows, the ocean I guess was not a good place at that point in time but then certainly it certainly changed and the blob went away. And so it does appear these three-year-olds not only is there pretty good abundance but there also is very good size. So they did quite well this last year in the ocean.”

DIPAC’s returns last year doubled projections at over four and a half million. Prestegard expected more seine openings at Amalga on Thursdays in July even while that organization collects fish for brood stock and to pay for operations.