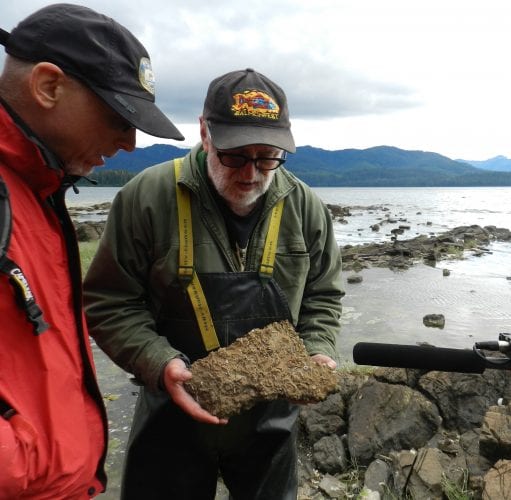 Many in Alaska have a working knowledge of the plants and animals around them, and spend the long summer days exploring and collecting. One group of friends, mostly from Ketchikan, likes to travel an older, hidden version of this landscape.

Ketchikan based artist Ray Troll was doing what expedition leaders do when they accept that they are off track: reflecting next to the campfire.

“This morning we had a good day, didn’t we? But here we are on day two, and nothing, we’re skunked. We can’t find the spot,” he said. “And that’s actually the beauty of this stuff. You may think you know where the fossils are, but you know especially in Southeast Alaska, they are not easy to find.”

Troll is a self-described paleo nerd. He has spent his life drawing animals – living and extinct – and learning from the people who study them. One thing he has learned is that all landscapes hold evidence of their geologic past. Only, Southeast Alaska’s is hidden with trees and water.

“You gotta have a friend with a boat,” he said. “Or an airplane.”

Troll’s friend with a boat was Josef Quitsland, a metalworker and artist from Petersburg. Also on the trip was Ketchikan UPS man, pilot, and poet Tom Fowler.

“We are politically opposite but it’s Alaska and political opposites can exist together in Alaska,” Fowler said.

Troll added, “our votes cancel each other out.”

Dave Strassman, who currently lives near Los Angeles, is another of their fossil-hunting friends. Strassman first met Troll and Fowler just before the birth of his son Carson, 15, also traveling with them this summer. Back then, Strassman was preparing to follow his wife to Ireland, tying up loose ends at their house in Ketchikan and building model planes in his spare time.

Strassman said Fowler introduced himself when he delivered those planes for UPS: “he goes, ‘what are you delivering?! Well, I’m a pilot!’ I go, ‘Well, look at my shark’s teeth.’ He goes, ‘you should meet Ray Troll…’”

“So then I grabbed Ray one day and said, ‘you gotta meet this guy.’ I said, ‘he’s got dinosaurs that dance in his garage.’ So we went out there and he had three different dinosaurs that you could pick any song you wanted them, and he’d interact with them completely wireless,” Fowler said.

“And when you ask him what he does,” Troll said. “He’s a ventriloquist!”

Strassman prefers the title entertainer. Anyway, these guys share an obsession with what some call “deep time”. The last weekend in June, they were retracing a trip Troll took with a paleobotanist a few years ago in the Tongass National Forest.

The group had to work around the tides. Usually the rock layers that hold fossils are exposed along the shoreline. An hour before low tide on the first morning, they hopped off the boat with a few hammers, a crowbar, and a chisel to look for plant fossils from the Cenozoic era, about 55 million years old.

This island was tropical then, with palm trees and, Troll said, “tiny horses.”

“The horses would have been about the size of a beagle. The dinosaurs were extinct by then, but there were these large birds that stood maybe eight feet tall. There’s debate as to whether or not they were meat eating birds or whether they ate anything they came across or whether they were plant eating birds. I like to think they ate the tiny horses because that’s an image that I’ve drawn a few times,” he said.

At first, everyone spread out, poking around different corners of the beach. Fowler crouched down near a row of sandstone rocks near to the boat, tapping the edges with his hammer.

“Sometimes, they break right in the right spot and there’s something phenomenal in there. Sometimes, it’s just like this,” Fowler said as two pieces fall apart, revealing nothing, “but you can see all the different layers and when you look, you know the whole floor here would have been just covered in forest debris just like in the forest over there. And here we are, finding it all very interesting.” 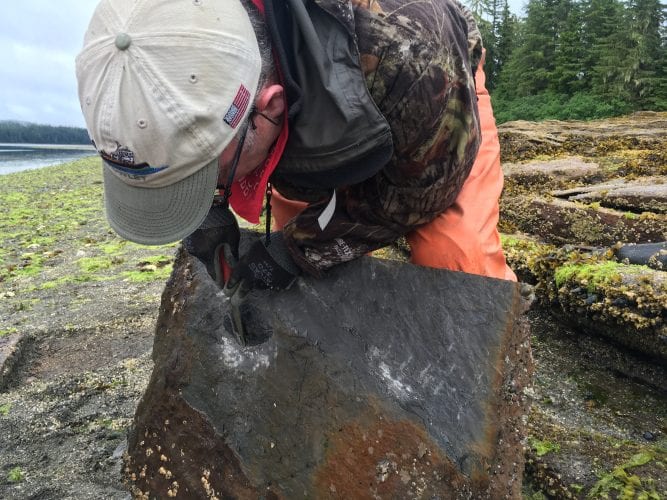 Tom Fowler of Ketchikan scrapes off a thin layer of sandstone to reveal the impression of an ancient leaf.

Further down the beach, the sandstone flaked off like paper, coated in black splotches that represented really old plant material, but the goal was to find something sturdier and better defined. At one point, everyone congregated around this one slab. The corner of a leaf was sticking out from between two layers.

Fowler and Carson Strassman worked to make a clean break, with Dave Strassman standing over them and cheering, “what do we got? What do we got boys? Look at that! It’s a forest floor! Look at that. Holy schmagoli.”

It is legal to collect roughly 10 pounds of plant or invertebrate fossils in National Forests. This story does not include any of the names of locations because scientists and enthusiasts want to make sure that some of these fossils stay where they are.

Researchers a few years ago cut out a giant palm leaf that is part of a new Smithsonian exhibition. The island they visited on the second day is where scientists found a fully intact fossil of a marine reptile called a thallatosaur. It is also where they stood around the campfire, a little humbled after not finding the 250 million-year-old Triassic fossils that Troll knew were somewhere nearby. He seemed to have almost as much fun imagining the world that created them.

“These rocks were actually part of an island chain and maybe even a subcontinent that was way over by Australia or Hawaii and beyond at least,” Troll said. “They were on a conveyor belt across the ancient Pacific Ocean that has come up against North America and gone under North America and there are shards that split off and oozed to the side, and that’s what this stuff is right here.”

He said, each of the shards they visited showed up at different points in Earth’s history.

“You know it just drives home this idea of a dynamic, changing planet with a deep, deep history that will just blow your mind, and you begin to look at this landscape and it almost melts before your eyes,” Troll said.

Of course, this history is still unfolding. Troll and his friend Fowler disagree on some of the politics around climate change, although both agree that it is happening.

“We have begun to understand that big things can happen on this planet and we are all sensing that the world is changing,” Troll said. “And Tom’s looking at me with – he’s raising his eyebrows…”

“…we know that the world is changing rapidly right now. The weather systems are changing. We’re trying to understand it,” Troll said. “And the only way to know, really, is to collect all the data that you can, and there’s a lot of the data that we’re standing on right here, right now.”

The next day, they took the fossil-fueled boat to a different island, and found the remnants of animals that existed on the other side of the Permian – Triassic extinction, which scientists consider to be the largest in Earth’s history.

Ray Troll is part-author of a book about the geologic history of the West Coast from Baja California to Alaska called Cruising the Fossil Coastline, which comes out in September.