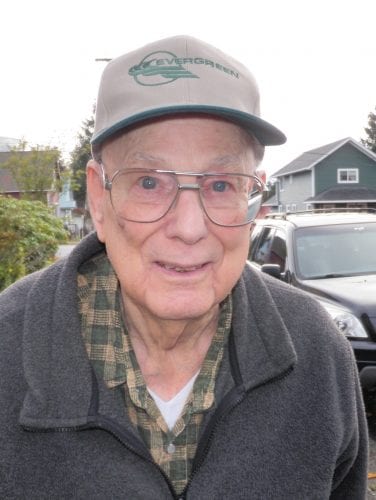 A pioneer in aviation in Petersburg died Monday, July 30 at the age of 94. Bill Stedman was a mechanic and pilot for about four decades based in Juneau and Petersburg with Petersburg Air Service, Alaska Coastal Airlines and Lon’s Flying Service.

He was born in Petersburg September 27, 1923 and raised here. He got a job while in high school working for Petersburg Air Service gassing up planes and other chores. He flew his first solo flight in 1941 at the age of 18.

He first got his mechanic’s license and then moved to Los Angeles for a year and a half to train as a pilot. Stedman received his commercial pilot’s license in 1954. One of the planes he flew was the legendary amphibious plane the Grumman Goose. He flew that for Alaska Coastal Airlines bringing passengers and freight to remote spots around Southeast and reminisced about it during a 2012 interview.

“It was a really, really good airplane, very forgiving and it had a lot of power, which was fantastic,” he told KFSK. “You know you could do a lot of things with that airplane. And it carried a real good load. We used to fly a lot of freight, especially on the west coast run. We flew mail to Kake every day and you know we’d put 1500 pounds of mail in the airplane.”

Stedman was honored with the Federal Aviation Administration’s Charles Taylor Master Mechanic Award in 1997. And in 2012, the Alaska Air Carriers Association named him an Alaskan Aviation Legend. Stedman had a book of his flying stories and Petersburg history called “The Bushed Pilot” published in 1998.

A funeral service is planned for Saturday, August 4th at 2 p.m. at the Petersburg Lutheran Church.