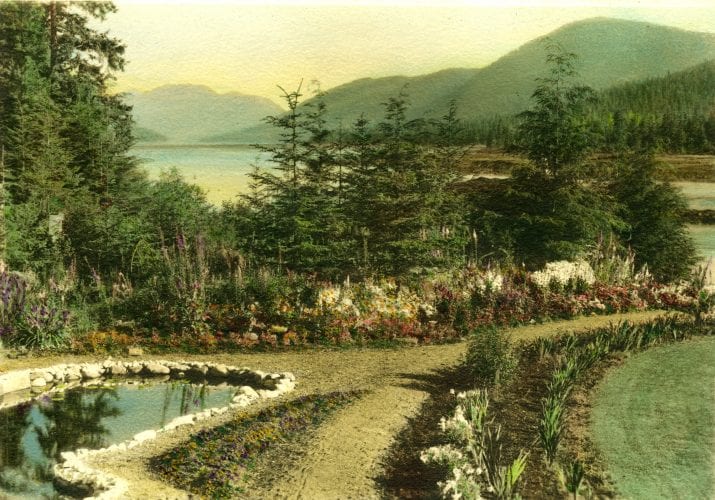 A hand-tinted photo from the 1930’s shows a garden growing at Green Rocks south of Petersburg. (Photo by Mary Allen, courtesy of the Clausen Museum)

Some of you might think gardening in Petersburg is impossible. The rain forest brings too much rain, there are slugs and a lack of good soil. But an exhibit at the Clausen Museum, “August Harvest” shows that some residents about a hundred years ago had figured it out.

The exhibit features blown up black and white photos from the area’s early settlers showcasing huge harvests of fresh produce. It shows people gardening in Petersburg and on nearby islands from the 19-teens through the 40’s. Many of the photos came from Mary Allen’s collection of photography from the 1930’s.

“The photos are proof,” said Lizzy Walsh, the museum’s director. “You have these beautiful zucchinis, squash, and root vegetables. . .”

Walsh walked me through the exhibit, which includes photos and information from the town’s first fair in the 1930’s. 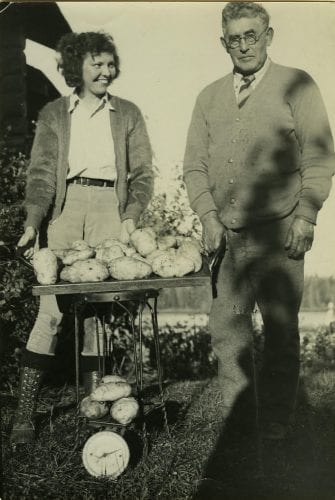 The exhibit, “August Harvest”is on display at the Clausen Museum through August 22.

Vegetables on display at Petersburg’s first annual fair in the 1930’s. (Photo by Mary Allen, courtesy of Clausen Museum)