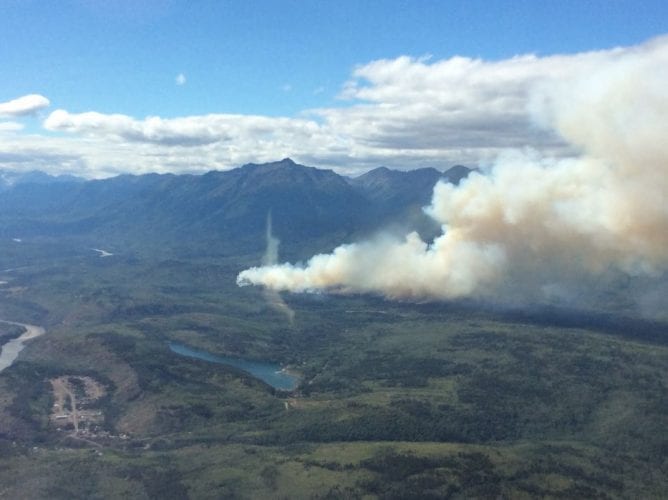 Fire burns near the Stikine River and Sawmill Lake near the community of Telegraph Creek. (Photo courtesy of the BC Wildfire Service)

Wild fires continue to burn near the Stikine River in British Columbia but are now partially contained.

The Alkali Lake fire was discovered August 1st and is estimated to have burned an estimated 96,000 acres. The fire is now 11 percent contained, according to the BC Wildfire Service. Fire fighting crews are working to minimize further impact to Telegraph Creek and Glenora, two small communities on the river where some buildings have burned.

“We’re seeing increased inactive edges of the fire and it’s a very slow moving ground fire for the most part but when winds pick up we see increased fire activity,” said Torbjorn Rive on Tuesday. He’s a fire information officer at a fire fighting camp in Dease Lake.

It’s an improved status for the blaze that was started by lightning and was burning out of control earlier this month. The regional government declared a state of emergency early this month and an evacuation order was issued for the area. Residents in the two communities left for nearby towns. Telegraph Creek is about 160 miles from the Southeast Alaska city of Wrangell.

Higher winds are expected were expected in the area Tuesday afternoon which could spread the flames.

An incident command crew from Australia has been leading the effort to battle the blaze. Rive said fire fighters from across Canada and some from Mexico are working both day and night.

“Well we’ve got a total of 170 people here,” Rive said. “We’ve got a night shift going and they’re working on and in support of protecting structures and critical assets. So you know we focus on lives and we focus on critical infrastructure and saving as many homes and other values as much as possible. We’ve got I think 19 pieces of heavy equipment, working on fire guards and that includes four water tenders and we got nine helicopters up here, doing things like bucketing and a little bit of foaming operations.”

Meanwhile, electrical power has been restored to Telegraph Creek. Traffic has been slowed on the main highway through the area, highway 37, because of heavy smoke. The roadway to Telegraph, highway 51, is open only to fire-fighting crews and critical staff.

Many other blazes are burning throughout the province. The BC government declared a state of emergency August 14 with over 500 active fires.