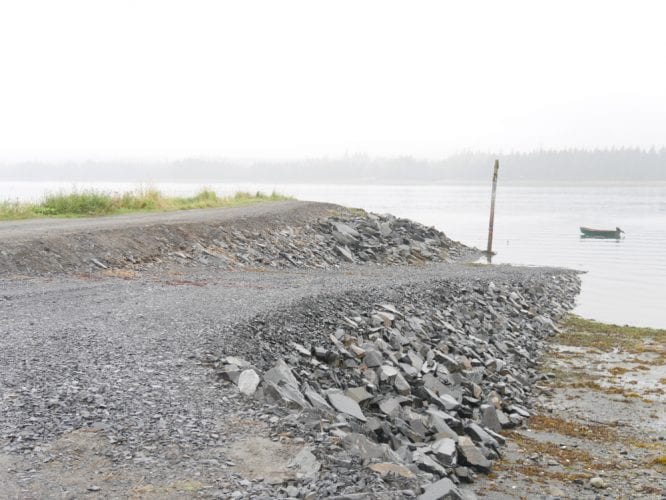 Petersburg Marine’s new ramp was completed this month south of the existing ramp at the Scow Bay turnaround. (Joe Viechnicki/KFSK)

After years of permitting and planning, a local business owner has finished a new boat ramp in Scow Bay.

Petersburg Marine owner John Murgas on Saturday welcomed the public to see the new large vessel ramp he had constructed on borough property he is leasing just south of the existing ramp at the Scow Bay turnaround. Petersburg Marine hauls vessels and stores them at a yard just across Mitkof Highway.

“We’re using both,” Murgas said of the two ramps at Scow Bay. “The new one just got finished last week. And so we’re still learning how to use it and learning its personality and so forth. So far it’s working out super good, it’s very smooth and the gradient is perfect and we’re real enthused about it.”

Murgas hired a contractor to build the ramp with rock. It’s up against the jetty at the turnaround and is more protected from southerly winds than the existing ramp.

“It’s a tremendous improvement in the safety here,” Murgas said. “Of course we put it in for primarily for the windy days when it’s blowing southerly and it’s well protected from the winds and it gives a lot more versatility of handling the boat safely.” 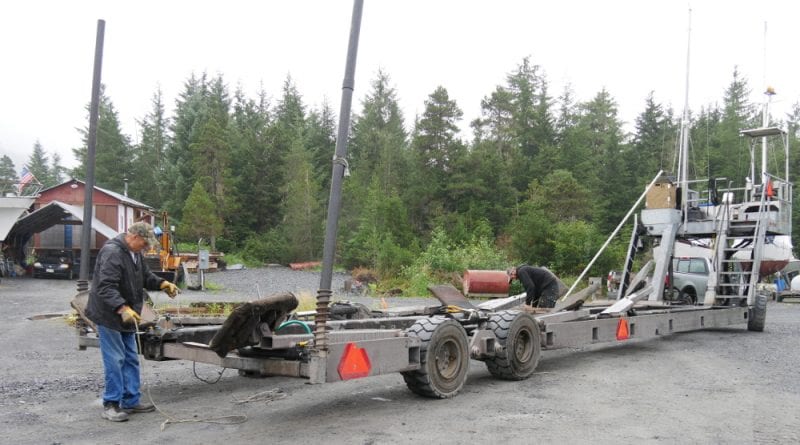 Petersburg Marine has two trailers for pulling boats and Murgas said he could be hauling on both ramps at once if he’s busy enough. He said a ramp at that location has been a dream of his since 1980 and he got more serious about pursuing that dream in the last few years as his business has grown.

“It’s just part of the continued growth,” he said. “It doesn’t seem to be too impressive at the time but if I look at where we were 4-5 years ago, 10 years ago, it’s whoa, we’ve come a long ways.”

Murgas initially applied to the borough for a special use permit, which would have allowed a public use ramp. However, the borough assembly voted down that request at the beginning of the year over concerns with the permanent nature of a permit and setting a precedent for other businesses that lease tidelands. So, Murgas pursued a lease of that land instead and, as a result, the ramp is private, for use by his company only. It also could be removed in the future if the borough secures funding for building more of a boat yard at the site or even a harbor.

The end of the summer months and the change in fishing seasons is a busy time at the boat yard. Petersburg Marine has been hauling on high tides for nearly two weeks straight.