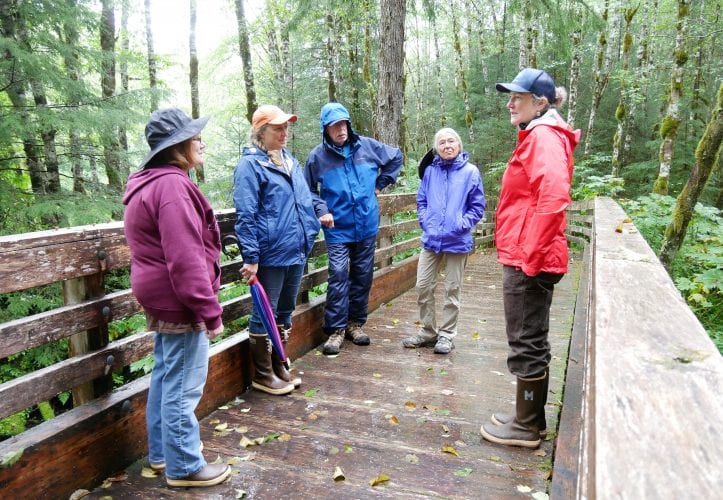 Salmon scientist, Megan McPhee. (in red jacket) leads a group on a field trip to a salmon spawning stream near Petersburg as part of the Rainforest Festival. (Photo by Angela Denning/KFSK)

The 11th annual Rain Forest Festival wrapped up in Petersburg this weekend. This year’s theme focused on salmon. There were many workshops and field trips on and off the water. KFSK’s Angela Denning went on one to a salmon spawning stream to find out more about Alaska’s most popular fish.

About 20 miles south of Petersburg by road a few Chinook salmon are slowly swimming in a very shallow gravel creek. They’re not looking very…fresh… at this point.

Megan McPhee is leading our small group. She’s with the College of Fisheries and Ocean Sciences with the University of Alaska Fairbanks.

“Oh, there’s digging right there, you see the female on her side?” McPhee said. “She’s flopping and so what she’s doing is digging a depression in the gravel. And that does two things. It makes a little hole that she could put the eggs in. And also you’ll notice when she does that you’ll see a cloud of silt come up in the water and then float away. So it cleans the silt out of the water.”

Too much silt isn’t good for the eggs because it can suffocate them.

Salmon are an unusual fish because while most species take days to weeks for their eggs to hatch, salmon take months. They overwinter in the gravel. Today, the effort to nest the eggs is everything these salmon are living for.

“They’re hormones are just going nuts, their stress hormones are off the charts,” McPhee said. “Their body’s decomposing, their immune system’s gone. They start to get covered in fungus because their scales reabsorb into their bodies so they have calcium in their bodies and they, yeah, they just fall apart. It’s really interesting and kind of sad.”

McPhee gave the festival’s keynote address at the town’s auditorium. She’s done a lot of salmon research around Alaska and has studied why salmon are smaller than they used to be. She says there likely several reasons why. One is because they’re returning to spawn at a younger age. Studies show that salmon are growing faster and returning to spawn earlier. And that makes them smaller.

“So it’s kind of a paradox,” McPhee said. “A faster growing fish will actually be among the smaller of the adults because they surpass a threshold for size at an earlier age where their internal status tells them it’s time to mature.”

Another reason could be an increase in predators targeting larger salmon specifically, like killer whales and salmon sharks. There are a lot of unknowns. She says there’s much more research that needs to be done. 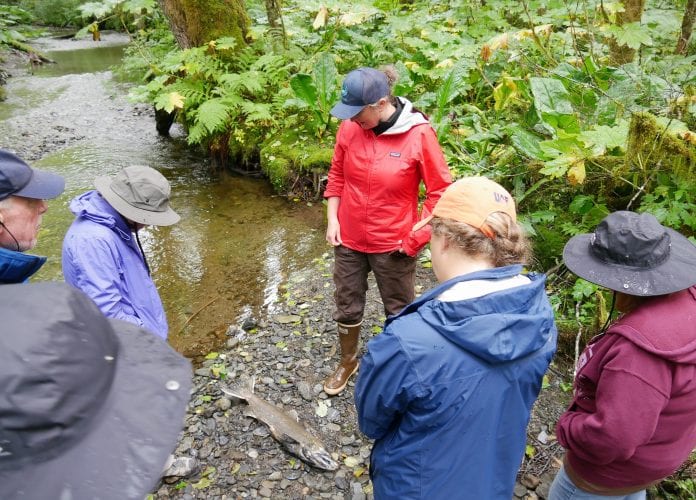 Salmon Scientist, Megan McPhee, talks to a field trip group about a spawned out Chinook salmon in a creek near Petersburg as part of the Rainforest Festival. (Photo by Angela Denning)

“Any little thing– you can ask question–and they’re telling you stuff and so your mind starts generating more questions,” Pregenzer said.

“The most amazing thing about salmon is how they can find their way back,” Dial said.

“The olfactory map,” Pregenzer chimes in.

“Yeah, they smell,” Dial said. “But you know, I couldn’t find my way back based on that. That’s amazing.”

It’s relatively easy to study salmon when they’re spawning here in a creek but it’s much harder when they’re hundreds of miles away in the deep ocean. There’s a real lack of data for that part of their lives. McPhee says a big challenge is the technology to track the fish. Some tagging projects have actually attracted salmon sharks to the fish because of the large batteries they’re carrying. So, really, what could help is a better power source for the tags.

“If you could somehow use the energy of the fish-swimming-muscles to somehow recharge something that would maybe work,” McPhee said, laughing. “But I’m not an engineer so I’m talking nonsense!”

In any case, McPhee says what is definitely needed is an international effort in ocean-going surveys, having a lot of people in a lot of places working on the same goal. To find out what does happen to the salmon out there. And then they can share that knowledge with the public in a festival like this.

The Rainforest Festival was held in Petersburg September 6-9.