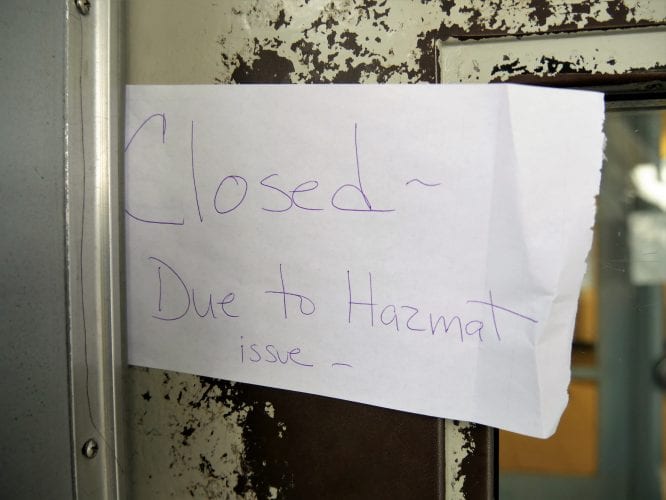 A note was posted on the door at Petersburg’s post office Thursday, September 14, 2018. (Angela Denning/KFSK)

Petersburg’s Post Office was closed Thursday because of a hazardous materials spill. The U.S. Postal Service issued a statement that a package at the facility had leaked some mercury. Customers at the building Thursday were asked to leave.

The statement reads, “While the amount of mercury is not considered to be serious, the safety and security of our employees, customers and the mailstream is a top priority for the Postal Service. Out of an abundance of caution we are temporarily suspending operations at the Petersburg Post Office until the facility is deemed safe to re-occupy.”

The Postal Service apologized for the inconvenience. A crew was being flown in from Seattle Friday to do clean up work. Meanwhile, some limited mail service was restored Friday at the Petersburg Indian Association building nearby. A Postal Service spokesman declined to comment further on the package that leaked mercury or whether there would be any repercussions for the person sending or receiving it.

Mail customers in Petersburg don’t have home or business delivery but pick up mail at the post office. The building could be re-opened by Saturday.