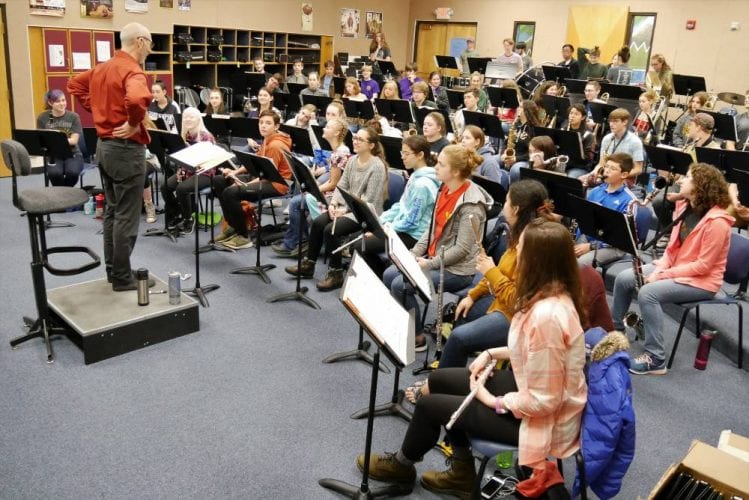 Over a hundred honors band and choir students from around Southeast are in Petersburg for the Southeast Honor Music Festival. The event runs three days–Sunday through Tuesday. KFSK’s Angela Denning spoke with a few students about their experience.


It’s Monday morning and dozens of students are playing music in the high school band room. That’s not entirely unusual but who the students are is. They’re the cream of the crop from all over Southeast. They first auditioned with their school’s music director and then directors from throughout the region got together and made the final list.

Directing them at the front of the room is Chris Harshman. He’s a music teacher from Whidbey Island, Washington. He’s here to give the honors students a different perspective on playing music.

“So the thing is every time you play, you’ve got to self-correct. You just access yourself; how did I do?” he said.

The students have known the music choices for a while now but this is the first time they get to practice it together.

Standing at the back of the room with other percussionists is Maddy Whitethorn a 16-year-old from Petersburg.

Also playing in Honors band is Roy Hayes. He’s 17-year-old and he’s one of two students from Klawock, on Prince of Wales Island. Back home there are only thirteen students in his school band.

Hayes: “I play the contrabass clarinet. It is a lot lower than a regular clarinet.”
Denning: “What made you decide to play that?”
Hayes: “It was just a really weird instrument in our school and I wanted to play it. No one else was playing it.”
Denning: “So you have experience, this is your third time [at Honors Fest]. How’s it going for you this year?”
Hayes: “This year it’s going a lot better. I actually practiced before coming here. The other two years I did not practice.”
Denning: “So you know the songs you’re going to play.”
Hayes: “Yes, I do.”
Denning: “How is it different for you, this kind of experience, compared to regular band at Klawock.”
Hayes: “We play a lot harder music than we do in Klawock.”
Denning: “Is that a good thing?”
Hayes: “Yes, I like it. It makes me happy to play harder music.”

Over at the Wright Auditorium, honor choir students have been practicing their songs. Soon, the two groups will come together to showcase their work in a community concert, Tuesday at 7 p.m. in the Petersburg High School gym.