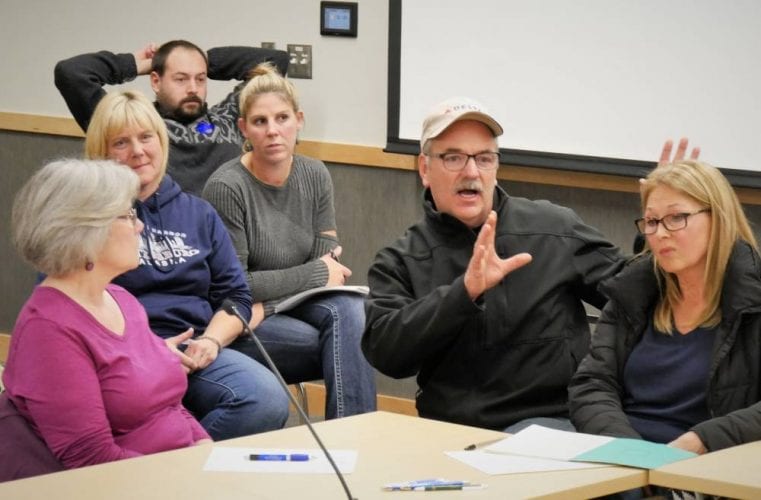 Petersburg resident, Ladd Norheim, talks about his concern with more cruise ships coming to Petersburg. He and other residents spoke during a public meeting, Oct. 6, 2018. (Photo by Angela Denning/KFSK)

Small cruise ships have been coming to Petersburg since the early 1980s. Now, some cruise lines are expressing interest in bringing in larger ships. KFSK’s Angela Denning attended a public meeting that has residents supporting and opposing the idea and what it could mean for a small island town.

About 45 people showed up on election night to talk about Petersburg’s visitor industry. It was an informal meeting hosted by the Chamber of Commerce that encouraged a round table discussion on the opportunities and challenges of tourism.

The meeting started off with a presentation by Dave Berg, the long-time owner of local travel agency, Viking Travel. He says there’s a need to diversify the community from the fishing industry. The Ocean Beauty Seafood plant shut down and the town’s aging population is well documented with more people every year becoming sales tax exempt.

“These visitors obviously diversify our local economy to a great extent because they’re spending room tax and bed tax money as they come into town,” Berg said.

Diversification is something locals heard about a few years ago when state economist Gunner Knapp spoke at a Chamber of Commerce dinner. His message to the crowd was that diversifying beyond one industry can help the fishing town sustain itself through rougher economic times.

Berg tried to quash fears that Petersburg could become like Juneau or Ketchikan where many large ships visit. He says Petersburg’s location is self-limiting with its narrow high-current channel. Cruise ships carrying more than about 250 passengers can’t navigate the waters. But Berg asked the community to consider other larger small ships that could anchor in Frederick Sound and lighter passengers into town; ships that carry 6-900 passengers. About two-thirds of passengers get off ships when they are anchored.

Berg says the passengers bring more revenue with them through fees, taxes, spending, and job creation.

“We have them in the summertime but we can enjoy those benefits and those revenue year round,” said Berg, “and so it can be a win-win situation for all of us,”

Petersburg gets about 9,000 visitors a year now, about half of what the peak was in the mid-2000s. Berg says Viking Cruise Line has offered to bring a ship that compares to the size of the ferry, Columbia, with about 600 passengers at capacity. They would stop in Petersburg eight times between May and September. He says they aren’t a company that operate stores in the towns they visit.

“I don’t see anyone who is interested in doing that here,” he said.

“It starts out as a good thing and as time goes on then they start bringing in their own people and cut out the locals and then before you know it you have these international diamond stores moving in,” Norheim said. “I know you say that’s not going to happen here but we’ve seen it happen in other places.”

Petesburg Borough mayor, Mark Jensen, says he was concerned about an influx of visitors taxing the town’s infrastructure.

“I know we need to diversity our economy but at what cost? At what gain?” Jensen said.

Some fishermen complained about an increase in gray water they’re seeing discharged from cruise ships. Borough assemblyman, Taylor Norheim, runs a tender boat, and says he experienced it this summer.

“I drove through that stuff for four miles, Forty-five minutes of driving through,” Taylor Norheim said. “It looked like alphabet soup almost. It was just disgusting.” 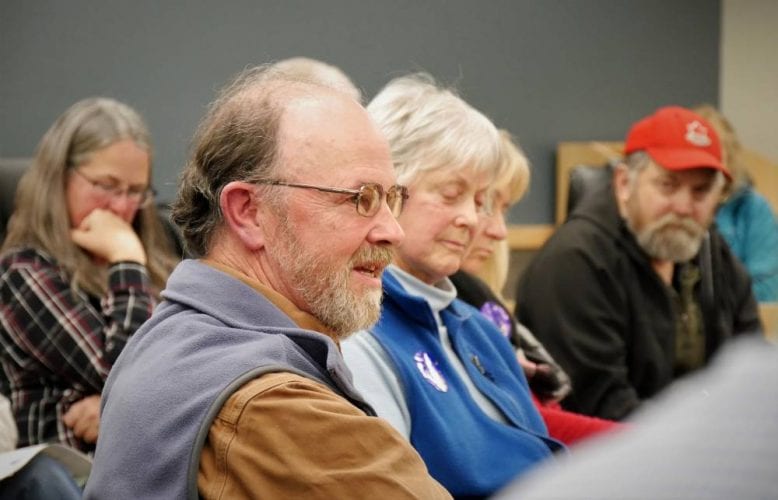 Petersburg resident, Scott Hursey, spoke about cruise lines that take passengers to Leconte Glacier that don’t come into town. He and others spoke at a public meeting, Oct. 6, 2018. (Photo by Angela Denning/KFSK)

Petersburg resident, Carolyn Pritchett, lives on Sandy Beach Road along Frederick Sound and says she is not in favor of large boats anchoring there.

“All day the lighter boats were going back and forth and back and forth. It was a constant whine, it’s like having a mosquito in your ear that you can’t get rid of,” Pritchett said. “And then at night they leave their generators on.”

“In this economy where so many people are trying to diversify themselves from fishing don’t you think this is a great opportunity for people to try something new?” Burrell said.

Studies project that Petersburg’s population will keep getting older with fewer young people planting roots. Now, seniors make up 18 percent of the population and that’s expected to grow to 28 percent by the year 2032.

Glorianne Wollen says more tourists could help create jobs for younger people so that they will stay around.

“All we’re really doing is really turning into a retirement community from my point of view…and a seasonal,” Wollen said. “I had 22 dark homes along Sandy Beach, the walkers side, as I came in here tonight.”

That sentiment was echoed by Chelsea Tremblay.

“I see how few of my classmates have chosen to come back or how few young people choose to stay here and you think about the room for growth in these industries,” Tremblay said. “We need more people that can fly planes, more people, younger people that learn about the history of town to do the walking tours.”

Tremblay says coordinating with the cruise lines can prevent many potential problems like where the cruise ships anchor up.

“I wouldn’t mind giving it a shot on a trial basis,” Kerr said. “I mean, let’s try it in the next year or two and see how the community likes it.”

The public discussion wrapped up with more questions than answers. The Chamber says more conversation is needed. They will be accepting written comments for the time being with no real deadline in place.