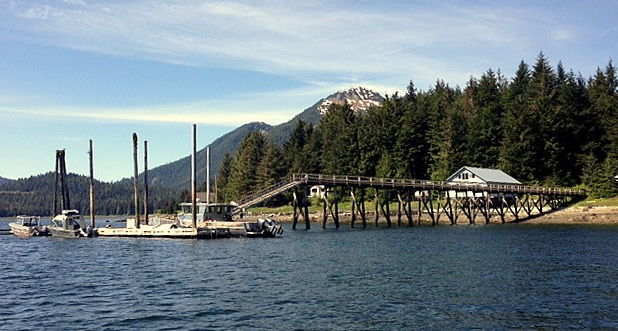 The end section of the Kupreanof dock was replaced this month. (Angela Denning/KFSK)

The small city of Kupreanof had a new section of dock installed this month. The dock is one of three owned by the state in the Petersburg borough. It was built in 1961.

Tom Reinarts is mayor of the second class city of 21 people, just across the Wrangell Narrows from Petersburg. He explained the end float of the T-shaped dock was falling apart.

“We’ve had to tie the foam billets underneath it with rope so they wouldn’t come floating out,” Reinarts said. “It was listing considerably. The wood structure underneath it holding the billets and everything together was all but rotten and there was some metal pieces there that were holding the various docks together that were all but rusted and gone and so it was in very bad shape.”

The dock serves the residents of Kupreanof and it’s also used by visitors on cruise ships and Petersburg residents hiking the trails on that island. The new float section is 95 feet long by 10 feet wide. Installation was done by Reid Brothers Construction of Petersburg. They also replaced piling on the shore side of the new float. Reinarts said the dock work cost around 100,000 dollars and is being paid for by the city of Kupreanof, cruise ship company donations and a federal grant from Secure Rural Schools money for projects around National Forest land.

Reinarts said these improvements take care of the most pressing needs at the dock. “Yeah it puts it together and gives us a float that is secure that when you’re tied up with a boat and the wind comes in it’s not going to pull it apart or anything like that,” he said. “It will hold together reasonably for some period of time but there needs to be a sense of urgency for the state to figure out what they want to do with that dock and either give it to the borough or give it to us so that we can then take action to get it done right.”

Reinarts said the dock still needs additional work but that will depend on grant funding. A consultant for the borough estimated overall replacement of the pilings, float, ramp and trestle walkway, would cost almost one point four million.

Voters in both the Petersburg borough and city of Kupreanof approved charter or code changes to allow Kupreanof to own that dock. The state has offered it to Kupreanof and Petersburg before but for various reasons the transfer has not yet been completed.