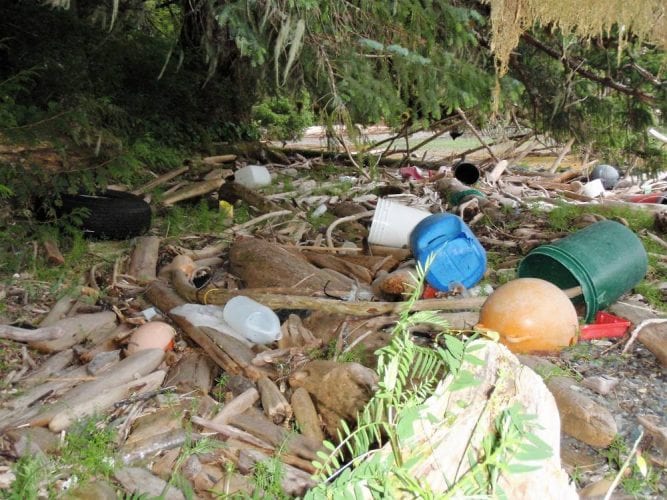 Marine trash on the beaches of Kuiu Island. (Photo courtesy of the U.S. Forest Service)

Anyone regularly traveling in Southeast by boat is bound to see trash in the water or on the beach at some point. Although the problem is not unique to the region some Petersburg residents want the solution to be local.

They call themselves “The Plastics Group”. It’s a grass roots effort to bring awareness to the issue of marine plastics and marine debris.

On Thursday night, the group is hosting a screening of the film “A Plastic Ocean” in the Wright Auditorium. It’s just part of the group’s process to educate the public on the problem. Their overall goal is to decrease the use of single-use plastics.

KFSK’s Angela Denning sat down with Plastic Group members Sunny Rice and Joni Johnson. They’re part of the Marine Mammal Center in Petersburg and coach science bowl teams at the middle and high schools. They wrote a grant and received about a $1,975 to kick start the project from the Petersburg Community Foundation.

For Johnson, the drive to make a change started while traveling in Hawaii with her sons. She says they saw Albatross chicks whose stomachs were filled with plastic pieces.

The moving showing “A Plastic Ocean” starts at 7 p.m. Thursday in the Wright Auditorium. The event is free and for all ages.