Hunting by bike banned around Greens Creek Mine

The Alaska Board of Game has banned hunters from using bicycles along a forest service road leading to Hecla Greens Creek Mine. The mining company had raised safety concerns following reported close calls between bikes and its heavy trucks.

Greens Creek Mine is on leased federal forestland on Admiralty Island.

The Alaska Department of Fish and Game reports the area attracts more than a dozen hunters a year, most of whom arrive by skiff from Juneau.

From the Hawk Inlet dock it’s about 9 miles to the mine site where hunters stalk deer. The public has non-motorized access on what’s known as the B Road.

“The nice thing about it was is that it was a day trip you could go do,” said 38-year-old hunter Josh Ivaniszek of Juneau.

But the mine’s federal lease allows it to drive its trucks on that same winding road.

“These are 200,000-pound gross vehicle weight haul trucks running both directions, hauling concentrates of tailings,” said Brian Erickson, the mine’s surface operations manager, in Jan. 12 testimony to the Board of Game meeting in Petersburg.

“We’re seeing an increase in the number of people utilitzing the road system, particularly with bicycles and pull-behind carts,” he said.

In a formal proposal, Hecla argued the board should ban all hunting along a quarter-mile buffer down its 9-mile B Road. The board considered the proposal and ultimately agreed to tweak the proposal.

It now prohibits hunting with the aid of wheels anywhere along that forest service road.

“So now they can’t use bicycles or other wheeled – like wheelbarrows and strollers and other types of carts to aid in their hunting,” said state Fish and Game Area Management Biologist Stephen Bethune. “So it’d be walk-in only for hunting purposes.” 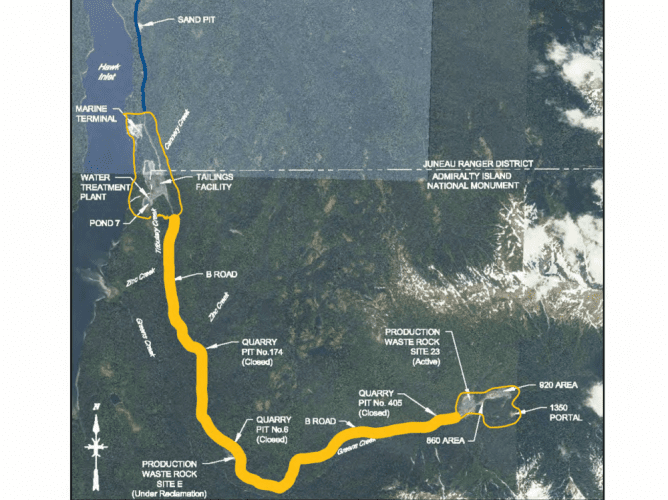 This cropped map provided by Hecla Greens Creek Mine to the Alaska Board of Game shows the 9-mile B Road marked in yellow. That is where hunting with bicycles or any wheels and carts would be banned. (Courtesy of Hecla Mining Company)

The board can’t cut off public access to federal land. So people can still ride bikes on the road to the mine. But if they do so, they can’t hunt. The public can still hunt in the area but only if they hike in and pack out.

Hunters have argued that wouldn’t be practical and it effectively shuts down hunting around the mine.

“I won’t waste my time hiking in there,” Ivaniszek said. “If I need to go for a four-day trip, I’ll go into the interior and go for caribou.”

Ivaniszek is also a former Hecla employee who worked at Greens Creek Mine from 2008 to 2014.

He said he’s seen Hecla managers first hand try to prevent the public from accessing the area even though it’s federal land.

Erickson also told the board that Hecla staff have tried to dissuade hunters from using its access road.

Ivaniszek said he feels the safety concerns about bikes and trucks are overblown.

“More often than not I’ve had trucks come over and tell me where deer are and where bears are to warn me ahead of time before I get into a blind area around bears,” he said.

Greens Creek Mine spokesman Mike Satre told CoastAlaska in an interview last month that hunting around a working mine isn’t safe.

“They are putting our employees at risk by shooting in blind areas, by leaving carcasses in places that attract bears in our work areas,” Satre said.

The mine site is also part of the City and Borough of Juneau which bans shooting a quarter-mile from any roadway. But state officials say that historically hasn’t been enforced by Juneau police.

The hunting ban won’t be in effect along what’s known as the A Road. That’s a five-mile stretch between Young Bay and Hawk Inlet.

The mining company said that area is popular for recreation but has less truck traffic.