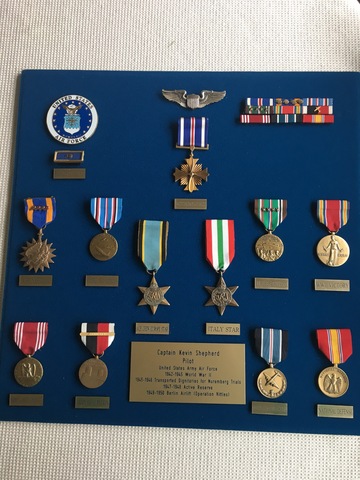 KFSK has an open airwaves policy. We encourage the public to express personal opinions, ideas and creative works.

The following was submitted for broadcast by Scott Hursey

TRANSCRIPT:
Hello, This is Scott Hursey. On this ocassion of Veterans Day we should take the time to remember and honor the service and sacrifices our veterans have given to protect our country and indeed, our values in many parts of the world. I would like to take this opportunity to share with you a letter that my mother received from her brother, my uncle, Kevin Shepherd while he was on assignment as a bomber pilot in Europe during World War II. It’s a ‘matter of fact’ account of the dangers faced and bravery shown by so many in that conflict an it gives us a glimpse into why some people have labeled them as ‘The Greatest Generation’

I received your most welcome letter yesterday. It seems ages since I have heard from you.

I shall try to tell you what I have done since I left Charleston. I left there on the 28th of Februaryfor Mitchell Field where I picked up all of our overseas equipment, which included a nice brand new shiny B dash two four. We were at Mithcell four days, but I was so busy that I left the field only one evening. New York seemed about the same as it was as the last time I was there. I was kind of tired & after being in the South all winter I was just about frozen so I just had a couple drinks at the Astor & went back to the field.

On the morning of March 5th I took off from Mitchell in a blinding snow storm. I finally broke out on top at 16,000′ after having picked up a lot more ice than is healthy to carry.

That evening we landed at West Palm Beach Florida and it was hot as the devil. Oh yes on the way down I buzzed the field at Charleton & called in to tell the boys good-bye. A lot of them came out on to the field to give us a good send off. From Mitchell we were on our own so we took a vacation for a few days at Palm Beach. I left there on the 11th. We flew down over the Dominican Republic & landed at Trinidad. From there to Belem, Brazil & on to Fortaleza. I stopped there for a couple of days and checked my plane thoroughly. Then the big hop across the South Atlantic to Dakar, North  Africa. We ran into a bunch of weather about midnight when we were about four hours out of Fortaleza. Let me tell you if you want a thrill try flying an eqitorial front in the middle of the Atlantic. That stuff goes to about 30,000 ft. And hundreds of miles long. Well after sweating it out for about 10 hours and 30 mins. I wheeled in at Dakar in a blinding sand storm. Some fun.  From there we flew across the Sahara to Marrakesh and then up to Tunis. There I checked into the 15th Air Force & they assigned me to a group here in Italy. I got all situated there and flew 3 missions and then orders came down from Air Force, transferring my Navigator Co-Pilot and myself to a B-17 outfit. I sure was disappointed losing my plane & crew but that’s the army. Oh yes, we named our 24 “Linda Mae”. Do you like it? (My mother’s middle name was Mae)

I got in this outfit which is the oldest outfit overseas at the present time. I flew three missions here as co-pilot & then they checked me out as first pilot. and gave me a crew. They are a good bunch and have all had several missions over here. I now have 16 to my credit. That isn’t too bad for the time I’ve been here, considering the weather and all. Our required number is 50 which still seems a long way off, but I’ll get ’em in this summer some way. I am planning on being home for Christmas. If I get there you had better be there to see me. I sure will be glad when this deal is finished & I get home again.

Oscar Ludwig is in the ordnance outfit attached to our squadron and he & I get together quite a bit. He sure is a good boy.

Well Honeychild I am going to tell of a little experience I had these weeks. I haven’t told the folks at home or Joy about it for fear they might worry a bit, but is all over now, so I’ll tell you.

We were on a mission over Ploesti, Rumania and the opposition was pretty rough. The flak was so heavy it looked like you could taxi across it. Of course old lucky Shep had to be right in the middle of it. We got shot up pretty badly, but none of the crew were hit. I managed to keep it in formation until we reach the coast of Yugoslavia on the Adriatic Sea. At that time we were flying at 11,000′ and my no. 3 engine started to burn. At the same time all the electrical went out. I dove the plane down from that alt. to about 1000′ & it was still burning badly. That was no good so I had one trick left, make a sharp pull out which would either tear off what was left of the tail or throw off the badly burning engine. Well, I guess I just live right cause the engine, fire and all went ripping off the wing. There I was at 300′ off the water with only about half an airplane & 2 good engines, because 4 was damaged when part of the wing fell off. Say, isn’t this a screwy deal? I have to laugh every time I think of it, of course it wasn’t very funny at the time. Anyway I managed to keep it flying until I was within 15 miles of the Coast of Italy, when no. 1 engine ran out of gas. Well that was the payoff. Now there was nothing to do but ditch it. I had the crew all braced up in the back end of the plane, & I set her down in the drink. I crawled out on top as soon as she stopped and we started getting the crew and life raft out. Boy! You never have seen a bunch of guys move so fast. We had everthing and everybody in the life rafts in 40 seconds.

We were still north of the line and in enemy territory. Pretty soon we were picked up by some native fishing boats. Well they were a bit hard to convince at first, in fact my engineer, bombardier & myself got some skinned knucklesout of it, but they decided they would have to head south with us or get tossed in the drink. It wasn’t long until a Canadian Rescue launch picked us up & took us into an Allied port.

I got my crew home the next day and not a man was scratched. I guess we were pretty lucky. Anyway here is what made me happy, yes your kid brother has been recommended for the Distinguished Flying Cross. It is funny how things happen in this kind of a deal, Hell, they can’t get me now, they had their chance & fumbled it.

Well Honeychild, I guess I have rattled on long enough. Write when you can and I’ll see you at Christmas time. Boy I will sure ever pitch a double-header then.

PS. Tell that ‘Schoolboy” to keep those range stations going, they are certainly sweet to come home on.

“Schoolboy” was my father’s nickname. He and my mother were living at Moses Point on the Bering Sea coast, maintaining the navigation equipment on an airstrip and helping with the ‘Lend Lease’ program. The US was giving fighter planes to the Russians to fight against Germany. Russian pilots would fly them from Moses Point across Russia to the front.

Uncle Kev went on to be awarded several more medals for his flying. After the war he was one of the pilots flying the Berlin Airlift, a very difficult mission delivering supplies to West Berlin when the Russians had it blockaded.

Thanks for listening, and thanks to our veterans.