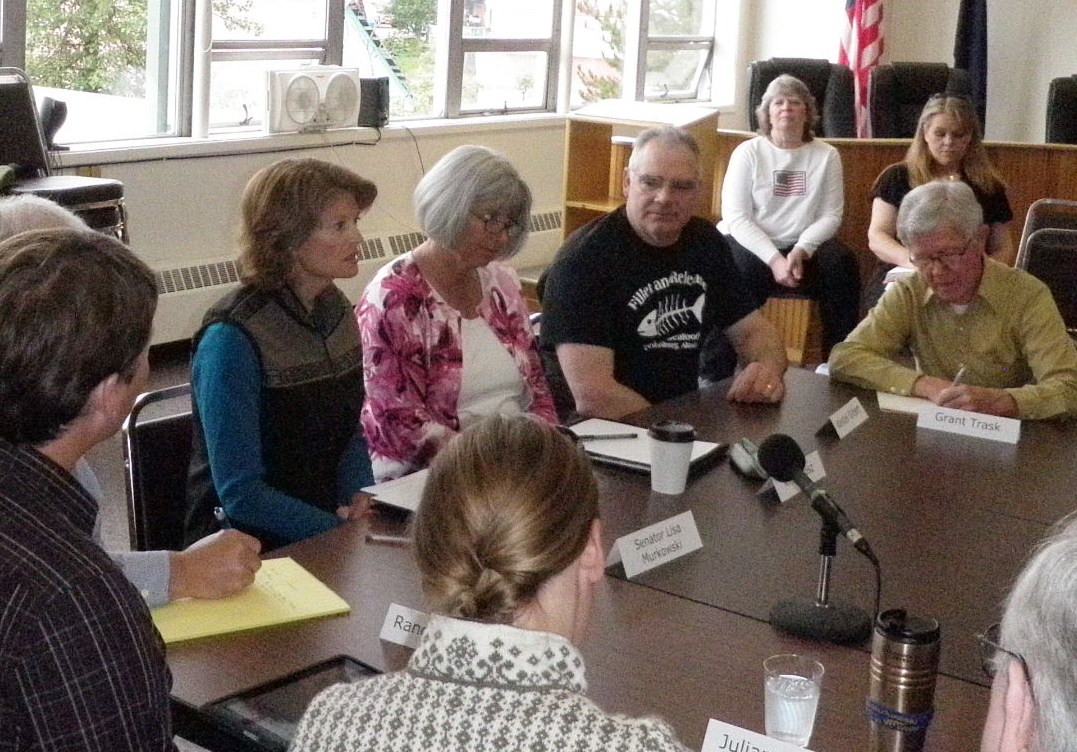 Republican Senator Lisa Murkowski heard growing concern over the expanding sea otter population in Southeast and pleas for relief from federal requirements for the region’s commercial fishing industry. Alaska’s senior senator met with representatives of the fishing fleet and seafood processing companies during a visit to Petersburg this week.
For iFriendly audio, click here:
In the town that fish built, just as the summer fishing season is kicking into higher gear, Murkowski heard a long list of concerns and questions from the commercial fishing and seafood processing industry.

Icicle Seafoods Kris Norosz asked about the future of the J-1 visa program. That allows foreign students to work seasonal jobs in fish processing facilities around Alaska. The U.S. State Department was planning to end the program, but granted an extension for this year. Murkowski thought there was hope because of that extension. “The simple fact that we were able to get them to allow for a bit of a reprieve for the summer demonstrated to me that they were actually paying attention to some of the comments out there,” Murkowski said. The state department issued 47-hundred J-1 visas last year in Alaska. Murkowski thought it would take public support to secure a continuation of that program beyond this year. 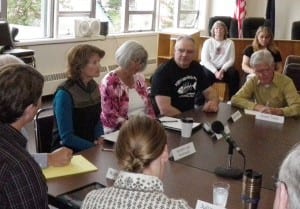 Another local fish processor, Wendel Gilbert of Tonka Seafoods told the senator his company is interested in expanding into new fisheries. “Such as flounder, such as shrimp again, such as, perhaps, kelp or seaweeds,” Gilbert said. “There’s a lot of different markets that aren’t being explored very much here yet. And we’d really like to do that because we’re a smaller operator we don’t have to be invested huge amounts of money into these smaller projects to get them off the ground. It’s one thing we can do.”

Gilbert’s comments sparked a familiar discussion in the fishing community, the impact of re-introduced sea otters on many commercially harvest seafood species. Murkowski said she wants to try and help increase the Native harvest of sea otters. “You know I look at this as an issue where you’ve got a species that has been introduced that is still considered to be threatened but the only thing that is threatened is every other thing below the food chain there cause the sea otter is not threatened. Whether it is possible to get the sea otter out from under the protection of the Marine Mammal Protection Act. Tough to do because the things are so darn cute,” she said, adding, “You probably don’t think of them as cute anymore.”

Otters were re-introduced to Southeast by the Alaska Department of Fish and Game after being hunted to near extinction in the region a century ago. They’re a protected species and Alaska Natives are seeking a loosening of the restrictions for harvest and sale of otter pelts. Julianne Curry, outgoing executive director for the Petersburg Vessel Owners Association wanted to see a change in the law designed to conserve threatened and endangered animals. “Because the Marine Mammal Protection Act isn’t built to deal with populations once they increase. And here in Alaska but especially in Southeast we have increasing sea otter populations, humpback whale populations, sperm whale populations, killer whale populations and sea lion populations. And there’s nothing built in place to help once things start to get out of control and populations get too large,” Curry said.

A number of people at the fishing roundtable reinforced the concern over sea otter impacts. Icicle Seafoods fleet manager Randy Lanteign told the senator that the expanding sea otter population is limiting the diversification of Petersburg’s fishing fleet. “If the otters are able to take away, say we lose the Dungeness fishery. That’s a big part of the small boat fleet and their opportunity to make money through the year. It’s also a big part of our employees, that are year-round Petersburg residents who rely on those bits and pieces of processing work to be able to afford to stay here, as fuel costs go up, all these other things,” Lanteign said.

Other concerns were over Coast Guard vessel safety compliance and vessel discharge permitting. Murkowski noted a new piece of legislation, the vessel incidental discharge act, introduced last month by Alaska democrat Mark Begich. The bill would define and exempt from other permit requirements deckwash, ballast and other discharges incidental to the normal operation of a vessel in U.S. waters. “It’s got 1,2,3,4,5,6 eight co-sponsors on the bill right now,” Murkowski said. “We’re looking to see if it can be included as part of Coast Guard authorization or how we might be able to move this. But I think we recognize that this is something that needs to be addressed.”

The senator also said Alaska’s salmon catch was facing renewed competition from farmed fish and a new possible competitor in genetically engineered fish. “The reputation of Alaska’s wild salmon, wild fish, it really is understood now and that has helped us dramatically. I think we’re up against some increased pressure though now. You’ve got the farmed market that has really come back quite aggressively, coming out of South America. Again they had their problems with disease and they’re back and I think we’re starting to see that impact the price,” she said. Murkowski said the delegation was unsuccessful in passing an amendment on genetically modified fish in a recent Food and Drug Admininstration bill but vowed to keep trying.

Trident Seafoods Petersburg plant manager Dave Ohmer asked for relief from federal bookkeeping requirements and regulation. “It goes on and on the way government is more and more affecting us and making it more and more difficult. In the processing business, it’s very clear, documentation, it’s unbelievable, the level of documentation. For fishermen who are not prepared to do it, it’s growing at the same level,” Ohmer said. He said the state government takes a much more reasonable approach to regulations on fishing and businesses. Murkowski encouraged him and anyone else to provide her office with specific examples of unreasonable government regulation.

The senator also met with city, school, hospital and civic leaders to discuss economic development during her time in Petersburg. She also toured new and completed construction projects and met with law enforcement about illegal narcotics in the community.