A 30-million dollar road construction project on Prince of Wales Island is underway this summer.

The work is a major upgrade to about 12 and half miles of road near the community of Naukati, an unincorporated community of 117 people on the western shore of Prince of Wales. Quentin Smith, roads program manager for the Forest Service, says the existing roadway will be widened and improved. “I think it’s officially listed as a lane and a half maintenance level four road, right now. And we’re going to a two lane highway, 24-foot, paved width, with shoulders,” Smith says.

The reconstruction work is requiring some substantial excavation of the soil underneath the roadway. Smith says the work will mean more than just a better road connection for Naukati. “At any time of the year, they have what can be a pretty poor road to drive,” he says. “And once we pave it the really big benefit for the community is that AP&T plans on putting in a transmission line just as soon as the road’s re-aligned. So that will cut the cost of power significantly for those members of the community in Naukati.” 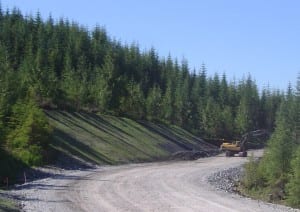 Courtesy of the U.S. Forest Service

Work started up this spring. It’s being paid for with a combination of state and federal highways dollars. Southeast Roadbuilders of Haines is the contracting company. Smith says many of the company’s 25 workers on the project are from communities on Prince of Wales.

Smith notes the road work will be partnered with some enhancement projects, possibly including parking lots improvements, a boat launch, trail or a picnic shelter near Sarkar Lake. Road reconstruction will also mean new culverts for the creeks that cross under the road. “There’s quite a few streams along this road where we don’t provide fish passage at all flows. We’re going to be improving that and making sure we do provide fish passage on all fish streams,” Smith says.

This summer’s work has detoured traffic to a nearby road. Work next year may not have a detour route available and could require driving delays for motorists on the island. The road work is scheduled for completion in October of 2014.