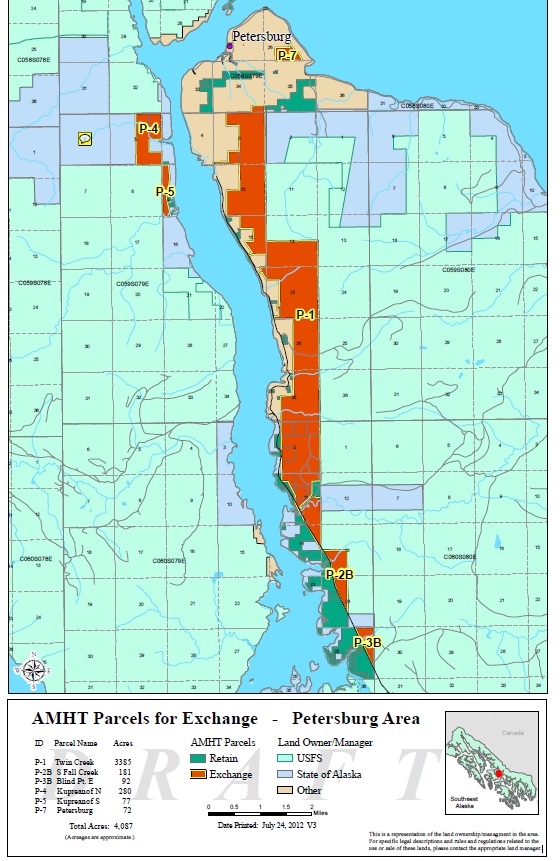 State and Federal officials say they are making progress on a proposed land exchange between the Alaska Mental Health Trust and the US Forest Service. The plan is aimed at conserving thousands of acres that are important in several southeast communities while providing the trust with more remote Tongass National Forest lands it can log. The plan was recently endorsed by a group of Tongass Stakeholders and the Forest service expects to start the environmental review process in the coming year. Matt Lichtenstein has this update.

The concept of the land exchange recently received the thumbs up from the Tongass Futures Roundtable. The collaborative group includes representatives from several environmental groups as well as tribal governments and corporations, the fishing industry and the US Forest Service. It formed six years ago to find some consensus on conservation and logging issues in the Tongass National Forest. The Alaska Mental Health Trust is not a member, but Trust Land Office director Greg Jones says the Roundtable’s endorsement is important.

“It’s a nice broad group of players affected by and want to be involved in the Tongass. Their support going into it essentially means to us that we have fairly broad support for the exchange,” says Jones.

The roundtable is not quite as broad as it used to be. Representatives for the state of Alaska, several communities and timber companies left last year and Governor Sean Parnell formed a new task force aimed at helping the timber industry. Jones says the Trust has offered to submit the land exchange for that group’s review as well.

According to Jones, the roundtable made a number of adjustments to various parcels but he says the concept hasn’t changed much since the plan came out in January.

It would still be an equal-value land swap with the Forest Service, “……trading to them some of our high-profile old-growth timber lands. Concerns have been expressed that logging them would have impacts on communities. Then from them, in return for those lands, we would get timber lands on Prince of Wales Island and at the head of Carole Inlet near Ketchikan and in areas that are currently being logged,” says Jones.

The specific parcels could still change but right now, the Trust is asking for about 20 thousand Acres from the Tongass. It’s offering up about 18 thousand acres of Trust land in exchange including lands in Petersburg, Wrangell, Ketchikan, Sitka, Meyers Chuck and Juneau. The trust plans to log on its newly acquired lands. The agency wants to generate a sustained yield of logs according to Jones, who says timber has always been the single most important source of revenue from Trust lands.

Jones says, “We have logged the land that we can that don’t have significant impacts into communities and are ready to begin logging those that may have such impacts. So, the timing of this exchange is extremely critical. We’d like to get it done as soon as possible and if we can, then we’ll be able to continue about our business of a sustained yield of timber revenue for the trust and we believe it will also help the southeast economy and the logging industry as well.”

The Trust owns nearly a million acres statewide and it’s mandated to make money from the property to help support mental health services in Alaska.

The impetus for the exchange originally came from Petersburg, where many residents along Mitkof Highway objected to an earlier trust plan to log the steep, landslide-prone hillsides above their homes. That’s the primary concern for Mitkof Highway Homeowners Association co-founder Ed Wood. He says the land exchange concept has a lot of merit.

“Its logical that communities are better served when large tracts of lands inside their boundaries are managed as public lands in the maximum interest of the people of these communities in a multiple use way. It also follows that large private land holders such as the Alaska Mental Health Trust are better able to monetize assets in more remote areas of less interest to local communities and without the conflicts and liabilities that go along with resource extraction within inhabited areas,” says Wood.

Wood calls the roundtable’s support a “really big deal” for the land exchange and he thinks it will improve its chances of success. 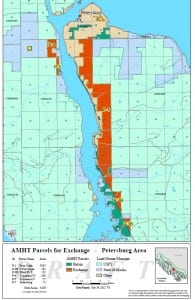 Map of Mental Health Lands along Wrangell Narrows in Petersburg

According to Tongass Supervisor Forest Cole, the Forest Service would see a number of benefits including the preservation of important viewsheds.

“Essentially, the majority of the lands that we would acquire are the backdrop of these communities where a lot of tourists…..Take Ketchikan for example. We have just short of a million people that dock in Ketchikan and the parcels that we would acquire from the Mental Health Trust are basically the backdrops of the communities. So there is some intrinsic value in maintaining those for tourists, for viewsheds, for access to the national forest,” Cole says.

He thinks it likely that the exchange will require a full Environmental Impact Statement.

The Southeast Alaska Conservation Council has supported the exchange in concept along with the rest of the Tongass Roundtable. According to SEACC Forest Program Director Bob Claus, his group has some concerns about the details but he says it’s still early in the process:.

The Forest Service expects the agency will put out a formal proposal for initial public review and comment in the next four or five months. That scoping phase would kick off the environmental review.