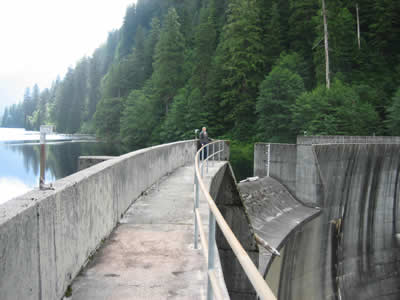 An electric power provider in southern Southeast Alaska is seeking state money to raise a hydro-electric dam near Ketchikan. The Southeast Alaska Power Agency is hoping the 12 million dollars needed to increase hydro capacity at Swan Lake will be included in the state’s capital budget under consideration this spring. The SEAPA board of directors met in Wrangell this month and heard an update on that and several other projects underway.

For iFriendly audio, click here:
The Southeast Alaska Power Agency sells power to the electric utilities in Wrangell, Petersburg and Ketchikan from two sources, Swan Lake near Ketchikan and Tyee Lake near Wrangell. At certain times of the year, the water stored in those two lakes is not enough to keep up with electrical demand in the communities. SEAPA is hoping to increase the height of the concrete dam at Swan Lake and is asking the state of Alaska for the money. 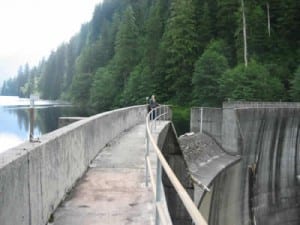 SEAPA CEO Trey Acteson told the agency’s board of directors that he spent time in Juneau in January lobbying for that capital budget item. “Everybody I talked to says yeah it’s a great project, we think it is, we support it. It’s just a matter of how much money’s in the bucket to divvy out this year.”

The shortage of hydro electric storage capacity was highlighted in a plan for Southeast energy needs released by the state last year. The project is expected to cost 12 point three million dollars for design and construction. Acteson said SEAPA is seeking the entire amount because of other large energy projects also needing state funding.

“The primary reason I’m asking for the whole enchilada is that if a bigger funding appropriation happens up north, say this year they decide the in-state gasline they wanna throw two billion at, or maybe Susitna-Watana, they wanna throw three billion at it or something this year, we’ve got a project that’s in the queue ready to go. So you stand a chance for full funding,” Acteson said.

Those other projects are a proposed dam on the Susitna River in the Mat-Su Valley and a proposed pipeline to bring natural gas from the North Slope to Fairbanks and Cook Inlet. Both those projects have price tags in the billions.

Acteson acknowledged pressure from legislators to reduce capital budget spending and said another possibility for funding was through the state’s renewable energy grant program. SEAPA estimates the project will add 25 percent to the water storage capacity at Swan Lake and will reduce the need for diesel generation during the winter. Local governments in Petersburg and Ketchikan have approved resolutions in support of the work and last month Canadian mining company Heatherdale Resources sent a letter to the Alaska Energy Authority supporting the state funding request. Heatherdale is exploring development of the Niblack precious metals mine on Prince of Wales Island and is considering an ore processing facility in Ketchikan.

In other projects, Acteson said work continues on the environmental review for a proposed powerline from Petersburg to Kake. A draft environmental impact statement for that project is expected out later this year.
The SEAPA board approved spending over $1.4 million for work at the outlet stream at Tyee Lake, the agency’s other hydro electric project south of Wrangell. That work will include removing a log jam at the outlet stream and installing a stream gauge.
The board also elected officers with Bob Sivertsen of Ketchikan elected chair, John Jensen of Petersburg elected vice chair and Sam Bergeron of Ketchikan secretary-treasurer.