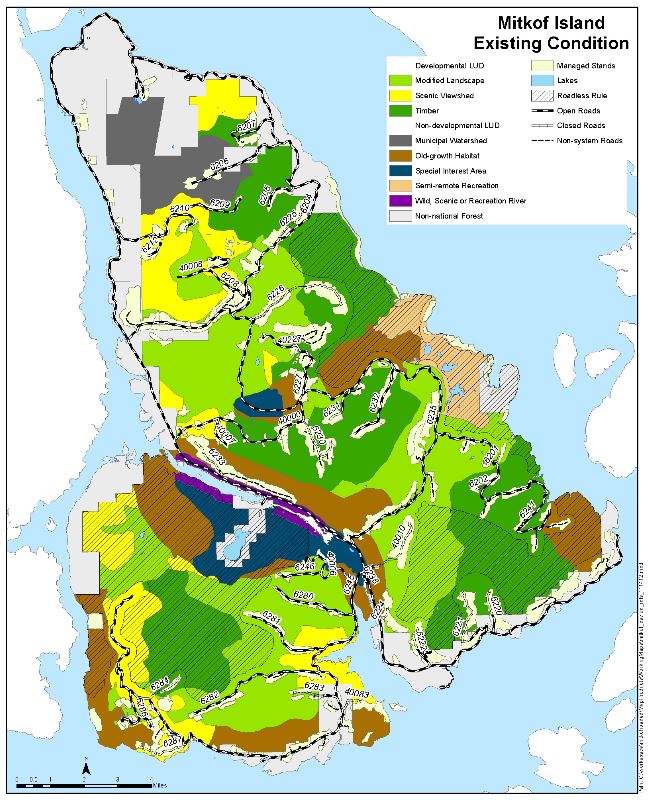 Draft plans for a small timber sale program on Mitkof Island near Petersburg could be out sometime this summer. That’s according U.S. Forest Service officials who held a public meeting to gather input on the idea in Petersburg earlier this month. Much of the discussion focused on the potential size of the program and the importance of preserving winter habitat for deer on the island. Matt Lichtenstein reports:
For mobile-friendly audio, click here. 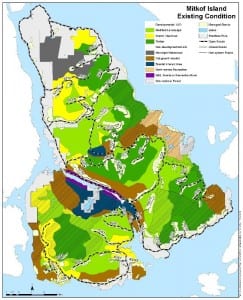 Whether or not Mitkof Island can provide enough timber to support existing small businesses and also attract new ones depends, in part, on their scale. That’s according to Petersburg District Ranger Jason Anderson who fielded questions about what a Mitkof timber sale program could look like. Anderson was confident the island had the capacity to support the kind of one or two person milling and firewood services that now operate on the island. However, according to Anderson, a larger mill needing millions of board feet a year would have to draw from other parts of the Tongass.

“Those are business decisions that those operators have to make. So as far as capacity, its not really a simple question cause its really based upon what those industry operators markets are, what their objectives are, how much milling they want to do, what kind of milling operations they want to try and get into business with or maintain if they have a business now. Ultimately the question about capacity for me is relevant to what’s suitable and available based upon all of the politics and policies of managing the timber resource on public lands,” said Anderson

Tongass lands on Mitkof have been logged for decades, with a road system constructed throughout most of the island. At the same time, the state has long-restricted the deer season and harvest limit because of low deer numbers.

So for several people at the meeting, like fisherman Eric Lee, the first priority for Mitkof was preservation of the remaining low elevation stands of large old trees that help deer survive the winters.

“I’m concerned about deer winter range. The amount of winter range that’s left on this island is not even enough to supply an adequate number of deer for our local subsistence use. And now the forest service is considering cutting more. I just don’t get it. Whatever there is that’s cut on this island has to be extremely small in my opinion,” said Lee.

Lee suggested the agency take a new approach and encourage the selective logging of high-quality trees for making musical instruments. Lee asserted that a few music wood trees could be as valuable as a whole hillside of clear-cut timber.

“One thing that’s pretty clear here is that, if stewardship contracting is going to require funding from old growth clear cutting, what we really have here is a fatally-flawed program that is not sustainable and it’s very clear that we’re not going to get our deer back, not for a long long time. And we’ve waited a long, long time,” Beebe said.

Around 20 local residents, including several Forest Service officials, took part in the meeting which also included discussion of stewardship contracting plans for Mitkof and Kupreanof Island’s Lindenberg Peninsula across the Wrangell Narrows from Petersburg. Logging there is already underway on the Tonka Timber Sale Project. The agency plans to use revenue from that large sale to do some tree thinning work aimed at improving deer habitat in the Lindenberg and Mitkof areas. Money will also go towards repairing some stream culverts that block fish passage. Like Mitkof, Lindenberg has also been heavily logged and roaded in the past. The State Board of Game just put the area under the same hunting restrictions already in place for Mitkof.

One challenge for District Ranger Anderson was how to avoid key deer habitat while also supplying some wood to small businesses.

“A lot of that land base that is outside the winter range, that is away from the roads, is probably not operable to most of your small scale operators,” So, Anderson questioned, “…if the intent is to try and provide opportunities for industry without impacting your lower-elevation deer winter range, how do you get the infrastructure into that high-elevation, less valuable range and still make for economic sales?”

Anderson suggested one option would be to build additional road to those areas. Another However, because of the costs, according to Anderson, the project is likely to impact some deer winter range. The agency is also looking at the possibility of harvesting some salvage and second growth trees.

Anderson couldn’t yet say how much timber will be offered on Mitkof and whether the project would require an Environmental Impact Statement, or a less-extensive Environmental Assessment. Anderson said his “gut” feeling was that it would be the latter, an EA, “My sense is just based up on the criteria we’ve talked about, the very real awareness of the concerns over deer habitat on this island that we’re not proposing a significant timber harvest activity on this island. The volume may be high but the idea would be long term metered out over small sales. The volume may not be high. We don’t know yet.”

Mike Bell, who used to log in the area, liked the idea of offering timber over a longer term.

“I really believe there could be be a number of operators on the island and I think the key to that is consistency of supply and that was the biggest problem, I think, in the past. You know like 15 years ago there was still a number of guys plugging away here and then it just all dried up and they thought they had a pretty good quality of life at the time and it was gone,” said Bell

A key question for some in the room was whether a consistent timber supply had to come at the expense of other users, like hunters. Retired mechanic Dave Randrup asked Anderson about sustainability for deer.

“Somehow the values for our deer and its habitat have been…….downgraded to just viability. There’s a difference,” Randrup said. He asked, “Is that just part of the tradeoff?”

Anderson replied, “I think it is. Yeah. I mean ultimately just based upon all the constraints that have yielded over the years, the baseline is that we have to maintain viable populations. That’s a requirement in public law.”

Forest Service Silviculturist Ben Case said he was attending the meeting as a private citizen and he acknowledged that young growth stands don’t provide a lot of deer winter range in heavy snow. However, Case said that with some management, second growth can eventually provide some habitat again after reaching a certain age.

Case maintained that there was value in having a variety of different logging prescriptions and land use designations on the tongass, “It’s not just a woodpile on the chopping block and a lot of those young growth stands are coming back……These stands are not deserts out there, biologically. Yeah there’s places that will improve and will need improvement through treatments but I think we’re kind of missing that. That’s what I’m hearing is this lack of credit for a diversity on the landscape.”

Forest Service officials are hoping to put out a formal proposal for the Mitkof Island Small Sales Project Sometime this summer.