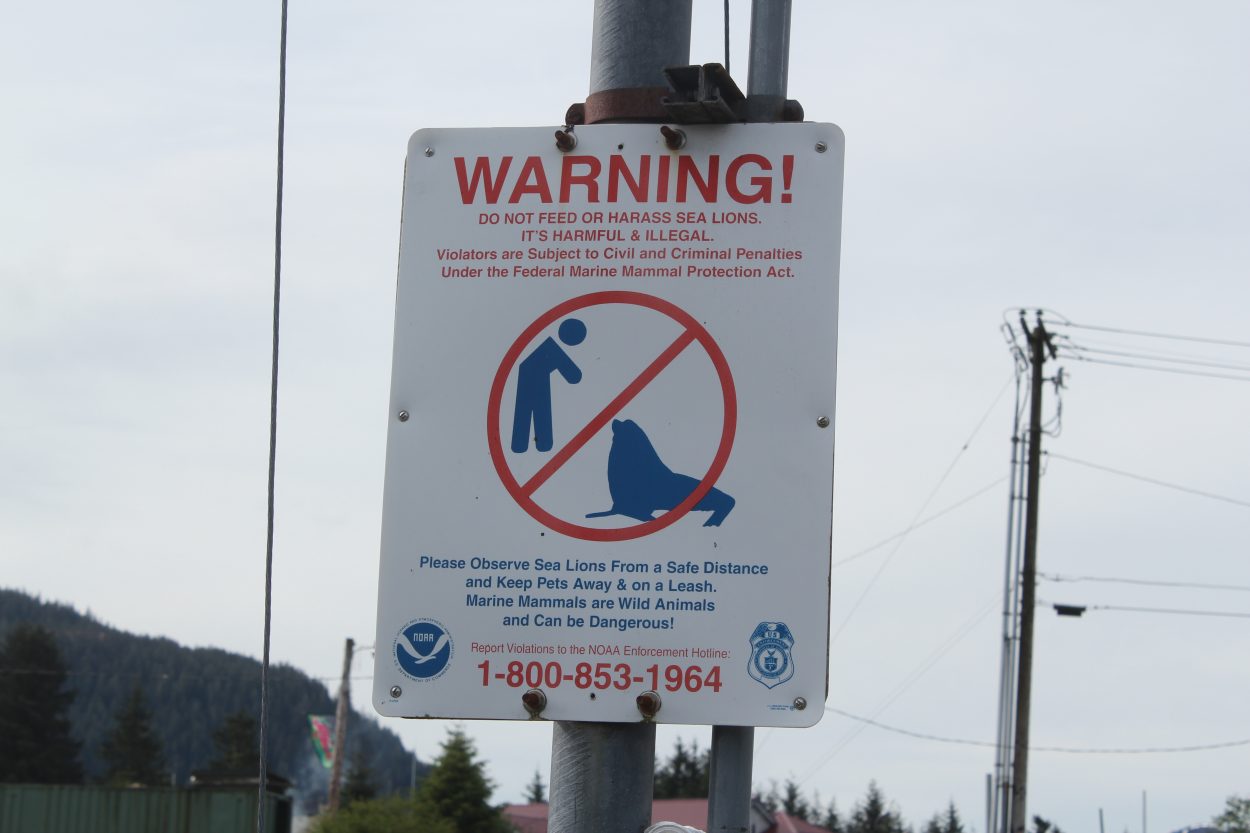 Petersburg’s officials and enforcement officers are cracking down on a growing problem in the borough’s harbor – sea lions. More and more of the creatures have arrived in the harbor, lured by the catch of local sport and commercial fishing fleets. As KFSK’s Robbie Feinberg reports, the problem has turned dangerous. 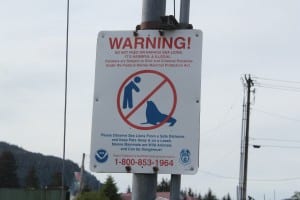 If you head out to Petersburg harbor on a typical day, you’re bound to see fishermen, gutting their catch at the harbor’s cleaning stations and throwing heads, bones and scraps into the water. But you’ll also see sea lions, searching for those remains, to eat.

The animals have started to overtake the area, hanging around near the docks to snag remains of a gutted fish. Recently, the problem has swelled. Petersburg Harbormaster Glo Wollen says that what started off as six sea lions a year ago has grow into twenty this year. And those animals have been getting more and more aggressive towards humans.

“And we’ve just been having so many reports of near close-calls this spring that we had to take drastic measures,” Wollen said.

But feeding the sea lions isn’t just dangerous. It’s illegal. Jerod Cook is with the National Marine Fisheries Service. He says that according to the Marine Mammal Protection Act, feeding sea lions in the wild is technically harassment, and it can carry fines of two hundred to five hundred dollars. After receiving more reports of sea lion attacks recently, Cook is worried.

“People have reported being charged by them and where the sea lion comes up and doesn’t jump completely up the dock but hits the dock with his chest,” Cook said. “Very aggressive. It’s very intimidating for folks. And the concern is that somebody’s going to get seriously hurt.”

The animals have even attacked harbor users in the past. Cook wants to fix the problem before it gets any worse, but his plan isn’t to sit at the dock and issue more tickets. Instead, he wants to work with the borough and the harbor to find a proactive solution to the problem. 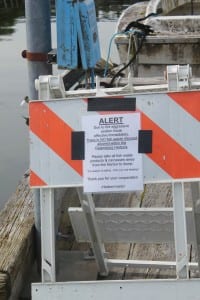 A warning at Petersburg’s North Harbor about fish waste.

Cook took the first step in that process on Monday when he brought up the issue at Petersburg’s assembly meeting. The members were receptive to fixing the problem, but they couldn’t agree on a solution just yet. One idea that the assembly floated was to follow in the footsteps of larger harbors like Sitka. In these harbors, the city added a large catch basin, a central spot to deposit fish carcasses that could then be tossed out farther out in the ocean or delivered to a cannery. But Wollen says that would require resources that she simply doesn’t have.

“Right now, I don’t have a staff that’s big enough to essentially wait for a carcass to come in to transfer it,” Wollen said. “At some point, maybe we’ll do some sort of thing. I’ve talked to some of the can companies and they don’t really want to put a tote out, collecting all the wildlife that will be attracted to something like that. From the land side – everything from rats to cats to all sort of things. It sounds like an easy solution, but when you follow it through, there are a lot of logistics that turn it into a bigger operation than just putting out a float and collecting it.”

Another potential solution was to have fishermen simply clean and filet their fish on the water. But Doug Fleming with the Alaska Department of fish and game pointed out that people need to comply with state rules.

”Regulations for fish like king salmon, or even halibut, we need to have fish brought in so they can be measured,” Fleming said.

Mayor Mark Jensen added that even if the borough does find a short term solution, like closing down a few cleaning stations, enforcing the sea lion rules won’t be easy.

“You know, talk about the signage that we’ve had in the harbor – ‘if it’s against the law, you’ll get a fine,'” Jensen said. “Just last week, my son and I are taking a skiff out of the water, he’s waiting for me to back the trailer down. And somebody dressing a fish at the loading ramp was complaining about the sea lions but on the other hand, they’re throwing their guts in the air to see if the sea lion can catch it. So do you put shock collars to all the people that go out? Do you have somebody sitting there the whole time? It’s a very complicated issue.”

Ultimately, the assembly wanted input from Petersburg’s harbor advisory board, and the topic will be on that group’s agenda later this month. Wollen has already removed a few of the fish cleaning stations from the harbor, and she’s alerted fishermen, too, letting them know that they need to be responsible for their own catch. But the hope is that the harbor board, borough and the fishermen can work together to find a better solution in the coming weeks and months.