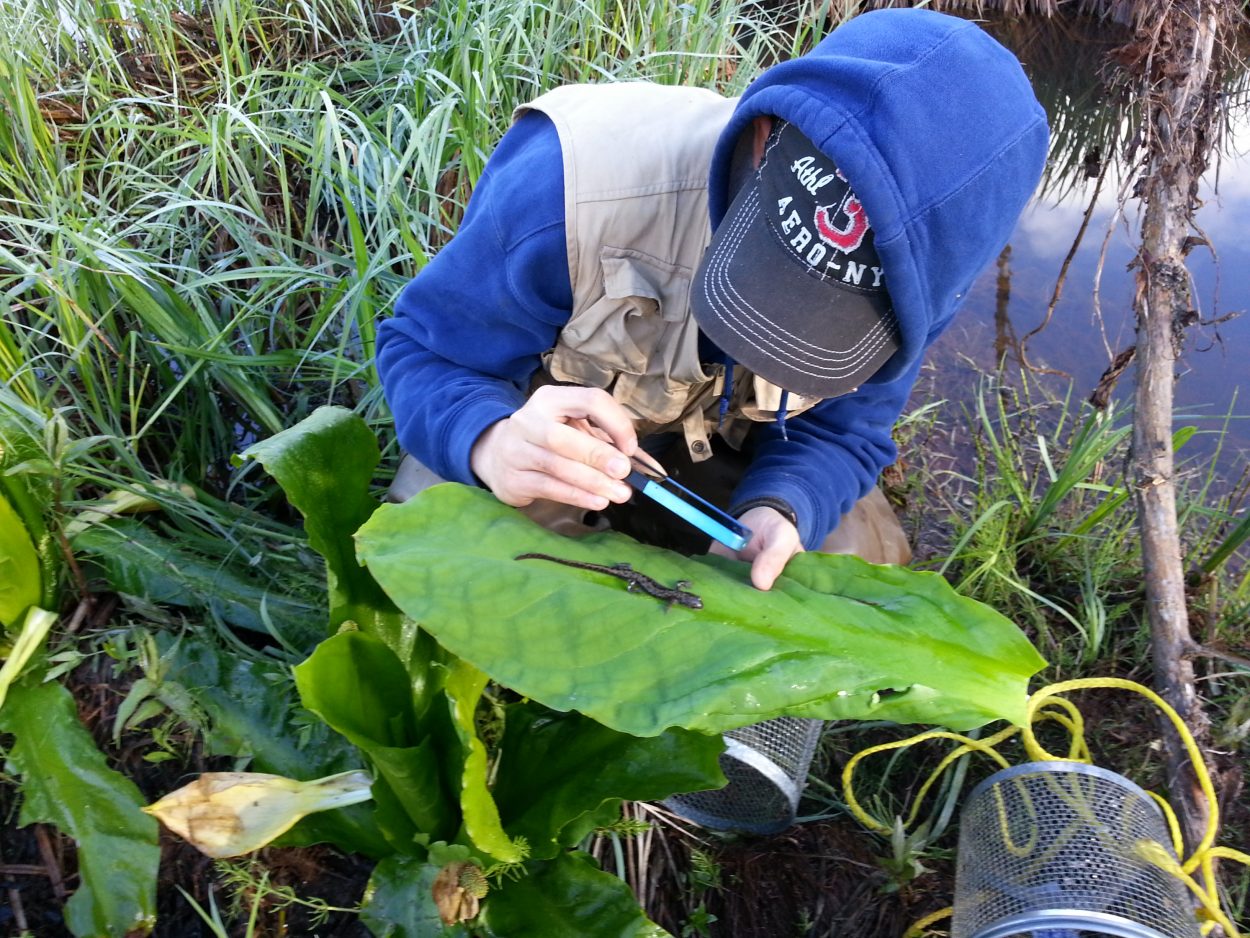 With its temperate rainforest climate, Southeast Alaska is a prime location for amphibians like frogs and salamanders. But the creatures have rarely been explored by scientists in the past. One Petersburg resident, with the help of a University of Alaska graduate student, is trying to change that. And they’re turning to the public for help. 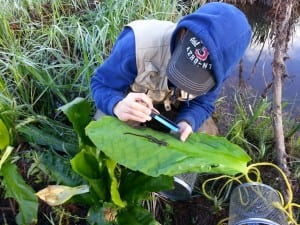 Seth Perry walks into a wooded, remote area, only a few miles from downtown Petersburg. Huge trees surround him. The only sign of human life here is a broken-down trailer, with vines crawling all over it. Perry walks towards it, crouches, and turns over a small rectangular piece of wood that’s fallen off the structure.

There, lying right below, are six newts, their blackish purple skin curled up into tiny balls the size of quarters. Perry picks one up and exposes its peach orange belly.

If you asked most Petersburg residents, they’d probably say they’ve never seen a single newt on the island. But Perry knows they’re here. He spent his childhood summers near Petersburg’s ball fields, searching for newts and wood frogs along ponds and brooks.

“I never found these much when I was kid,” he says. “I caught frogs. But these are some of my favorites now.”

As the years have passed, though, Perry has started to see less and less of the amphibians around. They’re still abundant, he says, but nowhere near the level they were decades ago. And that worries him. So when he saw a posting online a few years ago about a graduate student who wanted to explore the amphibians in the area, he saw an opportunity. He messaged the student online, and soon, they were planning a trip to explore the unknown remote islands of Southeast Alaska – an expedition across the Stikine River to chronicle every frog, newt, salamander and toad they could find.

Joshua Ream is that graduate student and Perry’s new research partner. Ream moved a few years ago to study at the University of Alaska in Fairbanks. He’s always loved learning about the outdoors – especially amphibians – but when he came to Alaska, he hit a brick wall. There was barely any information on Alaskan amphibians anywhere. The best he could find was a 1991 study by the US Forest Service, and that was it. Ream was shocked. He says there needs to be more research done, because amphibians are important.

“They play an important role in the food chains in many areas,” Ream says. “They can be abundant in many areas – they can be very abundant in different areas. They provide a great food source for birds and small mammals and fish. They also eat a huge quantity of mosquitoes, so if there’s a lot of mosquitoes and limited amphibians, there can be a health impact.”

But unfortunately, Ream says, science funding doesn’t consider that. Organizations have to weigh what studies are most important, and in Alaska, most of the time that ends up being studies on fish, and salmon, especially. Ream was able to snag one of those grants to fund his research last year, but this year, he wasn’t so lucky. So instead of looking for money from governmental organizations, Ream turned to an unlikely source: the public.

“So, I’ve been funding part of the research just through my own personal funds,” Ream says. “But my advisor suggested several months ago that I look into alternative funding sources, and one of these was this Go Fund Me project. And then Seth Perry down in Petersburg brought it up, so I figured I needed to look into it.”

That plan – crowdfunding – is a relatively new idea for scientists. Websites like Kickstarter and IndieGoGo have enabled a lot of musicians and inventors to become successful, but for scientists, it’s no sure thing. But luckily for Ream, it worked. He raised the money, and Ream and Perry came out this summer to cruise island to island along the Stikine. They just returned from their second expedition last month. They traveled through the Wrangell and Petersburg areas, making stops on the Stikine River and other places. Ream says the experience was informative, but what made it truly unique is that no one’s really done it before.

“I never know when I’m gonna find something that no one else has in the area,” Ream says. “I think in the lower 48, many of those questions were answered 100 or 200 years ago in their populations, and now they’re looking at very fine-tuned questions regarding species populations. I think of myself being in a similar position as explorers like Darwin or Linnaeus, people who were discovering new species. I feel like that’s an opportunity that I have when I’m out on the landscape like that.”

So far, Ream hasn’t exactly had that kind of impact. But all in all, this year’s trip was pretty successful. He and Perry found twin toed salamanders near the Twin Lakes on the Stikine, which some had thought had disappeared in the past. At Mallard Slough, near Petersburg, they found long toed salamanders – notable for the slender yellow stripes down their backs.

Ream says he can’t make any conclusions about what’s happening to the animals quite yet. But his goal is to document exactly what species are in the area and to look for changes to those species into the future. And he’s found a way to continue compiling research when he’s not in the Stikine, too – by placing log books in cabins along the river so visitors can search for amphibians and record what they see, becoming scientists themselves.

For the future, Ream and Perry plan to keep coming out every year to figure out exactly what’s going on with the frogs. The money’s been tight, they say, but if the crowd funding worked once, they think they can make it work again.