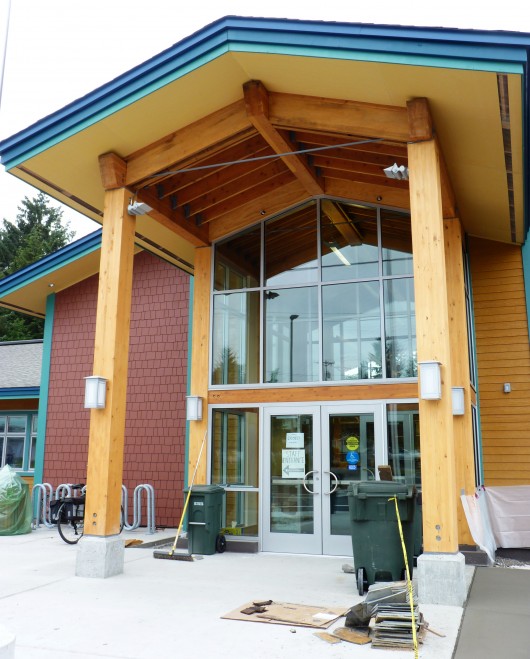 The new Petersburg Public Library is nearing its opening date. But the shelving is delayed, which will push back the date. Ed Schoenfeld/CoastAlaska photo.

The opening date for Petersburg’s new public library is being pushed back.

But Borough Librarian Tara Alcock says the shelving is delayed.

“What we know right now is that they will not meet the scheduled delivery and installation of Aug. 20th that we had planned our entire move around,” she says.

She doesn’t have a new opening date, but hopes it will be just a few weeks later.

The problem is that the shelves’ manufacturer, a company called Library Bureau, isn’t done making them.

And that’s not all.

“They’re going to be shipped up from down south. And, so, from my perspective, having so many things shipped, that’s also an unknown,” Alcock says. “It’s one thing for the manufacturers to put it out, maybe in another week, but if that were to happen, they need to make it safely here, undamaged as well.”

The old library, in Petersburg’s municipal building, shut down for the move July 26th.

The new library looks mostly done from the outside. Inside, staff and construction crews are putting finishing touches on the building … except the shelving.

Library board member Anne Hurt is willing to be patient.

“Part of it is to do with manufacturing and the other part is living in Alaska and you just have to roll with these things,” Hurt says.

It’s been in the municipal building since 1960. It first opened in 1932 in the Telephone Exchange Building.