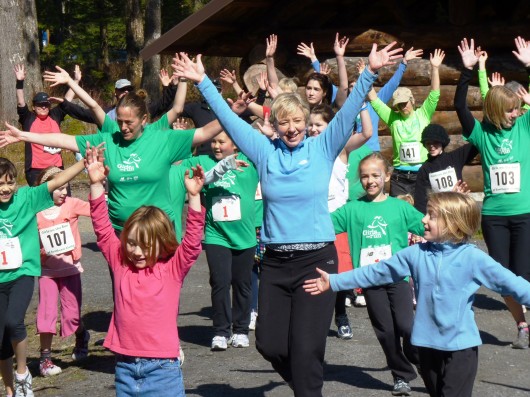 Girls on the Run participants warm up for an everyone-wins race starting at Petersburg’s Sandy Beach in May of 2011. Such programs, plus strong schools and businesses, helped get the city named as the most young-family-friendly in Alaska. File photo.

Alaska’s Little Norway has just been named the friendliest community for young families in the state. It’s a designation made by a San Francisco-based consumer-advocacy website. And while there are tons of “best-of” lists out there, this one might mean something.

Not long ago, Sally Dwyer was checking her email at the Petersburg Chamber of Commerce. She found an intriguing message.

It said the Southeast city had been selected as the best town in Alaska for young families.

“When I opened it, I went, ‘How’d they find out that we’re one of the best-keep secrets in Alaska?’ And then I realized they did their homework and discovered it on their own,” Dwyer says.

The recognition comes from a California website company called NerdWallet.

It’s one of those high-tech research firms that gives its employees catered lunches, happy hours and company trips to cool places like Lake Tahoe.

But mostly, it bills itself as a consumer website, providing independent comparisons of credit card charges, banking costs, hospital ratings and so on.

“We kind of go into all the major financial decisions you have to make and we provide information that helps consumers make better informed decisions,” says Divya Raghavan, a NerdWallet analyst.

She says Petersburg hit No. 1 for its ratings on three key factors. (Read more about the rankings.)

One is schools, with the town hitting nine out of 10 items on NerdWallet’s educational checklist. Another is growth, including population and economy.

The third just might surprise you, if you’ve been to the grocery store lately.

“So we looked at the medium home costs and the monthly ownership costs and Petersburg is one of the most affordable for young families in Alaska,” she says.

After Petersburg, nine other Alaska cities – none of them big – were rated the most livable for young families.

Raghavan says the ratings are based on a data model, using U.S. Census Bureau information. But there’s a human hand in there too.

It’s still a business. It researches and publicizes these lists to bring traffic to its website.

But Raghavan says they’re based on real information.

“These definitely aren’t due to chance. They’re due to very conscious decisions that the residents of these cities and their governments make,” she says.

She’s going to bring the best-of rating up with her board, but she already has plans.

“I’m hoping we can use it with our marketing tolls when people want relocation  information. We can send them this clip and say this is what a lot of people think about our town,” Dwyer says.

Petersburg is the highest vote-getter in a Yachting Magazine Facebook poll. It’s asking which is the top yachting town in America. And right now, it’s outpolling nine other cities, including Seattle, New Orleans and San Francisco.

Dweyer hopes you’ll go to the magazine’s page and vote for the city of your choice – as long as it’s Petersburg.