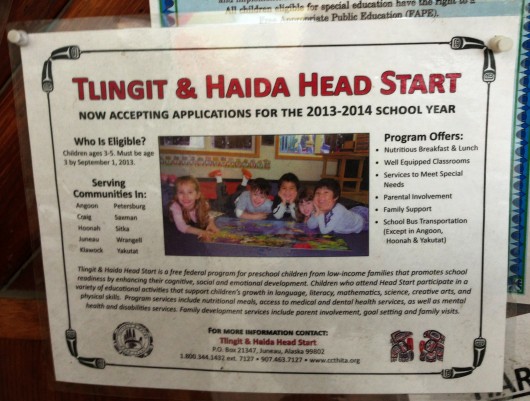 A Head Start advertisement is posted on a community bulletin board in Petersburg. The program will delay opening three weeks due to budget cuts.

The Tlingit-Haida Central Council’s Head Start program serves more than 250 Southeast Alaska preschoolers. But they’ll have less time in the classroom this year due to budget cuts tied to sequestration. We took a  this look at the program and the impacts of lower funding.

Savann Guthrie, her husband Alex and their three kids have all been part of Petersburg’s Head Start program, run by Tlingit-Haida Central Council, for years.

“My first little girl craved socialization. We couldn’t give her enough of it and so for her I thought it would be a real good place to get to socialize,” she says. 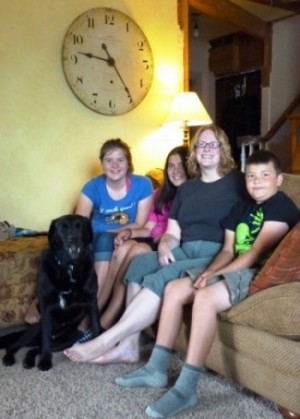 Guthrie started taking her daughter just two days a week. Soon, both of them, and later, the other Guthrie kids, became regulars.

Family contact is a key part of Head Start, a federal preschool education and screening program that began in the mid-‘60s. Along with working with kids, it helps parents learn more about caring for young children, and preparing them for school.

But there will be less of that this year.

Haines, Kake, Hydaburg and Ketchikan also have Head Start classrooms. They’re run by the Anchorage-based Rural Alaska Community Action Program. Officials could not be reached by our deadline for comment on how they’re handling the budget cuts.

Head Start also provides preschoolers with breakfast and lunch, and teaches them basic hygiene, such as brushing their teeth.

Some don’t get that at home.

“We help identify any potential issues that might hold them up later on with their schooling – hearing tests, eye tests and other, more severe types of disabilities,” Rinehart says.

The budget cuts will reduce classroom days by close to 10 percent. It will also lower hours – and pay – for Tlingit-Haida 55 staffers.

“There are also other preschool programs and parents who are looking for places for children start to worry when school starts up in the fall. And so, Head Start may not be their first consideration because of that,” McCullough says.

As a tribal program, Tlingit-Haida Head Start gives a preference for Native preschoolers. It also favors low-income children, though others, such as the Guthries, still get in.

Rinehart says he polled staff about the best way to address the budget cut.

“We provided options from a shorter work week to ending the school year earlier or starting the next school year later. And our survey overwhelmingly showed support for a later start-up,” Rinehart says.

Officials say flat funding doesn’t keep up with inflation. A number of grants are no longer available, and that’s hurt the program too.

Back at the Guthrie house, Savann is thinking about sequestration’s impacts.

“Any time you’re cutting the money, who you’re really hurting are the people and the families and the kids who need it the most,” she says.

Her husband and children are Tlingit and Tsimshian and she says her family has enjoyed the cultural aspects of the program.

And she encourages other parents to think about joining too.