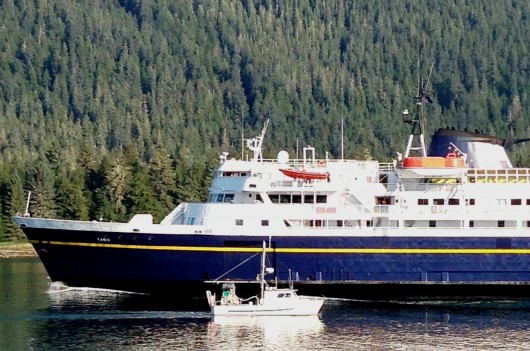 The ferry Taku sails into the Wrangell Narrows off Petersburg on its way south earlier this month. The draft summer 2014 ferry schedule keeps it sailing from Prince Rupert to northern Southeast. Ed Schoenfeld/CoastAlaska News photo.

The state Transportation Department wants feedback on its plan for next summer’s ferry sailings.

The draft schedule continues the ferry Matanuska on a route from Prince Rupert, British Columbia, to northern Southeast.

The Malaspina will cover the Juneau-Haines-Skagway route most days.

The fast ferry Fairweather will sail four days a week to Sitka in the early summer, then increase to six days a week. It will also serve Petersburg once a week.

The Columbia and the Kennicott will each sail to Bellingham once a week. The Kennicott’s run will continue across the Gulf of Alaska.

Other details are available online.

A public-comment teleconference will be held Sept. 11th at the system’s Ketchikan headquarters. Comments will be taken in person and via teleconference.

Meanwhile, the state’s Marine Transportation Advisory Board is meeting this week on the Fairweather and at Sitka’s Harrigan Centennial Hall.

Board members will get updates on the design for the Alaska Class Ferry dayboat shuttle. Two ships will be built for the Juneau-Haines-Skagway route.

They will also address the process for replacing the ferry Tustumena, which serves Homer, Kodiak and other parts of Southwest Alaska. It’s been laid up for repairs this summer.