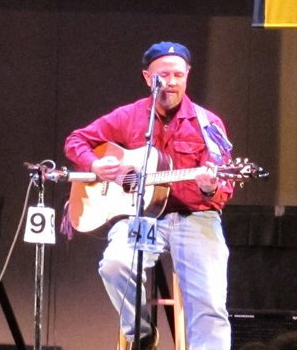 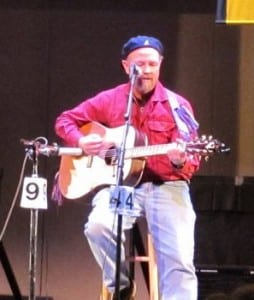 Three groups of Petersburg musicians will be performing at the 40th annual Alaska Folk Festival that’s happening next week, April 7-13. Some are new to the big event and some are veterans.

Angela Denning stopped into Kito’s Bar in Petersburg where a few of them were practicing up.

The knocking of pool balls accent the music coming from the stage. It’s the usual sound at open mic night. The musicians agree–it’s not an auditorium–but it’s consistently available to them every Thursday to play together. And tonight, the duo Mc2 (M-C Squared) is using it as an opportunity to try out some tunes for Juneau.

“Alec and I met many years ago at different musical fundraisers for the community of Petersburg long before we were a couple,” Nicole says, “and so we’ve been playing together as a duet for about 7 or 8 years now.”

Alec says he’s been songwriting his whole life but he’s gotten more serious about it over the last few years. So, what does he write about?

“I like to write songs about boats and fishing, that’s sort of what started it off,” Alec says. “There’s not that many songs around about local stuff and I thought it would be fun.”

The song “Emily Jane” is about the local boat, which was sunk and then salvaged out of Frederick Sound.

Although Nicole has performed at the Juneau festival with other musicians, it will be the McMurren’s debut together.

Angela: “What are you looking forward to the most out of the festival?”
Nicole: “Hearing some good music and getting inspired to play some different tunes.”
Alec: “Yeah, the whole spirit of the thing, just be a part of it, to participate, yeah, to participate and learn stuff and meet people, yeah, for sure it’s always an opportunity for like-minded or different minded people that would bend you in their direction.”
Nicole: “It’s a good vibe.”

On the stage warming up is Scott Hursey, a long-time Petersburg singer songwriter. He too will be performing at the Juneau Folk Fest as he’s done many times before. In fact, he’s not quite sure how many times he’s been there.

Scott: “This is the 40th annual Folk Festival. I played at…the first time I played at the second one, so it was 39 years ago that I played at the first one. And I played, I don’t know, 10 or 15 in a row and I took a break for a while and been back off and on since then. So many different bands, by myself a few times, I’m going to play by myself this time, I think, so it will be the first time in quite a few years that I’ve done a solo act. . . played with several different bands there before.”
Angela: “What’s it like for somebody who hasn’t been there?”
Scott: “It’s a lot of fun. I mean there’s music all over town. Lots of different venues, the bars, the Silver Bow has a singer songwriter event of Friday and Saturday afternoon, lots of workshops, they’re dances, besides the main stage there are a couple of different dance events. There’s a dance stage that goes on with different bands for two nights. You know, the crowds can be several hundred people on the evening concerts.”
Angela: “Do you ever get the jitters, I mean, you’ve been doing it for so many years, do you ever get jitters still?”
Scott: “I get the jitters but it’s a lot of fun. The crowd there is probably the best crowd you’ll ever play in front of so, it’s really fun to get up in front of them because they’re very, very welcoming.”
Angela: “How often do you play? There’s an open mic every Thursday. . . do you play at home?”
Scott: “Oh yeah, I play almost every day.”
Angela: “And what does that do for you? What do you like about it?”
Scott: “It’s a creative outlet, it’s relaxing. You know, we get wrapped up in the work we do and it’s a nice way to get away from that and then also when I can play with friends around town it’s a good way to interact with people with people and have a great time. It’s really great to play with other musicians because you feed off of each other and it’s fun to create together.”
Angela: “So, a different kind of connection than you’d have any other way?”
Scott: “Oh, yeah, definitely.”

It’s this kind of connection that brings Nicole McMurren and her tambourine back onto the stage to join Hursey for a duet.

The McMurrens–Mc2–perform Saturday at 2:30 p.m.

The youth group, Double Rock Band, will also be performing at the festival. They’ll take the stage Friday at 10:15 p.m. just before Hursey. We’ll hear from the young musicians in KFSK news Monday.

KRNN in Juneau is audio streaming the entire Folk Fest, and video streaming each evening at krnn.org There is no video stream during the Sat. and Sun. afternoon stage acts.