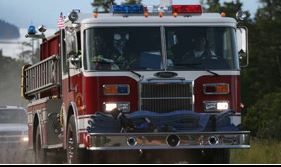 A fire Friday evening caused damage to an apartment upstairs of Lee’s Clothing in downtown Petersburg. There were no major injuries from the fire although four people were treated by medics.

The fire started in the kitchen when the resident of the apartment fell asleep after he had started to cook dinner. A boiling pot of oil caught on fire which then spread. Dave Berg, Spokesman for the Petersburg Fire Department, says the resident woke up and responded quickly.

“He woke up fortunately when the smoke was coming down, he heard the pops and rattles of the fire on the stove,” Berg says. “He woke up and realized it was more than he could handle. First of all he tried to put out the grease fire by putting something, a plate over the pot but it was blazing up so hot already he couldn’t get close enough to do that and he got slightly injured. So, he ran out into the hall, he got a fire extinguisher, there were a couple of them in the hallway and he came back in and he was able to extinguish the fire pretty much all himself.”

During this time, someone had made an emergency call to the police dispatch. The call came in at 6:15 p.m.

By the time fire fighters and medics arrived with two fire trucks and an ambulance, there was only some smoldering hot spots in parts of the ceiling which they put out.

The resident of the apartment was treated for a slight burn on his forehead and arms. Also, two women and an infant who were living nearby were taken to the Petersburg Medical Center for possible smoke inhalation.

All four people were released shortly after.

The fire department was on scene for about 45 minutes. Even though the fire was short lived, Berg says the damage was extensive to the kitchen area.

“Most of the kitchen will have to be replaced, there was a lot of smoke damage in the apartment,” Berg says. “The ceiling above the kitchen was blackened by smoke and fire and heavy smoke damage throughout the unit.”

To a lesser degree, smoke reached into the nearby apartments and downstairs as well. The fire department used a ventilation system to try to clean out the air in those areas.

All told, Berg says it could have been a lot worse if the resident hadn’t woken up right away.

“It could’ve been very bad because the smoke was definitely coming down very quickly,” Berg says. “Fortunately, he knew exactly where there was a fire extinguisher in the hall and was able to use it to extinguish the fire to a great extent and to that we think that the building was certainly saved from further damage.”

Berg says the fire department, which is run by volunteers, did a great job responding to the fire.