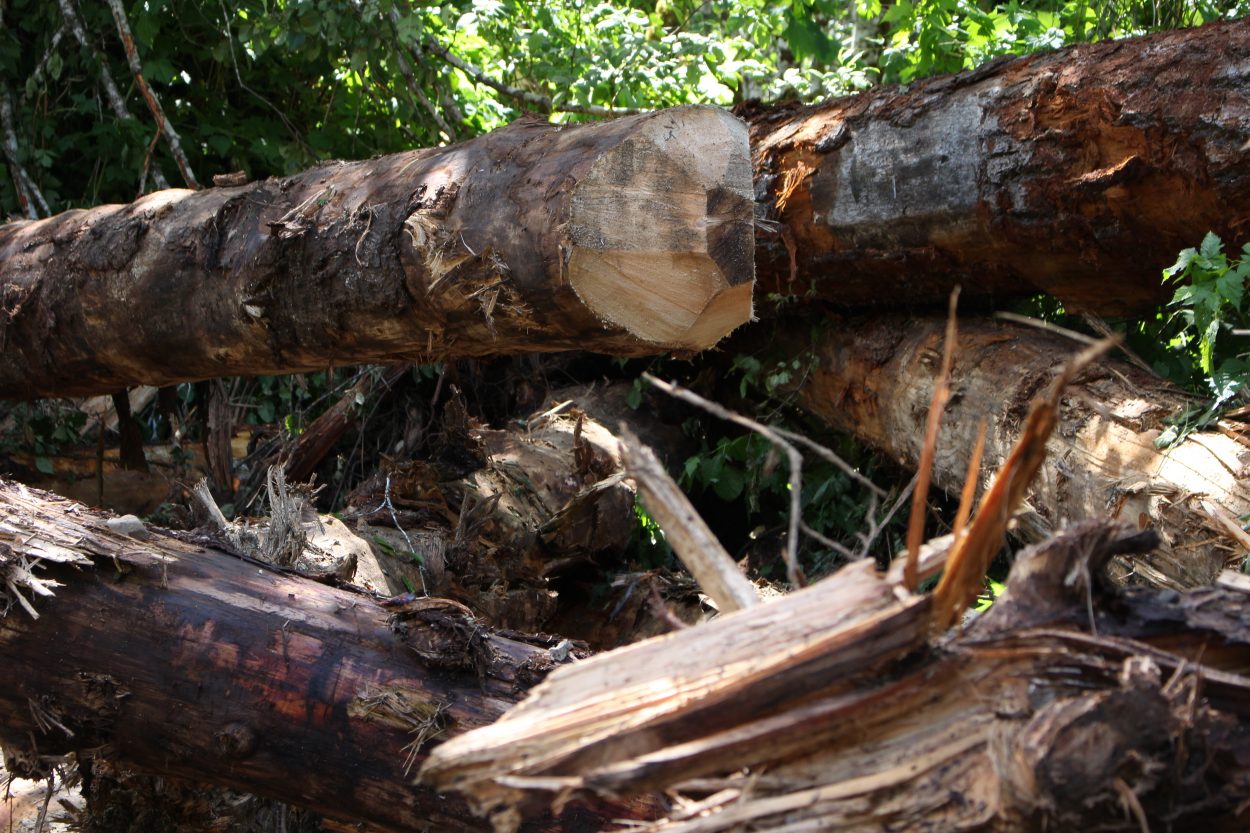 On a remote corner of the Tongass National Forest, a six-year-long stream restoration project is wrapping up. The cost: an estimated $1.2 million dollars, funded largely from grants obtained by the Nature Conservancy. The project is intended to restore salmon streams damaged over 40 years ago on Kuiu Island.

From the float plane, you can see turquoise water and patches of coastal islands. Then, Kuiu appears, swallowing up the landscape with dense forest. It’s nearly five times the size of Seattle with only a handful of residents. This is the site of the stream restoration project.

Heath Whittacre, from the U.S. Forest Service, drives us to the location in his mud splattered SUV. “I’m a water guy. A hydrologist study of water.” His job is basically quality control for nearby streams, rivers, and aquatic habitat. He’s been out here, sometimes for months at a time, overseeing the project. “We call it the Kuiu island resort and spa. It’s great. We have excellent accommodations, an infinity, pool, massage parlor,” Whitacre jokes. 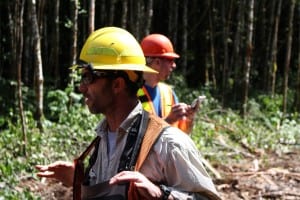 The location is remote, but there’s electricity from a generator and basic housing. There’s also miles of unpaved logging roads to get around the island. To understand the necessity of the stream restoration, you first need to know the history of Kuiu. In the 60s and 70s, there were no regulated logging buffers along salmon streams. “So they able to cut all the streams immediately adjacent to stream banks as well it use the streams themselves as yarding corridors.”

The Forest Service anticipated that salmon spawning might be a problem. In 1970, along with the Alaska Department of Fish & Game, they tested out a theory. They removed log jams from streams to increase water flow. “You get more stream power and with more stream power you get larger cobble size.” After that, sediment the size of a grapefruit was tumbling down the waterway–further eroding the channel. Whitacre says, almost 45 years later, we’re starting to see the effects. There are less deep, cool pools for salmon to spawn, declining populations of Coho and Chum. “I think that we’ve learned that when you manipulate the channel like that, there’s a lot more that needs to go into it when you’re thinking about how we’re going to fix something. Fix something that’s not broken. That’s a messy business sometimes.” 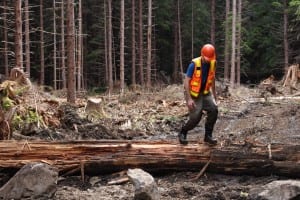 A study estimated that in streams logged in Southeast Alaska, it could take up to 250 years for habitat to recover. That is–if nothing is done about it. Norm Cohen, the Southeast Alaska Program Director for the Nature Conservancy, says, if we can take actions now “these streams will be as productive as possible for the years to come.”

From the float plane, it’s a long drive to Saginaw Creek–one of the four streams on Kuiu Island that’s being restored. After changing into waders, we slather on bug spray and walk down the channel to see the work. The restoration itself looks like a really hard game of giant pick up sticks: a tangled mass of young and old growth trees, some of the roots are still intact. “You know, you kind of look at what nature provides and try to emulate that, kinda like a big puzzle,” Whitacre says.

The structure is perpendicular to the stream. In this case, to trap a pool of water. Nature is copied for its functionality, but also its aesthetic. Whitacre points to the end of log that looks like it’s been chewed on. “We call it beaverizing where instead of a cut face on a log, we round out the tips with a chainsaw where it gives a beaverized effect.” 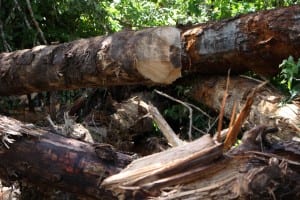 “Beaverized” logs along the Saginaw Creek

The project used about 1,100 trees, harvested from around the island. To move the heavy pieces, contractors used a helicopter and an excavator. Pathways were created out of old spur roads leftover from timber harvest. Whitacre says, initially, the scale seemed alarming. “It’s not something we’re used to seeing, heavy equipment in streams this size. It’s kinda one of those ‘whoa moments,’ but when you see the final product and see it coming together, this is the only way that could happen.”

Johnny Zutz, from Fish and Game, agrees. “It doesn’t look pretty and especially in the short term you’re wondering why they’re doing it.” He helped write the permit, authorizing heavy equipment in the stream. It’s his first time out at Kuiu to see the restoration. “They look like once you get a couple of flushing flows they’re going to look pretty nice.” 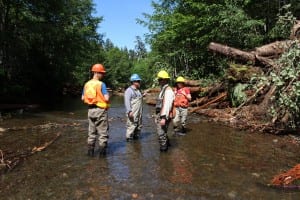 We walk down the middle of the Saginaw creek. Whitacre points to a shallow pool of water about a foot deep. “We’re looking at whole bunch of Coho fry. They look like they’re just hanging out but they’re in feeding lanes right now. They’re all pointed up stream. They get themselves in a pocket where they pop out and eat like that one did just now.” Whitacre says, as the stream restoration project nears its completion, he’s hoping for what every hydrologist wants: a flood.

The next stream to be restored is Luck Creek on Prince of Wales Island.