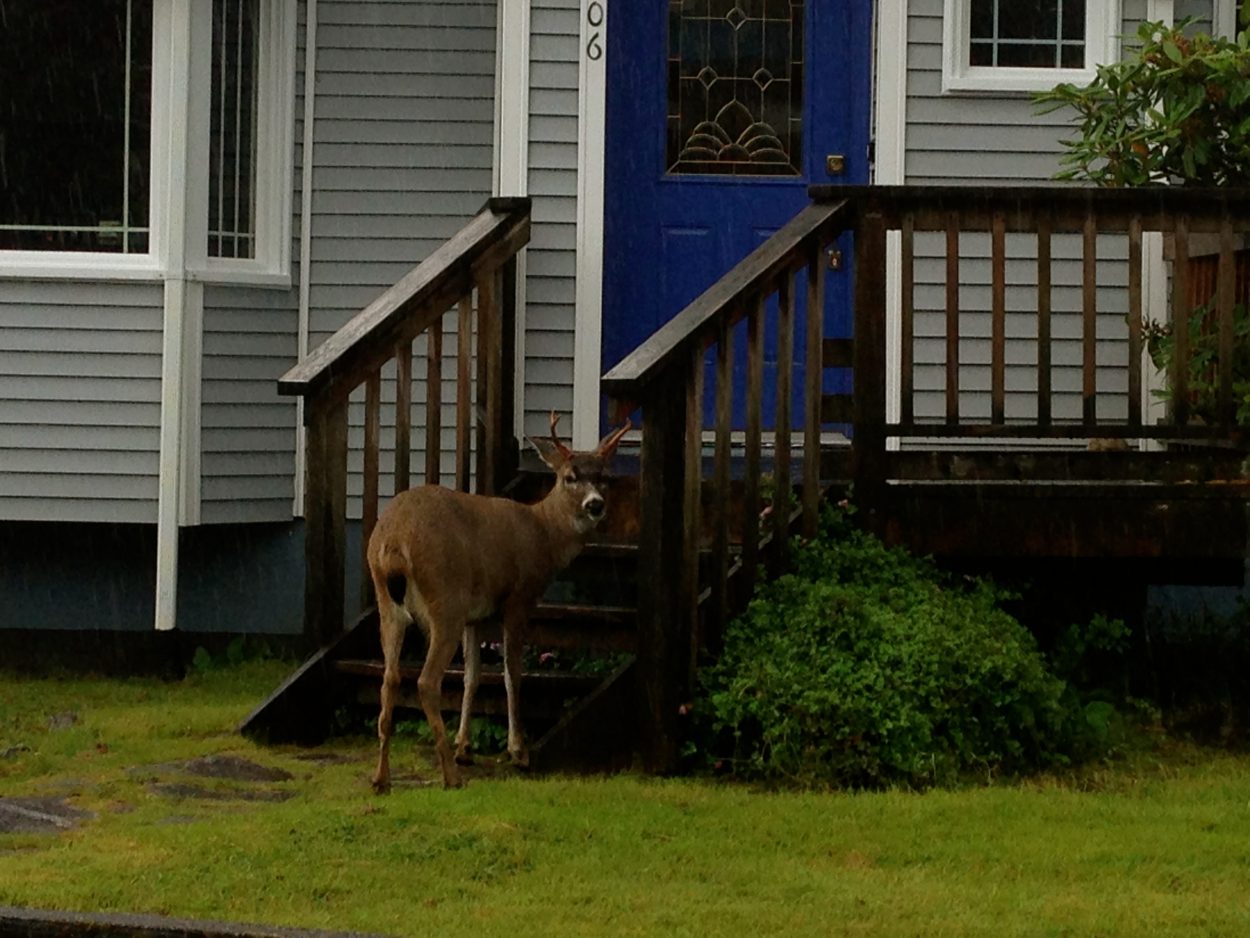 Deer hunting is open in some areas in the Unit 3 islands near Petersburg. On the mainland in Unit 1-B, hunters can take two bucks. On Prince of Wales, hunters can take four bucks. However, hunting near town continues to be more restricted.

Although the deer population within Petersburg’s city limits is thriving, out of town, it’s a different story.
Mitkof Island and Lindenberg Peninsula on Kupreanof will be open to deer hunting for only a few weeks starting October 15. The limit is one buck.

Rich Lowell is the Area Wildlife Biologist for the Alaska Department of Fish and Game in Petersburg.

“The forecast remains pretty poor,” Lowell says. “The reason for the decline in the population remains somewhat unknown. We know that we had a series of deep snow winters. We had three winters back to back with well above average snow fall.”

Deep snow is hard on deer. The harshest was the winter of 2006-07 when a record of over 222 inches fell. That was followed by two more snowy years.

However, weather isn’t the only factor affecting the deer. Predators like wolves and black bear also play a role.

“We don’t have a really good understanding which of these factors is the primary cause, and in fact, it’s probably likely that those factors are all working in concert and serving to keep our deer population at low levels,” Lowell says.

What managers do know is that the local deer population used to be higher. Just on Mitkof Island, harvests used to be around 150 deer annually. Three years ago, it fell to just 21.

Now biologists are trying to figure out ways to restore those numbers. But just like it’s hard for managers to survey the moose population in dense forest, figuring out the deer population is also challenging.

“Being able to count deer in habitats where you simply cannot see them on traditional aerial surveys makes it difficult,” Lowell says.

Lowell says they are never going to get a precise population estimate on deer. But they do have a survey method that they hope will shed some light on the situation.

That’s a scientific way of saying that they study the deer scat.

“Follow a transect line and you count the number of piles of poop within a certain distance and then changes in the density of those pellet groups over time, gives you some idea of deer abundance,” Lowell says.

This type of surveying gives biologists a chance to compare deer populations from island to island in the region and get an idea of whether or not the population is on an increasing or decreasing trend.

In recent years, managers have also been taking DNA samples from the deer pellets. Over time, they hope this will allow them to get a more accurate population and density estimate by comparing the numbers of deer that they’ve already tested to the new ones.

At this point, they are not sure how successful the technique will be.

“Whether or not the DNA based method will work for us here is confounded a little bit by the fact that our deer are at such low density that you may not get enough marks or recaptures in the population to derive some estimate,” Lowell says.

Lowell does have hope, though. Samples that they took last Spring are at the lab right now getting processed. Another new method managers are trying is a browse vegetation survey to see if that is a limiting factor. They are looking at whether the nutrients in local plant life can support more deer.

There is one method that seems to remain pretty reliable in reflecting how the deer population is doing and that is hunter harvest.

“If there are a lot of deer there, hunters are going to bring more deer to bag,” Lowell says. “And in recent years our harvest of deer has really declined.”

While deer harvests out of town are low, managers hope hunters take advantage of the increased opportunity for bow hunting the deer that hang out closer to town. That season is open October 15 through December 15 and the bag limit is two bucks.

The remainder of Unit 3 is open for two bulls from August 1 to November 30.

Lowell says hunters should check the regulations before heading out to make sure that they are hunting legally.

At the same time that deer hunting is open, there is a limited elk hunt going on. September was open to archery-only hunting on Etolin Island where elk were introduced years ago. Now, there is two drawing rifle hunts. They are the first two weeks of October and then another one the last two weeks of the month. Depending on the number of elk harvested, they’ll open up a registration hunt in late November.

According to Lowell, over the last five years, the Unit 3 elk harvest has averaged seven animals.